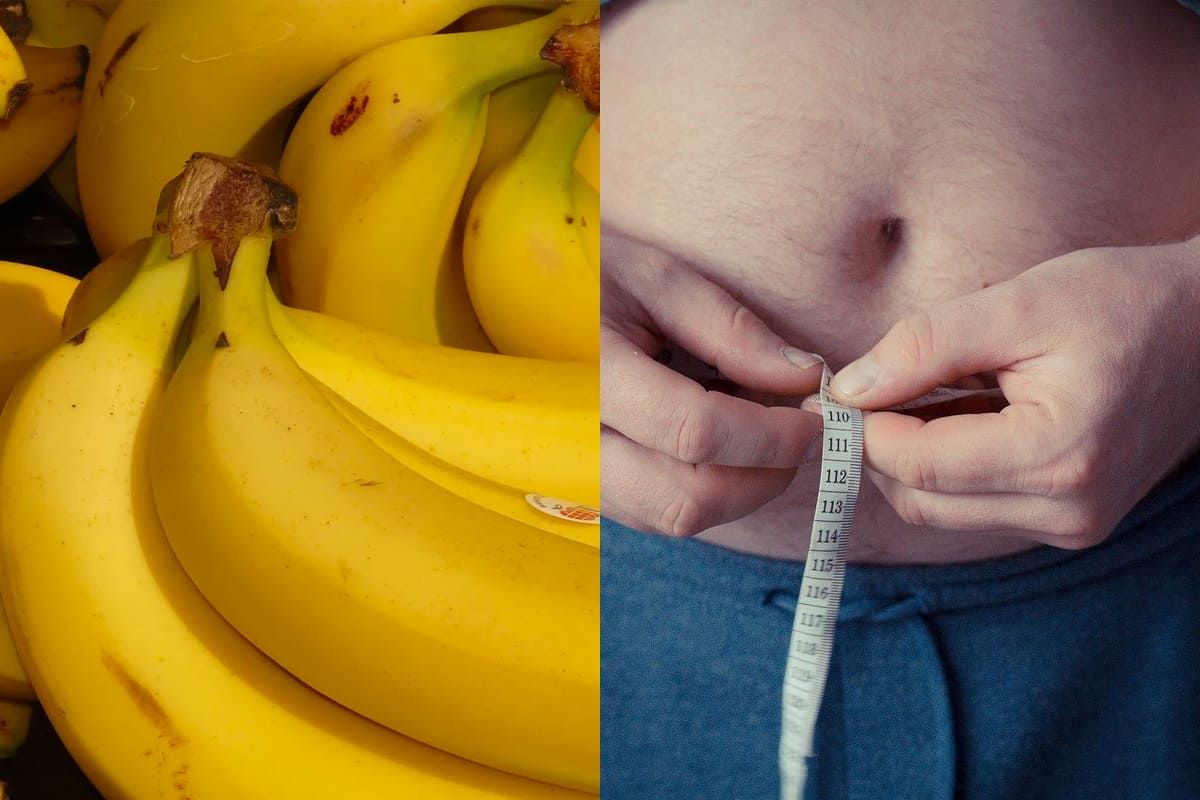 The Raw Til 4 lifestyle is a version of the high-carb vegan diet, which emphasizes eating a whole lot of fruit. But while this unique diet promises boundless energy and a lean physique, unfortunately that outcome isn’t true for everyone. Why is that?

In this post, I’ll explain why Raw Till 4 causes weight gain for so many people. And if you’ve found yourself gaining fat from this diet, I’ll also share a few tips for shedding those excess pounds. But first…

What Is the Raw Till 4 Diet?

The Raw Till 4 diet was originally conceived by Freelee the Banana Girl, a long-time raw vegan and an advocate of a high-carb low-fat (HCLF) vegan diet.

This way of eating—or lifestyle, as Freelee refers to it—places no restrictions on calories.

Even with no calorie limits, the diet promises to help you shed excess pounds. It also promises drastic energy improvements, alleviation of health conditions, and a host of other benefits.

Aside from eating high-carb and low-fat, here’s the main rule: You must eat only raw fruits, vegetables, and greens from the time you wake until 4 p.m.

After that, you’re free to eat cooked vegan foods for the rest of the day.

The lifestyle also encourages eating “monomeals”—meals of only one food. For example, if you have a fruit smoothie for breakfast, you’d ideally just blend up bananas and water, nothing else.

The same idea applies to the cooked vegan foods you eat after 4 p.m. A big plate of baked potatoes might fit the bill.

The foods that tend to be emphasized most on a Raw Till 4 diet are the fruits highest in sugar and calories—dates, bananas, and mangos. And large meals tend to be encouraged, with many people eating 2,500 to 3,000 or more calories per day.

So how does a diet that centers around fruit—some of the most nutritionally dense foods on the planet—cause dramatic weight gain? Let’s take a look.

Science has long supported the notion that, to lose weight, you must burn more calories than you consume. It makes sense, then, how a diet that allows unlimited calories can lead to weight gain.

Because Raw Till 4 promotes eating large meals of sugary fruits for energy, many people end up eating far more calories than they realize. And, because the lifestyle also emphasizes big fruit smoothies, it’s even easier to down 1,000+ calories in a single meal.

What happens when you eat more calories than you burn? You got it: Weight gain.

This is especially true if you don’t move around much throughout the day. Sure, going for a run or bike ride can burn a few hundred calories. But it’s not likely to burn off repeated, huge fruit smoothies.

Excess Carbs Can Be Stored As Body Fat

Raw Till 4 promotes heavy carb consumption and minimal fat intake. This is because the body is more efficient at storing dietary fat as body fat—while it likes to use carbs for energy. (source)

But that doesn’t mean dietary carbs can’t be turned into fat.

Like any macronutrient, excess carbs will be converted to fat for storage. This process of turning carbs into body-fat is scientifically referred to as de novo lipogenesis.

High-carb vegan advocates will emphasize that de novo lipogenesis is a very inefficient process. And that’s true. A lot of the calories get burned off in the conversion process. But in reality, excess carbs still lead to more body-fat.

I explained this more in my post “Do Vegans Need More Calories?” But I’ll give you the takeaway message here.

Even when you eat very “high carb,” like 80% or 90% of calories from carbs… you’re still eating some fat each day. (You need some essential fats, and basically all foods contain some.)

So, even if your body does a poor job at converting carbs to body-fat, it can still just grab the small amounts of fat in your diet and store that immediately.

Because when you’re eating hundreds or thousands of excess calories from carbs… you don’t need to burn your fat calories for energy. So they get stored.

Remember: The human body is intelligent, and its primary goal is survival. Therefore, it always wants to store extra calories for its future energy needs—a.k.a body fat.

Don’t try to trick your body through a “glitch in the Matrix,” shoveling in thousands of extra calories and not expecting it to save any of it for later!

Let’s look at 2 specific, prominent YouTubers who have tried eating unlimited calories from fruit… and ended up gaining significant body-fat from it.

The first case study is High-Carb Hannah. She eventually came out with her own program called Raw Till Whenever. But before that, she was following Freelee and the Raw Till 4 lifestyle. I embedded one of her videos above.

Hannah started her journey being overweight, but she gained a bunch more weight while eating unlimited fruit. She later found that switching to a “McDougall Diet” focused on starches worked much better for her.

More recently, she specifically teaches to focus on lowering the caloric density of your diet by eating half veggies at every meal. It seems to be working, because she is quite lean and fit now.

But for an experiment, he started eating “unlimited fruit” for 75 days. Well, he ended up gaining 15 pounds, including quite a bit of body-fat, which he showed and explained in this video.

What Happens to the Carbs We Eat?

Carbs are the body’s preferred source of energy. When you eat carbs, your body breaks them down into glucose, which it can use immediately for energy.

Carbs that can’t be immediately used are typically turned into glycogen, a form of stored energy. Glycogen then gets stored in your liver and muscle tissue for later use.

But your liver and muscles can only store so much glycogen at once (about 2 pounds worth). This is a healthy way to store carbs in your body—but it’s limited. Once your glycogen stores are full, they’re full.

To make room for more glycogen, you must be physically active. But if you’re largely sedentary or only do light activities, Raw Till 4 weight gain is much more probable. This is because you can’t free up enough room in your glycogen storage before another carb-heavy meal.

So what happens to all those excess carbs that can’t be stored as glycogen? Some get burned off from heating your body or from movements like fidgeting. The rest can potentially be converted to fat through de novo lipogenesis.

How Is It Even Possible to Get Fat From Fruit?

Fruit is a health food—and I’m not disputing that at all. One of the great things about a raw vegan diet is its emphasis on fruits and veggies.

Foods with high water and fiber content, like fruits, are generally more filling than processed foods. And this is why a whole-food vegan diet can lead to lower calorie consumption, even without trying.

And this is part of why a vegan diet often causes weight loss.

But with Raw Till 4, the emphasis on huge meals and smoothies can, unfortunately, lead to weight gain—not weight loss. Especially because smoothies are usually drank quickly, we don’t get the same fullness as we do with whole fruit.

Fruits do contain fiber (which helps slow digestion), but they also contain a ton of natural sugar.

And eating a meal that consists almost entirely of sugar triggers a dramatic insulin response.

This doesn’t mean fruit is “unhealthy.” But it means you have to be careful and have some common sense about the consequences.

Personally, I learned this the hard way.

I struggled with acne for so many years, both before going vegan, and then as a vegan for 10+ years. I tried so many diet changes to see what would help my acne. HCLF veganism did not help!

Want to know what helped the most? Cutting out sugars. Even most fruit. Weird, right? My body can tolerate a cup of berries or something, but beyond that, it’s apparently not a big fan (sadly).

I found that even whole grains and starches like brown rice and sweet potatoes will give me pimples. Based on all the acne science I’ve read by this point, it seems that the insulin response from sugar is what leads to most of my acne, personally.

I wrote a lot more about how I cleared up my vegan acne here. If acne is something you’re struggling with, seriously go read that post, because there’s a lot of stuff I learned the hard way in that post.

But this post is about weight-loss. So let’s get back to that.

How does insulin affect body-fat storage? Well, depending on your body’s energy needs, insulin can either shuttle sugar into your cells for immediate energy… or shuttle it there for storage.

If you don’t need quick energy, insulin tells your cells to convert that sugar into fat for later.

Bottom line? If you’re eating huge sugar bombs all day (and not moving around much), insulin tells your body to convert and store the sugar as fat.

6 Tips for Weight Loss on a Raw Vegan Diet

If you’ve put on weight with Raw Till 4, it may be time to change some things. Personally I switched to incorporate more cooked whole foods, too. And I’ve even found that higher-fat foods like avocado and nuts are very filling and healthy.

But even if you’re staying raw vegan, there are ways to do it in a way that’s more aligned with weight-loss. Here are 6 tips to shed the pounds and get back to a more vibrant state of being: