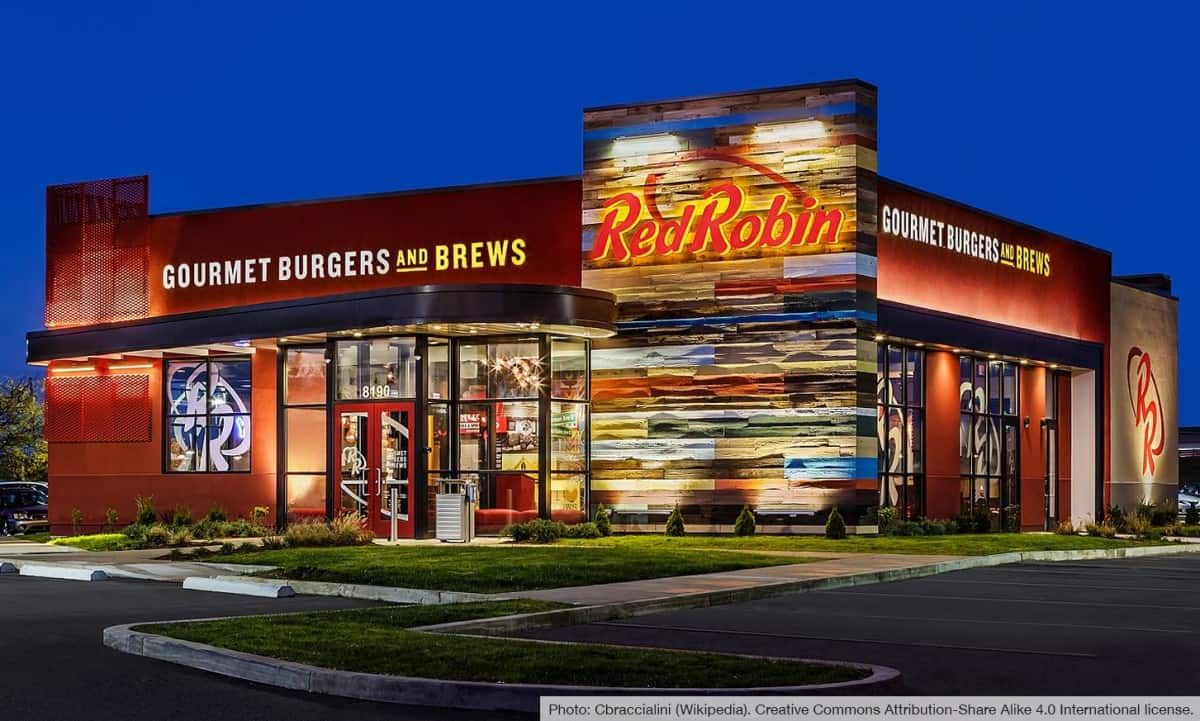 Considering that it’s a burger restaurant, Red Robin isn’t too bad for vegans. Ever since 2019, they offer the Impossible Burger at all their locations. And there are several sides to pair with it, too!

Below, I’ll share my tips on how to order these items vegan. I’ll also share which menu items are surprisingly NOT vegan. I’ll answer some common questions, and I’ll end with a look at the whole-food plant-based (WFPB) options, too—for the health nuts like me!

This vegan menu was made with the help of the Allergen Menu on Red Robin’s website, along with other vegan bloggers and animal rights organizations.

Menu options often change and vary by location. I recommend double-checking anything important with staff at your local Red Robin.

1. Build Your Own Vegan Burger

Red Robin has vegan burgers! In fact, in many locations, you may find two vegan burger patties on the menu:

I wouldn’t be surprised if the Boca Burger was phased out, though. Most people agree the Impossible Burger is the higher-quality and more realistic burger of the two. There’s not much reason to offer both.

If you see a “Garden Burger” patty, that’s actually not vegan, as it contains cheese and other dairy products. Really, just go for the Impossible Burger patty.

That said, don’t just say “Impossible Burger” and expect it to come vegan. Make sure you’re ordering the right bun and toppings to make it fully vegan.

Here are the vegan buns to choose from:

See below for a list of the vegan toppings and sauces, but they have most of the typical ones you would expect. Whatever you normally get on your vegan burgers, they’re likely to have it.

Gotta love a good steak fry. They’re so wide and thick, they feel so much heartier than the wimpy thin fries at most restaurants.

The Steak Fries are in fact vegan, by the way. They’re cooked in vegetable oil, not lard or animal fat. The Vegetarian Resource Group dug into this issue to make sure, and we’re good to go.

Like many restaurants, Red Robin is hesitant to claim that these are 100% vegan. They warn of possible cross-contamination in the frying process. But their explanation actually sounds much more vegan-friendly than most restaurants.

The fries are only possibly contaminated with “splashback” or “vapors” from fryers used in the same kitchen. It’s such a non-issue. I doubt that even 1 vegan in 10,000 would have a complaint about calling these Steak Fries vegan. Go ahead and dig in.

I love when restaurants have multiple fry options. Show me some creativity! I love to see waffle fries, crinkle-cut, shoestring, tater tots, etc. In this case, they go with Sweet Potato Fries! And you simply can’t argue with the results. Delicious.

Note: The same details about possible contamination apply here as for the Steak Fries above.

Note: The same details about possible contamination apply here as for the fries above.

These are just some simple kettle-style potato chips. Not my thing personally, but some people love these as a side for a burger.

Note: The same details about possible contamination apply here as for the fries above.

6. Side Salad (No Cheese or Croutons)

This simple salad comes with mixed greens, cucumber, and tomato. Be sure to order without cheese and croutons.

You can also customize other salads to be vegan… But none of them are very close, so it can get complicated. I’d just ask your waiter for help if you’re looking to do that.

Here are the only two vegan salad dressings I see:

The only ingredient is broccoli florets. It doesn’t get much more vegan than that!

I love eating apple slices. Makes me feel like a kid. I guess that’s why it’s on the kids’ menu! But you can get them as an adult, too!

Simple, and it’snot gonna fill you up—but you gotta love options like carrot sticks to just add some extra veggies on the side.

Add these on your vegan burger or get them with your fries or salad:

Beware of these non-vegan sauces:

These will vary by location and probably include a lot more common soft drinks, too, but here are some of the drinks you can have:

Here are some of the menu items that you would maybe hope would be vegan—but according to the Red Robin website, they’re not:

And here are two more that honestly confuse me, but RR website said they’re not vegan:

Do All Red Robin Locations Have the Impossible Burger?

Yes, all 570 Red Robin locations have the Impossible Burger.

How Much Does a Veggie Burger at Red Robin Cost?

The Impossible Burger patty at Red Robin can be substituted into any burger for an extra $3.50—or you can buy the default Impossible Cheeseburger for around $13 to $15, depending on location. (source)

What Is a Red Robin Wedgie Burger?

The Red Robin Wedgie Burger is a burger with a lettuce wrap instead of a bun made of bread. Wedgie Burgers are not typically vegan, as they contain meat patties and bacon. However, you can order them vegan with the Impossible Burger patty and all vegan toppings.

What if you’re not just vegan, but looking for healthy options at Red Robin, too? What if you want to go all the way to saying no processed foods? Are there any whole-food plant-based (WFPB) options?

Not really a full meal, but it’s something. Believe it or not, some restaurants have far less than that when it comes to whole foods!

You could grab a few of these sides, add an Impossible Burger with one of the more “whole grain” sounding buns, and that’d be a pretty healthy meal by most peoples’ standards.

Here are some of the toppings I’d also estimate to be WFPB (double check by asking staff about any of these if you’re picky):