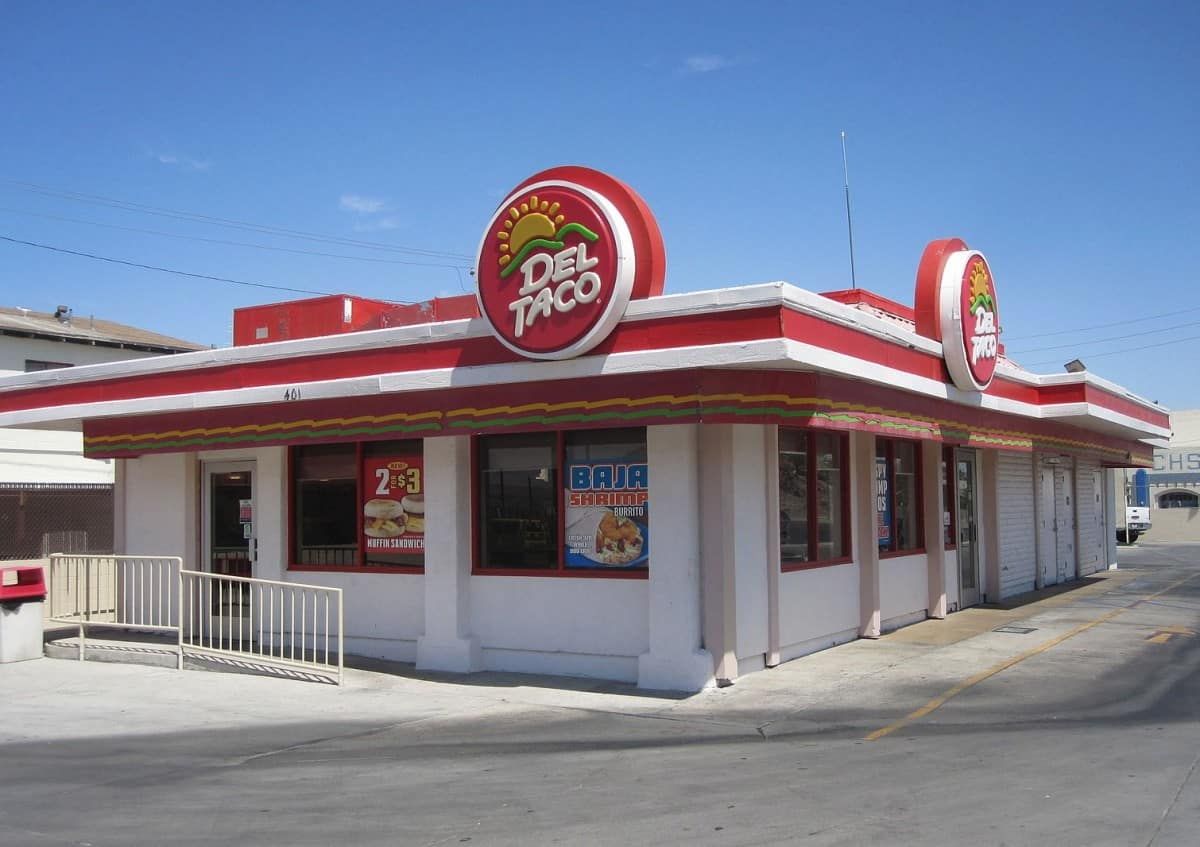 Del Taco is one of the most vegan-friendly fast-food restaurants. They offer Beyond Meat on most of their menu items. But it can still be confusing to tell which items are fully vegan. So I’ll be your guide to figure that all out!

Below, I’ll share how to order these items vegan. I’ll also share some menu items that are surprisingly NOT vegan. I’ll answer common questions, and I’ll end with a look at the whole-food plant-based (WFPB) options, too—for the extra-healthy vegans out there!

This menu was compiled using the ingredients lists on the Del Taco website.

Del Taco does has a page on their website with Vegan and Vegetarian items. However, that list is incomplete. It doesn’t include the newest options and items you can get vegan by custom ordering.

Restaurant menus change frequently and vary by location. So double-check any important information with staff at your local Del Taco.

This is where Del Taco shines. They have massive vegan burritos with actual Beyond Meat. So you can get a high-protein, highly filling meal.

This is Del Taco’s premiere vegan burrito. It comes with cilantro lime rice, Beyond meat, beans, guacamole, and pico de gallo in a flour tortilla.

It’s a big burrito—hence the name “Epic”—coming in at 820 calories and 44g protein. This will fill you up! Customize as you wish, but this is 100% vegan from the start. No need to remove anything.

Here’s another burrito with the option to use Beyond Meat rather than chicken or steak. Make sure you say “Beyond” and they hear that part. Otherwise you could get real meat.

And again, this burrito is massive—930 calories and 44g protein! You’ll be stuffed!

This is a pretty fun burrito because it has french fries in it. That said, it requires a lot of modifications. So you might just be better off asking them to add fries to another burrito.

You need to request no bacon pieces, no cheese, and no sour cream. You also need to substitute the chipotle sauce with one of the vegan sauces below.

Beyond 8-Layer Burrito (No Cheese or Sour Cream)

This 8-Layer Burrito comes vegetarian on the menu. To make it fully vegan, just order without cheese and sour cream.

It’s quite a bit smaller than the “Epic” burritos, weighing in at 550 calories (and probably closer to 400 without the cheese and sour cream).

It comes with seasoned Beyond Meat crumbles, guacamole, beans, tomatoes, lettuce, and red sauce. (Yes, the red sauce is vegan.)

If you don’t want Beyond Meat, you can get the 8-Layer Veggie Burrito (Without Cheese or Sour Cream) instead. It’s the same thing except it has cilantro lime rice in place of the Beyond Meat.

These are the budget burritos. Small and simple. But that also means they’re easy to get vegan: Just ask for no cheese.

You’ll be getting their beans, cilantro lime rice, and their “tangy” green sauce (it’s vegan) in a flour tortilla. Simple.

It’s technically possible to custom order more burritos to be vegan. But it would mostly be pointless, as the above options are much better. But for completeness, I’ll list two more:

If you prefer tacos over burritos, you can swing that as a vegan at Del Taco, too!

This is the main vegan taco option. No modifications needed.

It comes standard with a crunchy taco shell, some seasoned Beyond Meat, avocado, lettuce, and tomatoes. You should be able to get it in a soft shell if you prefer.

By the way, this is the same thing as the normal “Beyond Taco,” too—but it just has avocado instead of cheese, to make it vegan.

There are other ways to order vegan tacos at Del Taco, too. But most of them would get you the same basic thing:

If burritos and tacos aren’t your thing, there are more vegan dishes you can fill up on, too.

This is one of Del Taco’s “Fresca Bowls.” And this one comes completely vegan—no replacements needed. It has their cilantro lime rice, avocado, seasoned black beans, tomato, onion, and romaine and iceberg lettuce.

This is a wavy, crunchy taco shell, with beans, salsa, and lettuce on it. Really fun to eat, and pretty delicious. To make it vegan, just ask to get it without any cheese on top.

This is a pretty cool salad—but it takes some customization to make it vegan. You need to remove the beef, cheese, and sour cream. They should be able to add Beyond Meat crumbles or more beans to replace them.

You’ll be getting sliced avocado, tortilla chips, seasoned black beans, pico de gallo salsa, cilantro, and romaine and iceberg lettuce. Comes with some Salsa Casera (vegan) on the side.

Del Taco has some great vegan sides, too!

French fries are a fast-food staple for vegans. Personally, I’m a fan of the Crinkle-Cut style, too. Very fun. These are cooked in vegetable oil—not animal fat or lard like some restaurants do.

However, they’re likely cooked in the same fryer as animal products. So if that bothers you, maybe ask at your location.

The hash browns are cooked in vegetable oil just like the french fries. So no concerns from a vegan angle, unless you’re worried about a potentially shared fryer.

It’s amazing how many shapes you can get hash browns in. “Sticks” are a rare find, so hats off to Del Taco for this unique snack.

This is a nice, simple side. The chips aren’t made with animal fat, so no worries there. And the guac is 100% vegan, too!

This side is specifically called a “Freshly Made Bean & Cheese Cup,” so they can definitely leave the cheese off, if you ask. This side will just be a cup of beans and red sauce. Simple but good!

You’ve got all these vegan sauces you can potentially add or substitute into dishes:

Their coffee is 30% Rainbow Alliance Certified, which helps ensure sustainable and ethical farming practices. You may think it’s strange or insufficient to commit to this only 30% of the way, rather than 100%. But the Rainbow Alliance website explains this.

In some cases, a company is simply not able to buy 100% certified product to meet their needs in terms of volume. It may be the case that not enough farms are yet certified to meet the volume needed. So that could be the case here.

Since Del Taco has so many vegetarian- and vegan-friendly options, there are a ton of clarification questions to answer.

Here are the full ingredients for Del Taco Churros:

Del Taco Donut Bites are not vegan, as they contain milk and egg ingredients. Specifically, they contain whey, skim milk, and egg whites.

Here are the full ingredients for Del Taco Donut Bites:

Does Del Taco Have Vegan Cheese?

Del Taco does not have vegan cheese currently. However, you can get many of their burritos, tacos, and other dishes made vegan without cheese. You could also add your own vegan cheese at home if you really wanted!

Del Taco Refried Beans are confirmed vegan. They are not made with lard, animal fat, butter, or any other animal ingredients.

There are two possible ingredients lists for their Beans, and it just depends which region you’re in. You’ll be getting one of the following (both are vegan).

Del Taco’s tortillas are confirmed vegan. They do not contain lard, animal fat, or any other animal ingredient.

Here are the full ingredients for Del Taco’s tortillas:

Del Taco Guacamole is confirmed vegan. It only contains avocado, salsa, lime juice, and salsa seasoning. None of those contain any animal ingredients.

Del Taco Chipotle Sauce is not vegan, as it contains buttermilk and egg yolk. Here is the full ingredients list:

Del Taco Secret Sauce is not vegan, as it contains milk and egg ingredients.

Del Taco Sprite Poppers appear to be vegan. I struggled to find a full ingredients list or allergen menu including Sprite Poppers. But there would be no obvious reason for milk, eggs, or other animal products to be included. Plus, the tapioca balls in boba tea are typically vegan.

Does Del Taco Have Vegan Desserts?

Del Taco does not really have vegan desserts. The churros, donut bites, cheesecake bites, and shakes are not vegan.

What if you’re not just vegan, but also trying to eat a healthy, whole-food diet? Can you get a whole-food plant-based (WFPB) meal at Del Taco?

Despite the plethora of vegan options at Del Taco, there are not many strictly WFPB options. Let’s look at why.

First, all the tacos and burritos come in a tortilla (hard or soft) that’s made with processed flours and oils. So those are not really whole foods. You could still make a pretty healthy meal from them—but it won’t be fully WFPB.

Second, Beyond Meat is made from processed oils, too. That said, if you want to replace the Beyond Meat with a whole food, you can ask for beans instead. They look pretty healthy. (I posted the ingredients above.)

You can veganize the Signature Taco Salad, but you’d want to leave out the chips to make it WFPB. You could get the Avocado Veggie Salad—but it comes with white rice, not brown. And you could get the cup of beans as a side, but they contain a small amount of oil.

The guacamole looks to be WFPB. But can you find something WFPB to dip in it?

A lot of the other options are centered on fried potatoes or fried corn (chips, fries, hash browns).