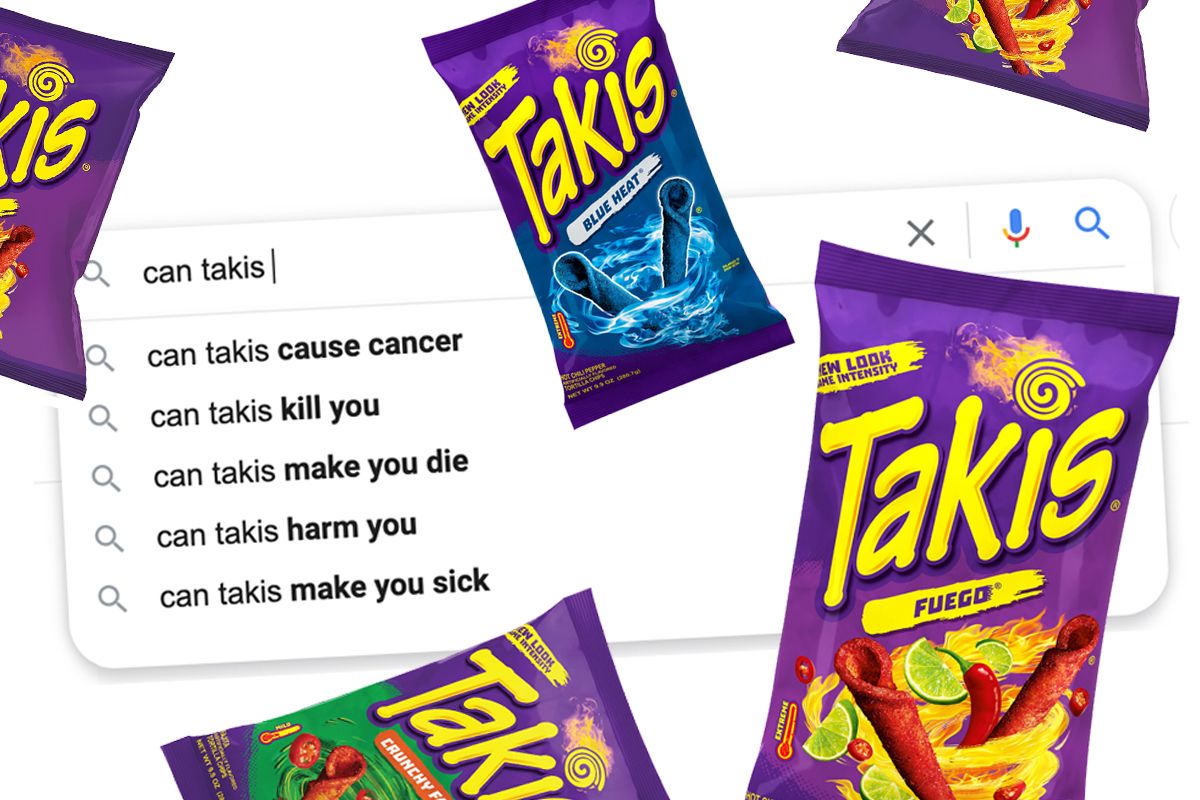 I’ve seen some pretty crazy accusations about Takis online. Social media posts have blamed these hot snacks for causing cancer and ulcers in children, and some school districts have banned them. But today, let’s examine: Are Takis actually that bad?

Takis are not the healthiest snack. They have vegetable oil, sugar, MSG, artificial colors, and the preservative TBHQ. Each serving is high in sodium (420mg), with only 1g of fiber. Some children who eat excessive amounts of Takis have reportedly gone to the hospital for stomach pain and gastritis.

Below, I’ll take a close look at Takis ingredients and nutrition. I’ll compare them to Hot Cheetos, and we’ll explore whether they’re good for weight loss. I’ll also address whether Takis might cause cancer or even burn holes in your stomach.

Are Takis Good for You?

Here are the 11 specific questions we’ll answer about Takis nutrition. Click any of them to skip ahead—or just keep scrolling to read them all:

Let’s start by looking at some actual Takis ingredients. Do they contain anything you should be avoiding?

So, Takis don’t look very good from an ingredients perspective. They have several highly processed and/or artificial ingredients. (For more on Takis ingredient details, see the section below: Are Takis vegan?)

But it’s not just ingredients that matter… The quantity of each ingredient also matters for nutrition. So, next let’s look at the actual amount of carbs, fat, sodium, and other nutrients in Takis.

2. Are Takis High in Carbs?

Takis have 17 grams of carbs per serving, which is pretty high. The carb content of Takis is similar to Hot Cheetos, Cheez-It, and other popular snacks. The main ingredient in Takis is corn flour, which is high in carbs. However, Takis only have 1g of sugar per serving.

Here’s a table showing the sugar and carb content for Takis, compared to Hot Cheetos and other snacks:

Takis are on the lower end in terms of carbs per serving here… But it’s not enough to make a big difference for most people tightly controlling their carb intake. That said, Takis at least avoid the considerable sugar content that Wheat Thins have.

Takis have 8 grams of fat per serving, including 2.5 grams of saturated fat. Takis are baked, not fried. However, Takis still contain processed vegetable oil. They are not a low-fat food.

Many people understand that baking is healthier than frying because less oil can be used. But don’t assume too much. Takis still have 8 grams of total fat per serving, a good portion of which comes from the oil. About half of the calories in Takis come from fat.

4. Are Takis High in Sodium?

Takis have a high amount of sodium, with 420 mg per serving of 12 pieces. That’s almost 70% more sodium than Hot Cheetos, and over double the sodium in Wheat Thins or Triscuits. Currently, a low-sodium flavor of Takis is not available.

Here’s a table showing the sodium content of Takis, compared to other snacks:

As you can see, most of these snacks are pretty similar when it comes to sodium. But Takis are the exception, with much more sodium per serving. Eating too much sodium increases your risk of high blood pressure, heart disease, and stroke.

5. Are the Artificial Colors in Takis Safe?

I’ve made dedicated posts about each of these artificial colors before. But here are some of the specific health concerns people have:

All of these artificial colors are still being tested on animals to determine their safety. The most established problem is hyperactivity in kids. Some governments around the world have taken steps to add warnings or ban some of these dyes.

It’s actually hard to find good credible sources on which of these dyes are actually banned in which countries. There seems to be misinformation online about this. I found the most credible references to Yellow 6 being banned in Japan and several European countries.

[See more below: Do Takis Cause Cancer?]

6. Are Takis Good for Weight Loss?

Takis are not the best food for weight loss, as they contain multiple highly processed ingredients like vegetable oil and sugar. The high sodium content of Takis also makes them tempting to over-eat. However, Takis can potentially be eaten in moderation on a weight loss diet.

One of the foods with the highest calorie density is vegetable oil. Refined sugars and flours have high calorie density, too. Takis have several such processed ingredients, so there is a risk of overeating them.

Another thing to consider is that Takis only have 1g of fiber per serving. Other snacks can help fill you up with more fiber and keep you better satisfied on a weight-loss diet.

So, can Takis make you fat? Yes, they can potentially contribute to weight gain. But by itself, a few servings of Takis will not ruin your weight loss diet, either. Weight loss depends on your overall diet and lifestyle.

If you’re burning more calories than you’re eating each day/week, you should lose weight. Eating Takis or other “processed foods” on occasion will not automatically ruin your diet, as long as the overall calorie deficit remains in tact.

Takis are considered processed food, as they contain vegetable oil, sugar, MSG, artificial colors, and only 1 gram of fiber per serving.

It’s widely understood today that healthy food tends to be minimally processed. When we eat food in its more natural forms, we get more nutrients and fiber than if it’s been processed into flours, flakes, syrups, or oils.

In practical terms, the easiest way to spot “processed food” is to check the ingredients list for refined oils, sugars, flours, artificial ingredients (sweeteners, colors, additives), or lots of salt. And indeed, Takis have several of these ingredients.

It may be debate-able whether Takis count as “junk food” or “ultra processed,” but they are clearly processed food, at least.

8. Do Takis Cause Cancer?

Takis are not known to cause cancer. That said, the artificial colors used in Takis have been associated with some cancer-related concerns.

To start with, let’s discuss Red 40, which is used in some Takis flavors. So far, studies have not shown any cancer-causing effect from Red 40—but unfortunately, that’s not the full story.

Red 40 has been shown to contain small amounts of benzidene, which is a known carcinogen. It is legally allowed because the amount is so small, there is no presumed negative effect. (source)

However, some people still worry about the benzidene in Red 40. It was noted in one scientific journal that the FDA only checks for free contaminants—but there’s more bound benzidene in Red 40 that may get released in the presence of intestinal enzymes. (source)

So, there is not strong evidence that Red 40 causes cancer—but it’s hard to know the long-term effects for sure. Now let’s look at two other colors found in Takis products.

There are also some animal trials where Yellow 6 resulted in the formation of kidney/adrenal tumors—but this is disputed by the industry and by the FDA itself. (source, source)

And lastly, Blue 1, which is found in Takis Blue Heat—there is only weak evidence pointing to cancer-related concerns. An unpublished study on Blue 1 suggested it may cause tumors in mice. So, more research may be warranted there.

Overall, there is not strong evidence that Takis cause cancer. Theoretically, some Takis ingredients may increase cancer risk—but the same could be said of many, many processed foods.

9. Do Takis Burn Holes in Your Stomach?

Takis can cause stomach pain, irritation, and gastritis for some people—particularly for children who eat excessive amounts. However, there is no solid evidence of Takis causing ulcers or actually burning holes in anyone’s stomach.

Some claims about the health risks of Takis may be overblown on social media—don’t believe everything you read. However, there are some real risks, especially for children who eat Takis in large quantities.

Several E.R. physicians and pediatricians have been quoted saying they regularly get children coming in with stomach pain from eating Takis and other hot snacks. One physician mentioned seeing frequent cases of “ulcer-related stuff” caused by the hot snacks.

One child’s hospital visit caused a media stir after the girl had to get her gallbladder removed. But it should be mentioned—gallbladder issues are not generally associated with consuming certain foods.

10. Which Is Healthier, Takis or Hot Cheetos?

Takis have more saturated fat, more sodium, and more sugar per serving compared to Hot Cheetos. Therefore, Takis seem to be a bit worse than Hot Cheetos from a health perspective. However, neither snack is very healthy, as they are both highly processed.

Most health authorities recommend limiting saturated fat—so it’s not great that Takis have about 67% more saturated fat than Hot Cheetos.

But the biggest nutritional difference between Takis and Hot Cheetos is the sodium content. Takis have much more sodium than Hot Cheetos. (See more about sodium above.)

So, are Takis worse than Hot Cheetos? Probably. But in any case, the nutritional profile is pretty similar between these two snacks. And neither one is very healthy.

Note: There are different flavors and varieties of both Takis and Hot Cheetos. So, please take that into consideration to make your final decision.

Takis Fuego, Blue Heat, and Nitro are vegan. Takis Guacamole and Crunchy Fajitas are not vegan. Below is the full breakdown of which Takis flavors are vegan and why:

For more about Takis ingredients, see the above section, “What Are Takis Made Of?“