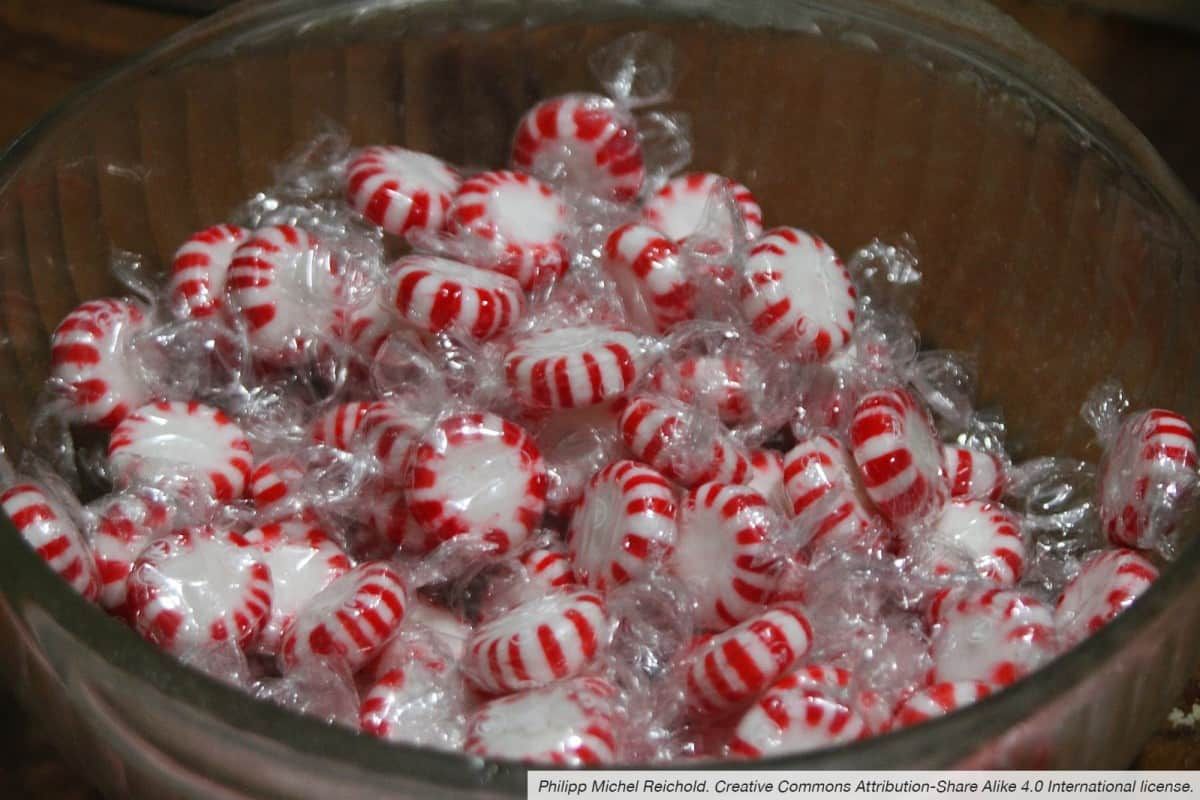 Mints are the kind of thing that should always be vegan. The minty flavor itself comes from plants like peppermint and spearmint. But as with many other products, it’s possible for milk, egg, gelatin, beeswax, and other crazy insect ingredients to get in the recipe.

Out of 35 brands of mints analyzed, 25 brands were vegan, 5 were not vegan, and 5 varied by product. Peppermints and mint imperials (Scotch mints) were found to be consistently vegan. Meanwhile, Junior Mints, Andes Mints, and most Altoids are not vegan.

Most mints are vegetarian and vegan, as they do not contain obvious animal ingredients. However, there are some non-vegan mints which contain gelatin, carmine, beeswax, shellac (confectioner’s glaze), egg, or milk ingredients.

Below, I’ll lay out which common kinds of mints and mint brands are vegan and vegetarian. But first, let’s look at what mints actually are made of.

What Are Mints Made Of?

Mints are typically made “minty” by some kind of mint oil, such as peppermint oil, spearmint oil, or wintergreen. This applies to all different kinds of mints, even including chocolate mints.

The other ingredients in mints often include sugar, other sweeteners like dextrose or sucralose, and artificial colors (like Blue 1).

Magnesium stearate is also a common ingredient in many mints—and a controversial one for picky vegans, as it can be animal- or plant-derived (and you don’t know just from reading the label).

Which Brands of Mints Are Vegan?

Alright, now let’s take a look at some of the specific popular brands of mints. This will give you a bird’s-eye view of which mints tend to be vegan, and which brands to look at more closely.

Which Kinds of Mints Are Vegan?

Alright, now let’s look at some overall common types of mints and whether they tend to be vegan or not.

Below, I surveyed several popular brands of peppermints. I found that none of them had any clear animal ingredients. They just contain ingredients like sugar and Red 40, which only the pickiest vegans would avoid:

Mint Imperials (a.k.a. Scotch Mints) are typically vegan. These mints are popular in Great Britain and are commonly used as after-dinner mints there.

I surveyed six popular brands and found no animal ingredients in any of them:

In addition, I can confirm that I’ve checked some similar products in the store before—and I’ve easily found other brands of Thin Mint alternatives that are also vegan.

That said, beware of Keebler’s cookie in the same style as Thin Mints. These “Fudge Shoppe Grasshopper” mint cookies are not vegan, as they contain whey (a milk ingredient). (source)