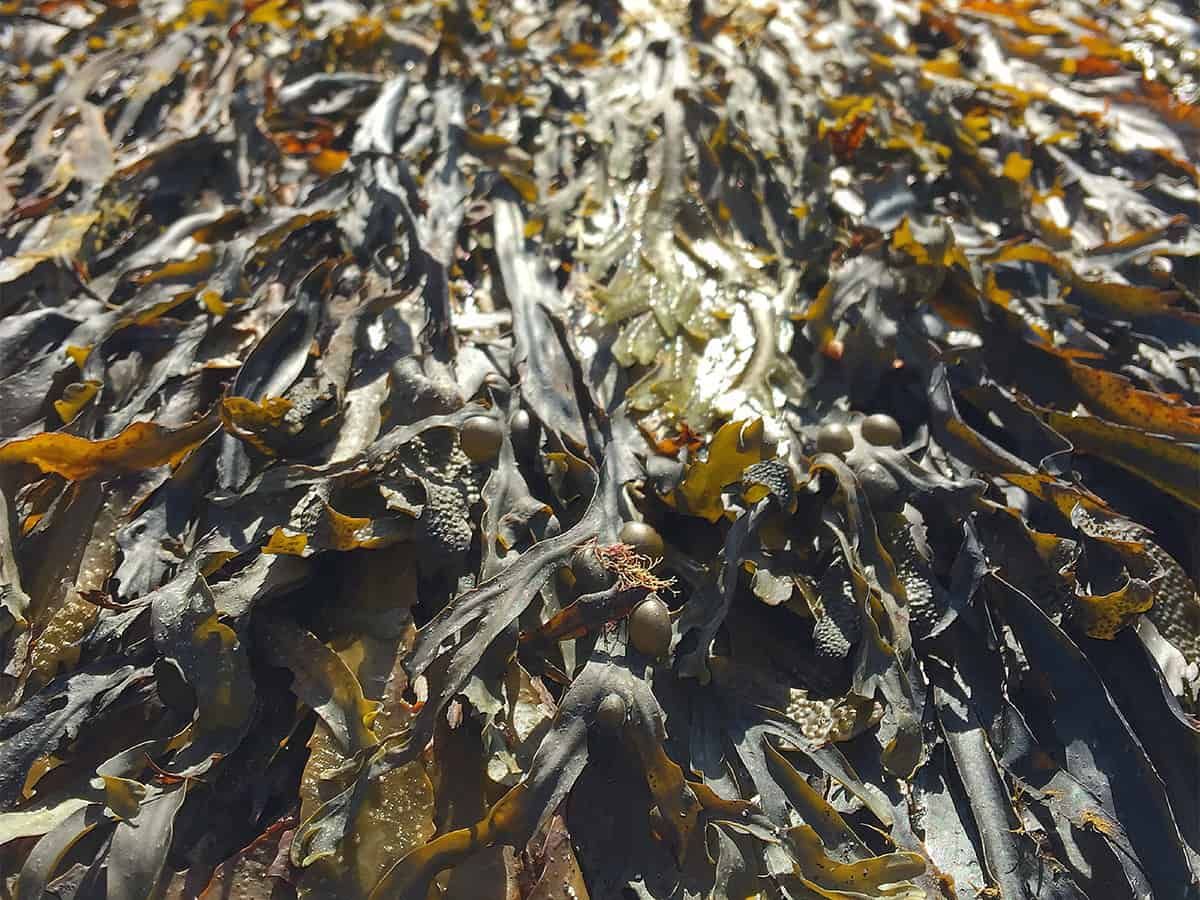 I love going to sushi restaurants. But when I first went vegan 14 years ago, I remember having a lot of questions. And one curiosity I had was about seaweed—probably because anything in the sea seems a little mysterious.

So, is seaweed vegan? Seaweed is vegan, as it’s simply a category of sea vegetables. There are no animal by-products involved in seaweed production. Seaweed also tends to be beneficial for vegans due to the iodine and other nutrient levels.

Below I’ll cover more about each type of seaweed, including the three types of seaweed you should NOT eat due to safety reasons stemming from excess iodine and excess arsenic.

Seaweed can be intimidating for some people. I have memories from childhood of seaweed being this gross gooey green stuff that would touch my feet at the beach. Yuck.

But seaweed actually comes in many types. Each one has a distinct color, taste, and texture that contribute differently to a variety of dishes.

Nori seaweed is vegan. And not only that—it also has remarkably high amounts of vitamin A, vitamin C, and vitamin B12. This makes it a great dietary addition for vegans, as some vegans do lack sufficient vitamin A and B12 in their diets.

So, enjoy your nori sheets and don’t feel any guilt!

Is the Seaweed in Sushi Vegan?

The seaweed in sushi is vegan. It is typically nori seaweed, which has no animal ingredients and no contact with animals in its production process.

Spirulina is vegan. This is a protein-rich green algae, rich in vitamin B12, which makes it a great addition for vegans. You’ll typically find it in powder form.

Spirulina is also rich in iron and vitamin A. Hence, its sometimes used to treat malnutrition and anemia.

You can take Spirulina in powder or tablet form to keep your brain, heart, digestive system, lungs, and liver in good health. It’s also easy to toss some into your green smoothie or acai bowl.

Wakame is vegan. Known for its use in miso soup, this dark blue, almost black seaweed is rich in the essential bodily nutrients like magnesium, iron, calcium, and zinc.

Aside from its use in miso soup, you can add it to a savory dish or as flakes over a salad to add a sweet taste and a silky smooth texture.

Dulse is vegan. This is a greenish, slightly purple seaweed that contains higher iron levels than 100 grams of sirloin steak, in just 8 grams!

It can be added to salads, dressing, smoothies, and soups to give a light salty taste. It can bring the taste of the sea to any dish!

Dulse is arguably the best seaweed to add to your diet specifically when it comes to supplementing your iodine intake. About a tablespoon of dulse each day provides an ideal amount of iodine.

Hijiki is vegan. However, it is not recommended, and it is actually banned in several countries, due to excessive arsenic levels.

Hijiki is said to have 14 times the amount of calcium found in milk and is rich in fiber, so that makes it sound pretty good, but some food safety agencies would definitely advise against consuming it.

If you wish to eat hijiki, you’ll most likely need to soak it, as it has a rough texture.

Kelp is vegan. However, it is not recommended due to excessive levels of iodine. Iodine is beneficial to the thyroid in the right amounts, but kelp has caused some people to develop iodine toxicity.

If you’ve ever had “zero-calorie noodles,” this is another name for kelp noodles. Kelp is known to help keep you full for a longer time than whole-wheat noodles. Thus, it can lead to improved weight control.

But again, I wouldn’t recommend it for the iodine reasons mentioned above. See below for more info on iodine toxicity.

Kombu is vegan. Kombu is simply a form of kelp. However, it is not recommended due to excessive iodine levels.

This brown seaweed has a salty taste that makes it a popular addition to soups and vegan bean dishes. It contains a pigment called fucoxanthin, which supposedly enhances fat metabolization and aids in weight loss.

But again, I wouldn’t recommend it due to the excess iodine. See below for more info on that.

Carrageen is vegan. Also known as Irish Moss, this seaweed has a neutral taste, and its subtle flowery aroma makes it a common choice for addition to sauces and gravy.

You may have heard of carrageenan—this is a product of carrageen. There is some controversy around the safety of carrageenan, however. So do be informed about that if you plan to consume it.

Agar-agar is vegan. It is mostly used in baking because it has thickening properties. It contributes to good health as it’s rich in fiber and iodine.

Agar-agar is light, almost white in color, and it’s sold in solid or flake form.

Seaweed salad is generally vegan. I looked at several of the most popular seaweed salad recipes online, including this one and this one, and all of them were vegan. But it still depends on the specific ingredients added.

What about adding sugar to your seaweed salad? Some people argue that refined sugar is not vegan, due to some sugar brands being filtered with animal bone char (source).

But most vegans are still okay with sugar. Personally, I don’t worry about it. That’s because it’s hard to track whether the sugar in a product is vegan or not, and it doesn’t strike me as a major animal ingredient anyway. But it’s up to you.

Arguably the healthiest food group is dark leafy green vegetables—and what is seaweed but the dark green leafy vegetables of the sea?

There are tons of health reasons to eat seaweed:

Minerals: Seaweed provides the body with plentiful amounts of minerals like magnesium, zinc, vitamin B12, and iron.

Iodine: These chlorophyll-containing plants absorb iodine from the ocean, where they grow. This, in turn, can provide you with your required daily intake of iodine. However, see the video below to learn which types of seaweed may contain too much iodine for optimal health.

Antioxidants: Seaweed is also rich in antioxidants, such as vitamins A, C and E, carotenoids, and flavonoids, which prevent cell damage and diseases, such as cancer.

Fiber: Fiber makes up about 25-75% of seaweed’s dry weight, and it’s associated with gut health and preventing gut issues like constipation or diarrhea. It also helps regulate blood glucose and insulin levels by reducing sugar cravings.

Although seaweed can be a very healthy addition to your diet, it’s also entirely possible to get too much. And some varieties should be avoided altogether.

Does Seaweed Have Too Much Iodine?

As seaweed is rich in iodine, too much of it over a prolonged period of time can negatively affect the functions of the thyroid gland and may lead to thyroid dysfunction.

If you notice sudden weight gain, swelling or tightness around the neck, you should cease seaweed consumption and consult your doctor immediately.

I recommend avoiding kelp and kombu all together, which may be dangerously high in iodine. Watch the video below for more on that.

Heavy metals like arsenic, aluminum, cadmium, and lead can be absorbed by seaweed if they’re present in the water in which it’s grown.

Although studies showed that this a very unlikely risk in general, as these toxic metals are usually found in very low levels, it’s still better to be safe than sorry. Make sure your seaweed is organic and is of high quality.

Specifically, I don’t recommend eating hijiki seaweed due to the arsenic contamination. As explained in this video, many governments have restricted or banned hijiki for this reason, including Canada, England, and China.

Now that you know, as a vegan, that seaweed is okay to eat and that it’s a nutritious ingredient to add your diet, don’t hesitate to hit the nearest retail store and shop for the type that appeals to you most!

Be sure, however, to balance your intake to avoid the risks of excessive eating of seaweed. And again, I don’t recommend kelp, kombu, or hijiki for safety reasons addressed above.