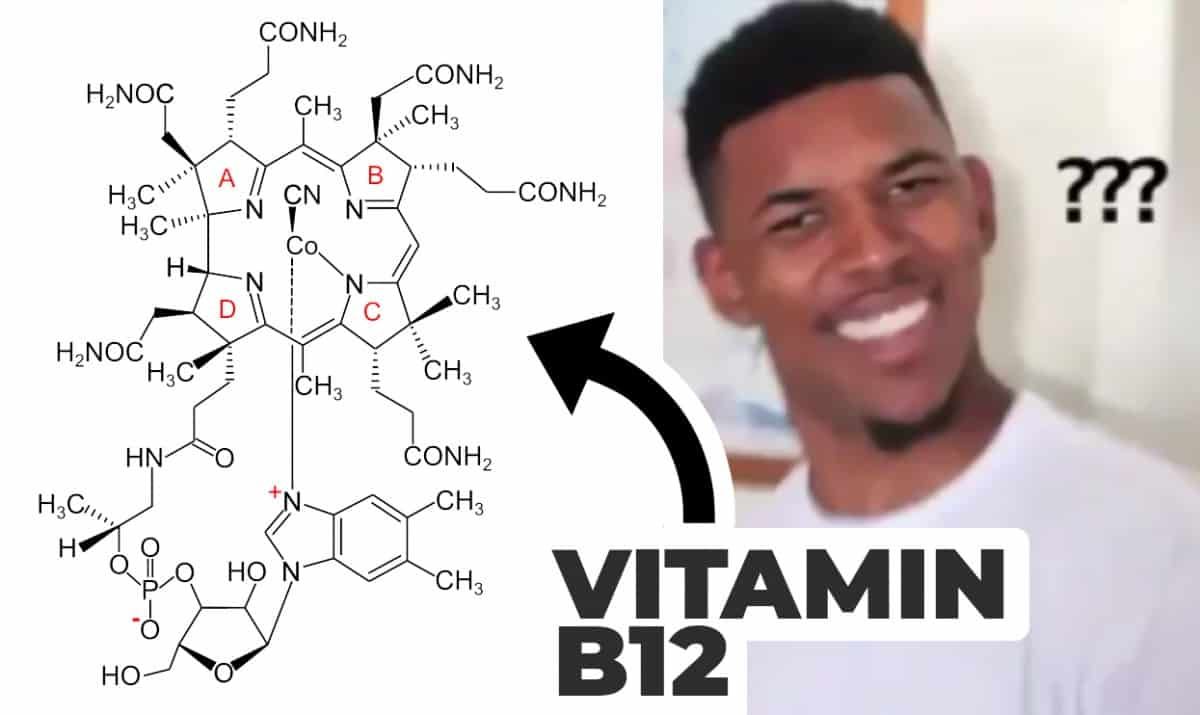 Okay, let’s do some myth busting: Vitamin B12 isn’t made by animals. It’s actually created by bacteria and their close microscopic cousin, archaea. But if bacteria make B12, why are animal foods the most well-known source? And what goes into B12 supplements anyway?

B12 supplements are made by allowing bacterial cultures to ferment and naturally produce vitamin B12. This is then harvested and sent off to be added to vitamins or other supplements.

Thanks to a quirk in our evolution, humans are one of the rare mammals that can’t produce enough B12 internally. But understanding how we got to this point, and why vegans need B12 supplements, requires a quick trip down our evolutionary memory lane.

How Did We Get B12 Before Vitamins?

Answering this question all depends on how far back in human history you want to go.

Many herbivores create their own B12 in their digestive tract. How? Well, the same bacteria that we ferment to create supplements actually produces B12 inside the animal naturally.

This either happens in the intestine, or in secondary stomachs, as in the case of animals like cows.

Humans actually produce enough B12 to satisfy our own nutritional needs… but this process happens in our colon. And that’s a problem for us.

Let’s just say, this internally-made B12 starts too far down in our system and leaves our bodies before our intestines can make any nutritional use of it.

This leaves humans in the awkward position of needing external sources of B12. Without a steady supply of B12, we can start to suffer from some serious medical conditions.

How Ancestral Humans Got Vitamin B12

When humans first started relying on external sources of B12, it likely came from scavenging animal remains.

There has been a lot of debate in the last 70 years about the culinary history of our species. I covered some of it in my big blog post on whether humans are omnivores, herbivores, or frugivores.

But suffice it to say, the old idea that cavemen hunted and cavewomen gathered has largely been overshadowed by the theory that early humans scavenged for most of their food.

Are B12 Supplements Vegan?

Vitamin B12 supplements are typically vegan. The vitamin B12 itself is almost always vegan, as it is derived from bacteria rather than animals. However, some B12 supplements contain inactive animal ingredients like gelatin or shellac, making them not vegan.

Especially in the case of multivitamins, the supplement can contain various animal products.

Personally, I recommend the Future Kind Essential Multivitamin as a daily vegan B12 source. Here’s my full review of it.

Make sure to check the label to see if any other parts of your supplements are made from animal products.

But at least you can rest assured that the B12 itself is vegan.

What we refer to as vitamin B12 is actually known by scientists as “Cobalamin.”

B12 is actually a group of nearly identical chemical forms that all feature one atom of cobalt. You’ll typically see methylcobalamin or cyanocobalamin in B12 supplements.

Really, B12 is one of the rare occurrences of cobalt being used in biochemistry. While it’s rare to see cobalt used in the body, B12 is used by every cell for metabolism.

The story of how B12 gets made today starts with scientists in a lab.

In 1972, Robert Burns Woodward of Harvard University and Albert Eschenmoser from ETH Zurich gathered up a team of 91 researchers from 19 different countries and, over the course of 12 years, synthesized B12 in the lab.

The achievement of these scientists has been influential. Their work fundamentally changed how we look at a field of chemistry known as total synthesis.

The only place in the world B12 is actually made is inside bacteria and some archaea.

With that said, their work in the lab had no practical application for popular nutrition. That’s because the amount of B12 they created over the 12-year period was negligible.

For Woodward and Eschenmoser, it was about the journey, not the destination.

Biosynthesis might sound technical, but this is the nuts and bolts of how B12 is created by bacteria.

We’re talking about actual, usable amounts of B12 now.

The only place B12 is actually made is inside bacteria and archaea. These microscopic organisms are in charge of creating the most structurally complex vitamin out there.

The process is long. It involves over a dozen different chemical reactions, between two possible pathways to the same end result.

It’s no wonder it took a team of the world’s best scientists 12 years to put the puzzle together.

The vitamin B12 that makes it into your supplements and fortified foods all comes from industrial production.

This process involves fermenting different bacteria. The bacteria Pseudomonas denitrificans, Propionibacterium shermanii, and Sinorhizobium meliloti are all used by different labs to make B12.

Some companies rely on genetically engineered bacteria that produce much higher yields of B12. Others rely on the unmodified bacteria mentioned above. Bacteria that make high amounts of B12 and little to no harmful byproducts are the ideal.

In a sense, B12 is naturally fermented and grown much like other fermented foods.

After being fermented, the B12 is harvested and shipped off to be added to supplements and fortified foods.

How Can I Get Vitamin B12 Naturally?

Before we talk about natural sources of B12, we need to talk about dirt.

There’s a common belief that since soil can be rich in the bacteria that creates B12, eating dirt-covered veggies straight from the garden can supply B12. This isn’t as true as it appears.

While B12 may occur naturally in soil, it’s often in too low of concentrations to give us the amount we need. Our bodies are also not well-equipped to digest soil. (Unlike elephants and bats which can, and do, freely snack on tasty dirt.)

When we eat the bacteria that create B12 as humans, the bacteria just set up shop in the wrong part of our digestive tract. Unlike other animals, our bodies can’t create adequate B12 internally, even if we try.

Thankfully, there are better ways to get B12 than snacking on soil. One of the biggest advances of modern nutrition has been our ability to fortify foods with vitamins.

How Do Vegans Get B12 Without Supplements?

B12 is added to a wide range of vegan foods. This includes products aimed at vegans—like nutritional yeast, plant-based milks, and other packaged vegan foods.

Other foods like cereal, some breads, and certain brands of yoghurt are also fortified with B12.

Fortified foods are one of the best ways for vegans to get the B12 we need.

Whole Foods That Contain Vitamin B12

If you’re looking for a whole foods way to get B12 as a vegan, there are some challenges. As with animals, plants only have B12 if they partner up with bacteria that naturally make it.

This means plant-based sources of B12 are much less consistent when in their whole foods form. But there are some options:

However, these whole foods sources often have unpredictable B12 concentrations. So they would need to be eaten in significant quantities.

At the end of the day, fermentation of bacteria is the only natural way to get B12—whether that’s in supplements, fortified foods, or seaweed. For vegans and others at risk of deficiency, I personally recommend taking a B12 supplement each morning.