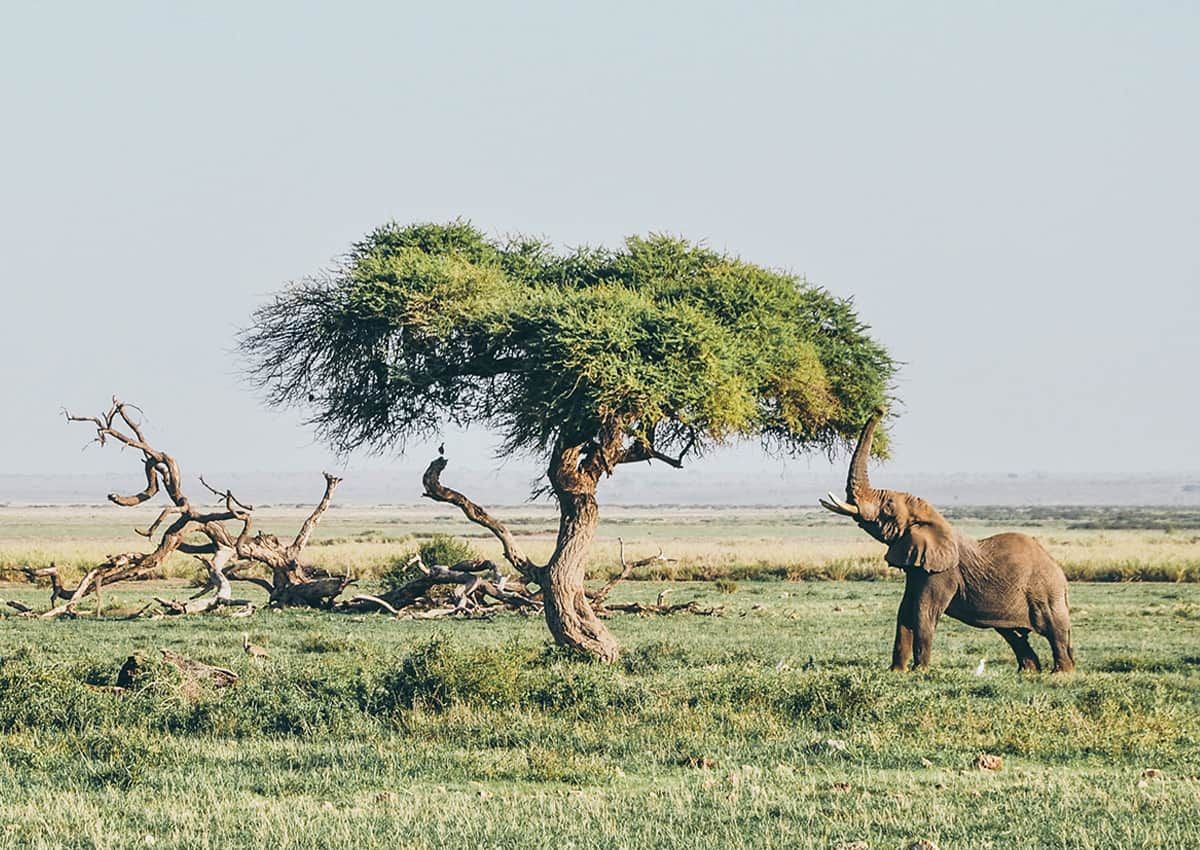 To combat the idea that vegans are small and weak, many of us like to cite the fact that elephants, gorillas, and other big animals eat vegan diets, too. But in my 14 years of being vegan, I’ve actually heard some debate around this issue.

So, are elephants vegan? Elephants do not eat meat. Technically, “herbivore” is a more accurate term to describe elephants than “vegan” or “vegetarian,” since their plant-based diet is a matter of biology rather than choice. However, for casual purposes, yes, it can be said that elephants are vegan.

Below, I’ll dive into what exactly elephants eat, I’ll share some rare footage of elephants eating meat in the wild, and I’ll also clarify this issue of “herbivore” vs “vegan” once and for all!

What Do Elephants Eat?

The exact diet of elephants varies depending on the type of elephant and their exact habitat. African Elephants are taller and sometimes live among trees that they’ll pull food from. Asian elephants are shorter and tend to focus more on grass. (source)

When elephants are kept in captivity (for zoos, circuses, etc), they are mainly fed hay. Sometimes they’re also fed other plant foods like fruit, cabbage, carrots, or even sugar cane. (source)

Do Elephants Eat Meat? Ever?

Elephants do not usually eat meat. They are known to be rather strict herbivores. However, it is not completely unheard of for an elephant to eat meat.

For example, nature photographer Matt Brierley has captured the rare footage (right) of two elephants eating weaver bird nests in Kenya. It seems that some of these nests contained baby chicks and eggs.

It’s unclear how “accidental” this consumption of chicks and eggs was, or how common this sort of thing is. But it is not believed to be very common.

Similarly, I found this video of an elephant eating fish out of the water. So yes, it does happen that elephants have eaten meat—but these examples are so noteworthy precisely because it is not common at all.

Herbivore vs Vegan: Is There a Difference?

The fact is that the term “herbivore” has a few different definitions. If you look in a typical dictionary like Merriam-Webster, it’ll say something like “an animal that feeds on plants.” By that definition, yes, a vegan human could qualify as an herbivore! We are animals who feed on plants.

But if you look in an encyclopedia or science textbook, it will likely emphasize that herbivores are animals that are physiologically and anatomically adapted to a plant-based diet.

By that definition, a vegan human would arguably not count as an herbivore. By that definition, vegans would still be categorized in the same way as any other humans—probably as omnivores—because our anatomical adaptations are not any different! We’ve just chosen to eat differently.

Side note: It’s actually a common subject of debate in vegan circles whether human beings really should be classified as herbivores, though. After all, humans seem to thrive on more plant-focused diets.

But the common scientific understanding is still that human beings are omnivores: We are physiologically and anatomically capable of eating plants and/or meat for the bulk of our diets.

So Are Elephants “Vegan”?

But other definitions of “vegan” are more philosophical, and it probably wouldn’t make sense to apply them to nonhuman animals.

Some definitions of “vegan,” for example, emphasize that it’s a “movement against the exploitation of animals.” Or it’s posed as being about nonviolence, anti-speciesism, or cruelty to animals.

It’d be hard to argue that elephants hold any of these ideological positions. Elephants aren’t omnivores who are choosing to be plant-based. They’re just plant-based by default.

If you want to refer to elephants as vegan for fun, I think that’s harmless… And it also does make sense based on the more casual/simple definitions of “vegan.” I mean, it’s true that elephants eat a plant-based diet!

But it’s also missing some of the nuances of how veganism is actually different from just being herbivorous. Veganism is really about omnivores choosing to eat like herbivores for specific reasons.

And the same could be said of applying the term “vegetarian” to elephants. It works for casual purposes. But it’s not the most accurate term. “Herbivore” is most appropriate.

Elephants eat plant-based, herbivorous diets. There are only rare exceptions found in nature when elephants have eaten meat. Therefore, for casual purposes, yes, elephants are vegan. (You could also say that elephants are vegetarian. “Vegan” is just a more specific kind of vegetarian.)

However, if you want to get technical about it, elephants may not fully qualify as vegans because they’re not choosing their plant-based diet like us human vegans are. Elephants are just plant-based creatures by default!