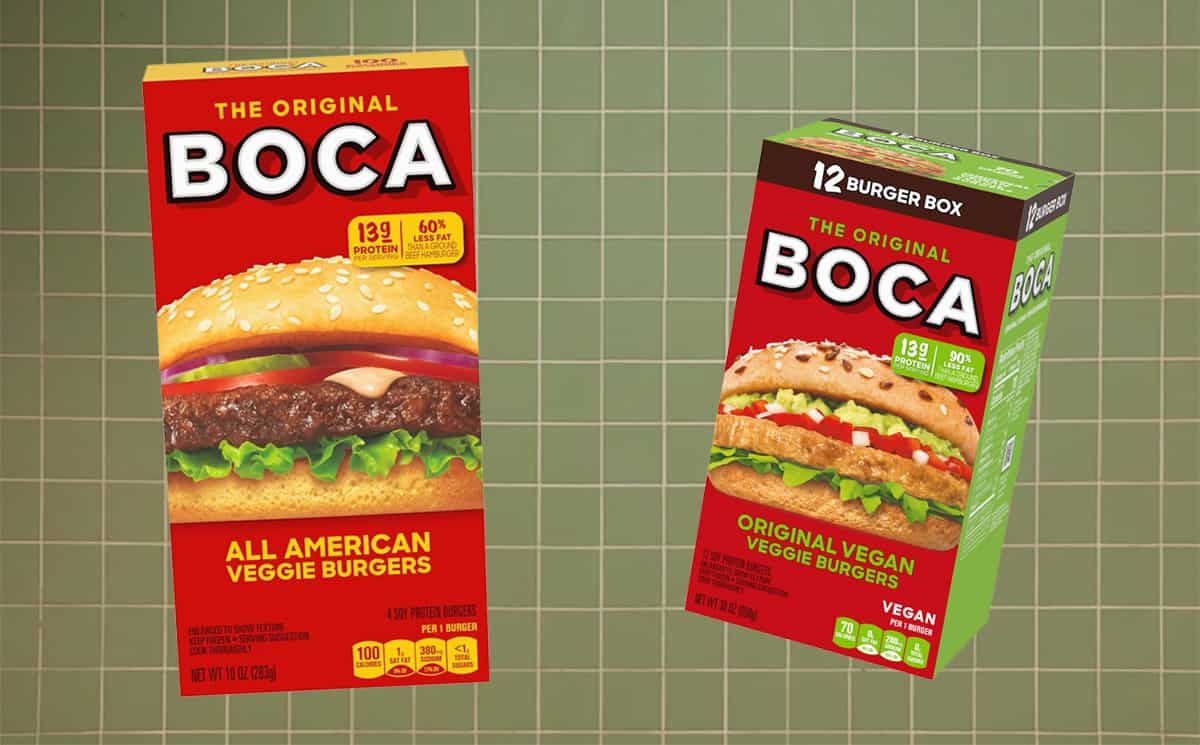 Nowadays, there are hundreds of veggie burgers on the market to choose from. But one of the most popular choices remains the classic Boca Burger. They’re advertised as a healthy alternative to real hamburgers. But are they actually good for you?

Boca Burgers are low in calories, saturated fat, and cholesterol, while being high in plant protein. However, they are a processed food, containing soy protein concentrate, corn oil, caramel color, and quite a bit salt. This makes them only moderately healthy, not completely.

What Is a Boca Burger Made Of?

First, let’s look at the actual ingredients of Boca Burgers. There are several kinds of “Boca Burgers,” however.

Here are the ingredients for the original Boca Burger—the All American Veggie Burger—which is vegetarian but not vegan:

And here are the ingredients for the Original Vegan Burger:

Below, I’ll dig into some potential problems with a few of these ingredients, such as caramel color. But for now, let’s clarify some more aspects of the ingredients.

Do Boca Burgers Have MSG?

Boca Burgers do not list MSG (monosodium glutamate) in their ingredients. However, MSG is typically present in Boca Burgers, as MSG naturally occurs in hydrolyzed soy protein and soy protein concentrate.

That said, as I wrote in my post all about MSG, this compound is likely not as unhealthy as a lot of people think. So even if Boca Burgers do have MSG, I personally don’t consider that a big red flag by itself.

Do Boca Burgers Have Cholesterol?

Boca All American Veggie Burgers contain approximately 5 mg of cholesterol each. Boca Original Vegan Burgers do not contain any cholesterol.

Remember that dietary cholesterol is only found in animal products (source). Therefore, if you stick to the vegan Boca products, they will all be free of cholesterol.

That said, the amount of cholesterol in non-vegan Boca Burgers is quite low anyway. Five milligrams is only 2% of the daily value for cholesterol. (source)

Boca Burgers contain soy in the form of soy protein concentrate. This is a processed form of soy made from defatted soybeans. The All American patties also contain hydrolyzed soy protein.

Let’s take a look at Boca Burgers from a calories and protein perspective. I know those are two key numbers I’m looking at when trying to lose weight or build muscle.

So, how many calories are there in a Boca Burger? Boca All American Veggie Burgers contain 100 calories each. However, Boca Original Vegan Burgers only contain 70 calories each.

Both of these calorie counts are quite low for a burger patty. If you look at Beyond Burger patties, they contain 270 calories each—about three times as much!

That said, Boca burger patties are thinner and less filling than Beyond Burgers. So you might not really feel as “full” from just one Boca Burger.

However, when you take the smaller size of Boca patties into consideration, Boca Burgers are actually very high in protein.

For each 100 calories, Boca Burgers have considerably more protein than most other mock meats. Here’s a list of how much protein can be found in 100 calories of various meat alternatives, from lowest to highest:

As you can see, Boca patties are among the most protein-dense sources of meat-free calories. (Sorry, it’s pretty clunky to cite and show all the work for these calculations here, so you’ll just have to trust me on that front.)

Are Boca Burgers Bad for You?

Ultimately, foods are not simply “good” or “bad” for you. It’s a spectrum. There can be good aspects to a food, along with some bad aspects.

Boca Burgers have a great profile when it comes to calories and protein… but they also contain some unhealthy, processed ingredients. Let’s take a closer look at that.

Granted, Boca Burgers do not contain added sugar. And they contain a relatively small amount of oil—only 4 grams of total fat in the All American patty—so they’re not the most processed food out there.

But they contain quite a bit of sodium, with 350 mg in the All American patty and 450 mg in the Original Vegan patty. And a few of the ingredients, like caramel color, are a little sketchy.

There are studies suggesting that caramel color can increase cancer risk. This is due to a carcinogen formed during the creation of caramel color, called 4-methylimidazole. This might become a concern if you’re eating Boca Burgers every day or something.

Boca Burgers are low-calorie veggie burgers that can aid with weight loss. They are much lower in calories than most real hamburgers, as well as Beyond Burgers and Impossible Burgers.

However, keep in mind that total calorie balance is what matters most for weight loss. So Boca Burgers alone cannot make you lose weight. Portion sizes matter, and it matters what else you eat, too.

Are Boca Burgers Good for Diabetics?

Boca Burgers can be a good choice for diabetics, although you may want to eat them without the bun to keep the carbs lower.

Authorities say that veggie burgers can be a good choice for diabetics. That’s because they tend to be lower in calories and fat than real hamburgers. That is certainly the case with Boca Burgers, as discussed above.

Indeed, I found this report of a “Very Low Carb Diabetes Support Group” in Colorado eating some Boca Burgers during one of their events. They recommend adding some olive oil for more healthy fat.

Some diabetics would still object to the amount of processed ingredients in Boca Burgers, though. They may prefer sources of plant protein that are based in whole foods.

Do Boca Burgers Cause Gas?

Boca Burgers are not particularly know for causing gas. However, some people may experience gas due to the soy protein or wheat gluten.

If you know that you’re sensitive to soy or wheat, then you may want to avoid Boca Burgers, as they contain both.

Most Boca Burgers are vegan, but not all of them are. Boca’s All American Veggie Burger is not vegan, as it contains dairy. However, Boca’s Original Vegan Burger and Chik’n Veggie Patties (Original and Spicy) are vegan.

Typically, the box will use the word “Vegan” if the patties are vegan. But you can also check the end of the ingredients list, to quickly see if there is an allergen warning for dairy or eggs.

[Read more about how to read ingredients lists as a vegan.]

Let’s take a look at a couple more Boca meatless products and how they stack up healthwise, too.

Boca Crumbles are a low-calorie option that may be healthier than real ground beef in some regards. However, it is a processed food with risks and drawbacks, as well.

Here are some of the less-healthy aspects of Boca Crumbles:

Boca Chik’n is a low-calorie option that may be healthier than real chicken in some regards. However, it is a processed food with drawbacks, as well.

Here are some of the less-healthy aspects of Boca Chik’n. I’m lumping together the Nuggets and Patties here, as their ingredients are nearly identical:

So as you can see, once again, the answer is not a simple “yes” or “no.” I would consider all these Boca products as being healthy along some lines (low calories, low saturated fat, high protein), and not the healthiest along some others!