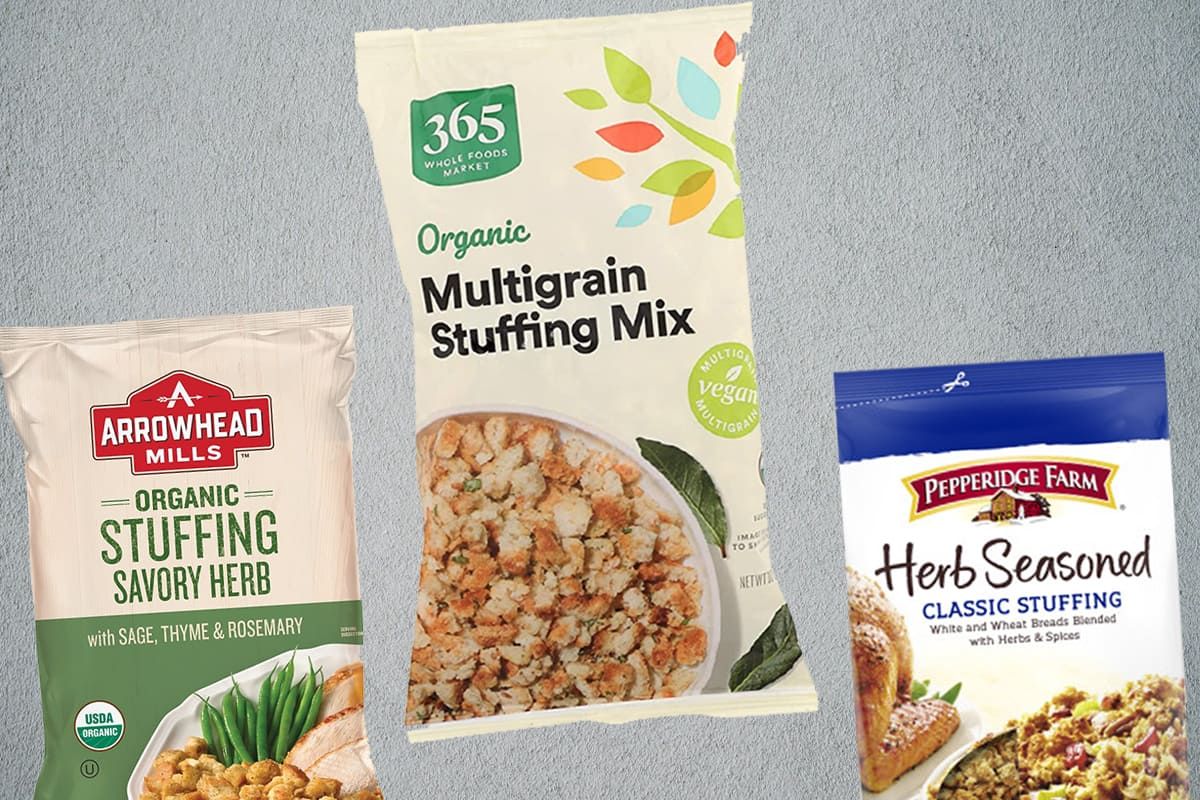 Sometimes it’s funny which products are actually vegan. Stuffing is typically made to be eaten with turkey or chicken—so it’s often part of very non-vegan meals. However, that doesn’t mean stuffing itself is never vegan.

Out of 63 stuffing products I analyzed, 33 were vegan, while 30 were not vegan. The most common animal ingredients in stuffing are chicken broth, chicken fat, and other meat and poultry ingredients. Dairy, eggs, gelatin, and honey are also present in some stuffing.

Below, I’ll share the results of my research into 63 different stuffing products from 23 different brands. You’ll get a clear picture of which popular stuffing brands you should avoid, and which ones are fair game for vegans!

What Stuffing Brands Are Vegan?

The table below provides a quick view of which stuffing brands are vegan. “Mix” denotes that some of that brand’s products are vegan, some are not.

If you want to see the details of specific flavors and products, click the name of the brand to skip to that section below.

Before we get into all these specific brands and products below, let’s answer some common questions about stuffing.

The most common animal ingredients in stuffing are chicken broth, chicken fat, and similar meat and poultry products.

However, even as common as they are, less than half of all stuffing products I analyzed contained such meat ingredients. Most stuffing does not contain meat.

Does Stuffing Have Pork in It?

Most stuffing does not contain pork. There are a few products, particularly Stuffing Balls, that do contain pork—but in that case, “Pork” is typically included in the product name.

Also be aware that Butterball stuffing contains gelatin, which may be pork-derived (or else beef-derived).

Most stuffing does not contain milk or dairy ingredients. However, there are a few stuffings on the market that do contain butter or nonfat dried milk. So it’s worth checking each specific stuffing for these ingredients.

Here’s a list of all the gluten-free stuffing products I analyzed, and whether they contained eggs. Click the brand for a closer look:

Okay, here it is—my detailed breakdown of which stuffing brands are fully vegan. Most of these are store-bought stuffing. However, I’ve also included a few popular restaurants that serve stuffing.

Another quick note: I did not bother noting which products contain “sugar,” “natural flavor,” or other such ingredients that are only possibly animal derived. I focused on the main animal ingredients like meat, dairy, eggs, gelatin, and honey.

365 Organic Multigrain Stuffing Mix at Whole Foods Market is confirmed vegan. However, there is also a Traditional flavor that contains natural chicken flavor. This is presumably derived from real chicken and, therefore, not vegan.

Here’s the full ingredients list for the vegan flavor:

Aleia’s stuffing is not vegan, as it contains egg. This is the case for both Aleia’s Plain Stuffing and Savory Stuffing. It is very common for gluten-free bread and stuffing to contain egg, so this is not a big surprise.

Arnold stuffing appears to be vegan. However, I was only able to check one flavor: Seasoned Cubed Stuffing.

Here’s the full ingredients list for the flavor I was able to find:

Arrowhead Mills stuffing is vegan. Specifically, I can confirm that the Savory Herb flavor does not contain animal ingredients. And it’s also organic!

Most flavors of ASDA stuffing are vegan, including Sage & Onion, Apple & Herb, and the “Free From” gluten-free stuffing. However, ASDA also sells a couple of stuffing products that contain pork and dairy products.

Here’s the full breakdown of the flavors I analyzed and which were vegan:

Aunt Bessie’s stuffing is generally considered vegan. Specifically, I can confirm that their Sage & Onion Stuffing Balls are free of animal-derived ingredients.

Bell’s stuffing is not vegan. All four flavors that I analyzed contained chicken ingredients, such as dried chicken broth and chicken fat. The gluten-free flavor also contains egg.

Here’s the full ingredients list for their Traditional stuffing:

Here’s the ingredients for their gluten-free stuffing, which also includes egg:

Boston Market stuffing is not vegan. It appears to include whey (milk), egg yolks, and egg whites. This is coming from a list of ingredients here (under “Fresh Vegetable Stuffing”). However, that document is from 2016, so it’s always possible the recipe has changed since then.

Boudin Sourdough Stuffing is generally considered vegan. It contains no meat, dairy, or other animal-derived ingredients. Most of the ingredients are also organic.

Butterball stuffing is not vegan. Both flavors—Cornbread and Savory Herb—contain turkey and other animal ingredients.

I wasn’t able to find the full ingredients list for the Cornbread flavor, but the front of the box even says “With Turkey Sausage”—so we know it’s not vegan, just from that!

Here’s the full ingredients list for the Savory Herb flavor:

Some Chef’s Cupboard Stuffing flavors are vegan, but others are not. The vegan flavors include the Cornbread Stuffing Mix, Herbes De Provence, and the Hawaiian Stuffing Mix.

I have to be honest—it’s possible that one or two of these flavors is out-dated. I had to use a mix of sources to find ingredients for all these, so I’m not 100% sure if they were all current. Anyway here’s the breakdown for the flavors I found:

Gillian’s stuffing is not vegan. It contains egg whites and natural chicken flavoring. If you’re looking for gluten-free, vegan stuffing, then consider checking out Morrison’s below.

Here’s the full ingredients list for the Gillian’s stuffing:

Kraft Stove Top Stuffing is not vegan. Every flavor contains meat ingredients such as dried cooked chicken and dried chicken broth. Even the flavors “Traditional Sage” and “Savory Herb” contain these animal ingredients.

As an example, here are the full ingredients for the Savory Herb flavor:

Most flavors of Morrison’s stuffing are vegan. However, I found their “Stuffing Balls” contain pork. Therefore, be sure to choose one of the loose stuffing mixes, not balls.

Another interesting fact about Morrison’s stuffing is that even the gluten-free flavor is vegan. It can be hard to find stuffing that is gluten-free and vegan, as often, gluten-free bread contains egg and/or milk.

Here are the exact flavor names I was able to check from Morrison’s:

And here are the full ingredients for one of the vegan flavors:

Mrs. Cubbisons stuffing is generally considered vegan. None of the flavors contain meat, dairy, or any other animal ingredients that I could tell.

Here’s the full breakdown of flavors:

And here’s one of the full ingredients lists as an example:

And here’s a bonus of Mrs. Cubbisons stuffing: The palm oil is certified as being in compliance with the RSPO (Roundtable on Sustainable Palm Oil). This is good news for animals whose habitats are being endangered by unsustainable palm oil practices.

Read more about palm oil and veganism in my post about whether Crisco is vegan.

Paxo stuffing is generally considered vegan. This includes both flavors—Sage & Onion and Garlic & Thyme. Sometimes you may see a box that says “Garlic & Thyme for Chicken,” but the stuffing itself does not contain chicken.

Here’s the full ingredients for the Sage & Onion flavor:

Pepperidge Farm stuffing is generally considered vegan. None of the flavors contain meat ingredients, butter, or any other ingredients that are clearly animal-derived.

Here’s the full list of flavors I was able to personally check and confirm:

As an example of how Pepperidge Farms pulls off these flavors in a fully vegan way, here are the ingredients for the Sage & Onion flavor:

Quixo stuffing is generally considered vegan. Specifically, I can confirm that the Sage & Onion flavor does not contain any meat, dairy, or other animal-derived ingredients.

If there are other flavors of Quixo stuffing, I wasn’t able to find them. Here’s the full ingredients for the Sage & Onion:

Most flavors of Tesco stuffing are vegan. However, the “Tesco Finest Wild Sage & Buttered Onion Stuffing” flavor contains butter, which is not vegan.

I was able to find four different flavors of Tesco stuffing. Here’s the breakdown in terms of whether they’re each vegan:

And here are the full ingredients for one of the vegan Tesco stuffing products:

The Sage & Onion Stuffing at Toby Carvery is vegan. This is confirmed by the allergen and nutrition pages on their website. (source)

I did not find any other flavor of stuffing listed, so my assumption is that any stuffing you find at Toby Carvery will be vegan. That said, you may want to check with staff when you visit.

As an example, here are the full ingredients for the Classic Cornbread flavor:

Wawa stuffing is not vegan. It is made with chicken base and chicken fat. This was confirmed by a Customer Service Associate in a thread in the Wawa sub-Reddit. And there’s no reason not to believe it’s true, as these chicken ingredients are very common in stuffing.