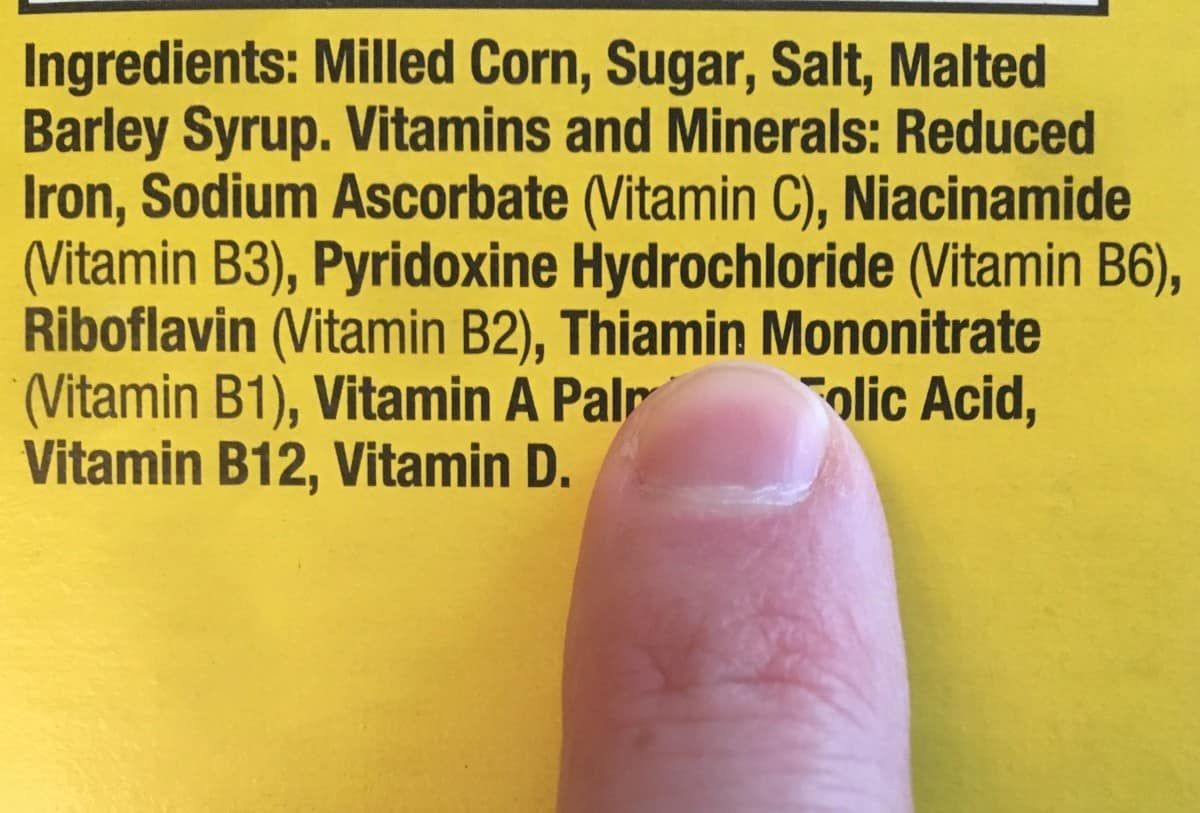 If you’re a vegan like me who is constantly reading ingredients lists, you have probably seen “thiamine mononitrate” at least once. It’s added to many foods today as a source of vitamin B1. I decided to finally do some research to find out more about it.

Keep reading for more details on how this vitamin is produced, the vegan foods where it naturally appears, and whether vegans typically get less thiamine (I did find one concerning study)!

What Is Thiamine Mononitrate?

Thiamine mononitrate is the form of thiamine (vitamin B1) most commonly used to fortify foods. It also commonly appears in pill form as a supplement. In your body, thiamine separates from the nitrate group and is used for many purposes.

Thiamine is a crucial vitamin for humans to consume. It’s used as a co-enzyme in ATP (energy) production. It’s also used in our nervous system to help transmit nerve impulses… and some other stuff that’s hard to understand without a biochemistry degree!

Deficiency of thiamine can cause delirium (source). Severe deficiency can cause a life-threatening condition called beriberi, which gets its name from the Sinhalese word for “extreme weakness.” Doesn’t sound appealing!

Thiamine is also a water-soluble vitamin. This means it does not accumulate in your body fat like the fat-soluble vitamins (A, D, E, and K). There has been no specified upper limit for thiamine consumption (source).

Often, you’ll see thiamine spelled as “thiamin.” Either spelling is technically correct, and there’s actually an interesting story behind that.

How Is Thiamine Mononitrate Made? Is It Vegan?

It’s pretty hard to learn about the exact process used to make thiamine mononitrate. But here’s the short answer: It’s typically synthetically produced and vegan. If you want to know more, here’s what I’ve learned…

The Vegetarian Resource Group (VRG) reports that Schiff Products, inc, one manufacturer of thiamin, has confirmed that they use a synthetic production process. VRG has deemed thiamin “Typically vegan.”

Another reassuring sign is that Solaray makes a thiamin mononitrate supplement (Amazon link) which they specifically label as vegan.

Not to mention, several other companies make thiamin HCL supplements that are also labeled as vegan. Here are the Amazon links to check those out: Solger, EZ Melts, Country Life. (I’ve been happy with several Solger supplements, and they say “vegan” right on the jar. So I’d go with them, personally.)

Note: Before starting new supplements, you should consult your physician.

If you’re trying to increase your thiamine intake for any reason and would rather focus on foods than supplements, check out these food sources. I’ll list the vegan ones first.

Is Thiamine Mononitrate Bad for You?

Thiamine mononitrate is Generally Recognized as Safe (GRAS) by the FDA. As mentioned above, there has been no upper limit officially set on thiamine intake. That said, I wouldn’t recommend going crazy with it—see side effects below.

In the past, before thiamine fortification in foods, a lot more people got thiamine deficiency. Today, most of us don’t need to worry about that (unless you drink a lot of alcohol or fall into other specific groups).

So when you see thiamine mononitrate in food, it’s a good thing! That said, there can be side effects for some people, in some cases.

It’s been noted that consuming thiamine in very high doses can cause an upset stomach (source).

Taking an imbalance of B vitamins can also cause problems (source). One way to reduce this risk is to supplement with a B-complex vitamin rather than individual B-vitamin supplements.

Thiamine can also have interactions with certain drugs—specifically with macrolide antibiotics like azithromycin (source). So check with your physician before starting thiamine supplementation.

And certain people can have allergic reactions—more often to intravenous thiamine, but also to oral supplementation.

Do Vegans Get Lower Levels of Thiamine?

Since thiamine is plentiful in pork, liver, and some other meats, vegans may naturally get a bit less thiamine than meat-eaters.

And if you’re avoiding grains like cereals—maybe because of being gluten-free or paleo, too—then you may end up getting less thiamine for that reason.

However, vitamin B1 is not a major area of concern for most vegans. Vegans are not among the groups most susceptible to thiamine deficiency (source). It’s not one of those nutrients you hear about all the time as a vegan, like B12 or calcium.

I listed some vegan thiamine supplements earlier in the article. Here are the top two options I found in a little more detail: