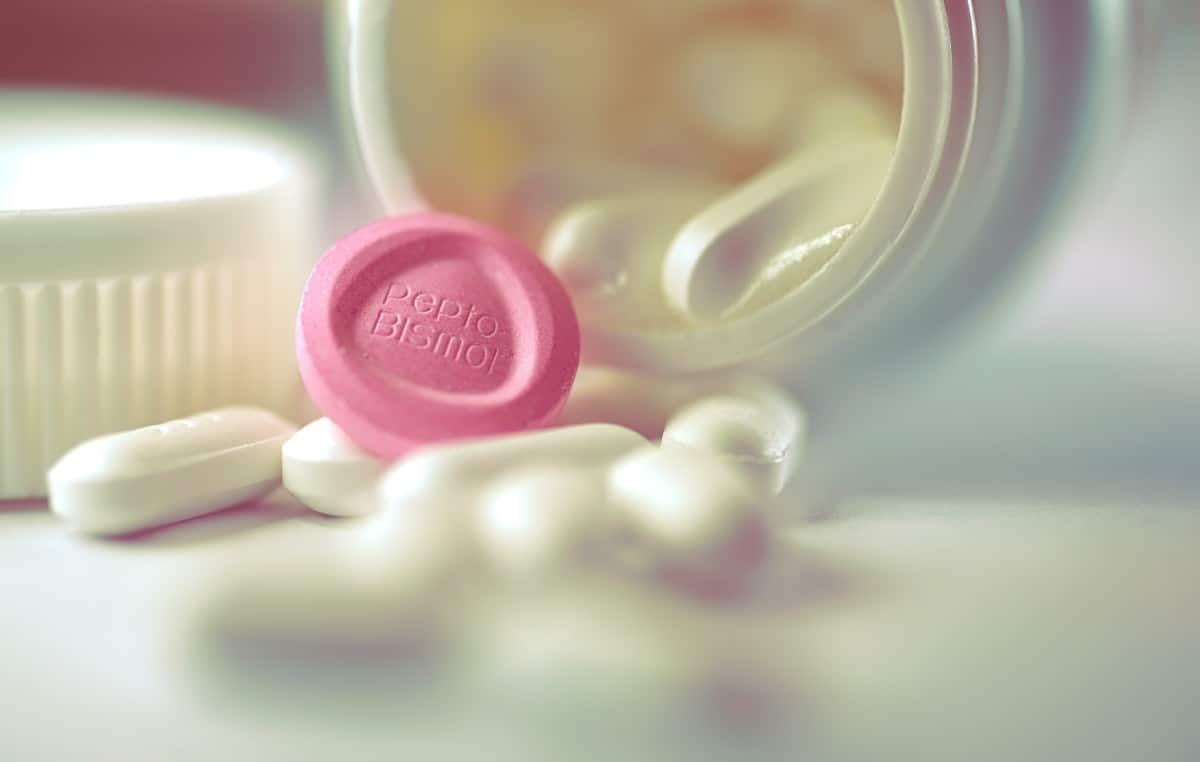 Pepto-Bismol is a bit of a mysterious substance. It’s pink, yet it turns some people’s tongue black. And from a vegan perspective, it may be suspicious due to its milky texture. So I decided to take a closer look at how it’s made.

Is Pepto-Bismol vegan? Most Pepto-Bismol products are considered vegan. However, the Liquicaps are not vegan or vegetarian due to the inclusion of gelatin. Some vegans may also avoid Pepto Bismol due to it being owned by Proctor & Gamble, a company that still does some animal testing.

Read on for a deeper dive into the “gray area” (possibly non-vegan) ingredients in Pepto products! I’ll also explore the legacy of animal testing connected to Proctor & Gamble, its parent company. And I’ll share some natural alternatives to Pepto, if that’s your preference!

The Official Answer From Pepto Bismol

Along with doing my own research into Pepto Bismol’s ingredients (below), I also sent an email to the company. I asked which Pepto products contain animal-derived ingredients. Here was their answer:

“Pepto Bismol LiquCaps and Pepto Bismol Diarrhea LiquiCaps contain animal derivatives, as the LiquiCap shell is made of gelatin.

Other versions do not contain animal by-products.

No versions of Pepto contain milk.”

For the most part, this checks out with the rest of my research, and it’s nice to have the company confirm your suspicions!

That said, some of the most strict vegans out there still may wonder about the animal testing behind Pepto, and some of the inactive ingredients I’ll cover below.

Are There Animal Ingredients in Pepto-Bismol?

So, the only Pepto-Bismol products that are clearly not vegan are the Liquicaps—due to gelatin. That said, for the most strict vegans out there, there still may be some ingredients of concern.

Pretty much all Pepto products use bismuth subsalicylate as the active ingredient, so let’s cover that first.

The active ingredient in Pepto-Bismol is bismuth subsalicylate (pink bismuth). As a non-chemist and outsider to the company, it’s hard to be confident exactly how this ingredient is produced. But it seems to be synthetically produced and vegan.

So the active ingredient in Pepto seems to be vegan to me.

The different Pepto-Bismol products each contain different inactive ingredients. Most of them look fine to me, but there are some “gray area” ingredients, along with one non-vegetarian ingredient.

First, the one non-vegetarian ingredient:

Now, the gray area ingredients found in Pepto products. Some of these are only present in specific products:

Does Pepto-Bismol Contain Milk or Dairy?

Pepto-Bismol does not contain any milk, dairy, or lactose. Representatives from Pepto have confirmed this over email. No version of Pepto contains milk.

It is possible that the gelatin in Pepto Bismol LiquiCaps is derived from pigs. Other than that, there is nothing like pork in any Pepto Bismol product. To avoid the gelatin, simply opt for a Liquid, Tablet, or Chewable version of Pepto—not the LiquiCaps.

Beyond ingredients, most vegans care about whether products are tested on animals. There’s quite a bit to explore when it comes to Pepto and animal testing.

It’s safe to assume that Pepto-Bismol was tested on animals at some point. In fact, I found at least one research paper on Pepto experiments with rats. I’m not sure if there are ongoing animal experiments or not.

Pepto-Bismol is owned by Proctor & Gamble (P&G). Over the years, many animal welfare orgs like PETA have targeted P&G for their animal testing. At times, there have been boycotts of all P&G products.

In the early 2000s, there were campaigns to end some particular nasty testing for Iams dog food (owned by P&G).

Currently, in 2020, it seems that P&G still tests on animals in some cases. For this reason, they are not considered by all to be cruelty-free (source). But they’ve actually done a lot of work to support the movement away from animal testing.

However, P&G also boasts that they have invested over $420 million in developing alternatives to animal testing, and they currently use 50 non-animal types of testing, half of which they helped develop.

Many vegan websites point out that Proctor & Gamble is not consistently cruelty-free. They’re still willing to test products on animals in order to sell them in China and other countries. Some vegans say we should boycott P&G for this. I disagree.

P&G is straight-forward about their position on animal testing: They want it eliminated. And they’re investing hundreds of millions of dollars into alternatives that will make it obsolete. They support a worldwide ban on cosmetic animal testing.

That’s a lot more than you can say for most companies.

Maybe the fact that I’m getting older has led me to be more practical, less radical. But I don’t think it’s helpful to boycott a company that is doing so much to advance us toward a world without animal testing, just because they’re still entangled in it to a degree right now.

If you find Pepto objectionable for any of the reasons above, or just for the taste, here are some natural alternatives you can consider.

Tummydrops are digestive lozenges made with peppermint oil. They can help with upset stomach, nausea, morning sickness, and various digestive issues.

The company markets itself as the natural solution to upset tummies! I personally like that it is clearly labeled as vegan, on the front and back of the package. It also comes in a variety of flavors!

Check out Tummydrops on Amazon here.

This one is more of a preventive measure—but it’s so interesting, I had to include it here. Many guides online will recommend apple cider vinegar (ACV) for just about everything. And that includes digestive issues.

It’s often recommended to take small shots of ACV before your meals. It’s supposed to stimulate your body into producing the digestive enzymes for the meal ahead. But most of us would agree: Vinegar is pretty gross! I’m not taking vinegar shots.

So when I saw these ACV gummies, I was pretty intrigued. There are thousands of reviews, and most are positive. Could be worth trying—it may reduce the need for taking Pepto later!