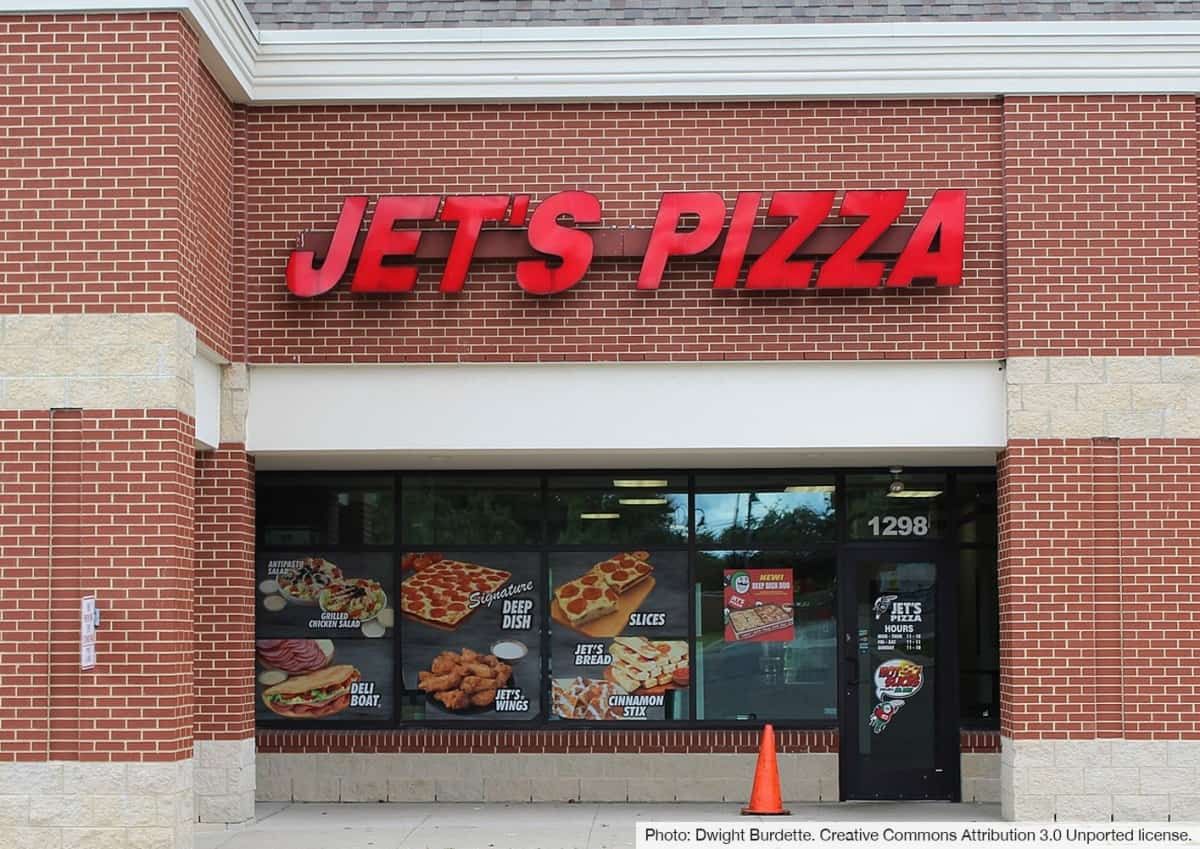 Unfortunately, Jet’s Pizza doesn’t have vegan cheese yet… I know, it’s so sad. They also don’t have any vegan “meat” toppings. Tragic… However, you can get a good cheese-less pizza and a salad. And as a vegan with 13 years of dining experience, I can show you the way.

Below, I’ll share more about how to order these items vegan, and some other menu items that are surprisingly not vegan. I’ll answer some common questions, and I’ll end with a look at the whole-food plant-based options, too!

The following vegan menu was compiled with the help of the nutrition and allergen information on the Jet’s Pizza website.

There’s a Veggie Pizza at Jet’s that you can easily make vegan by just asking to get it without cheese.

When you remove the mozzarella cheese, here’s what remains:

If that’s not exactly what you want, then keep reading, because you can build your own pizza!

2. Build Your Own Vegan Pizza

You’ve actually got quite a few options here, despite the lack of vegan cheese.

Note: The Cauliflower Crust is not vegan, as it contains milk and egg.

Remember: Be sure to say “NO cheese” or to select that option on the website (if ordering online).

You have two different salad options at Jet’s Pizza. Both require ordering them “without cheese”:

You can also get a simple vegan veggie sub at Jet’s Pizza. You need to specifically ask for no cheese, however.

If you get the Veggie Classic Sub without cheese, it’ll be: 8″ sub roll, onions, black olives, green peppers, mushrooms, lettuce, and tomatoes. It also comes with a side of Italian Dressing, which is vegan, so no worries there.

Jet’s has Pepsi products, so plenty of vegan drink options there:

Does Jet’s Pizza Have Vegan Cheese?

Jet’s Pizza does not have vegan cheese. However, you can get a vegan pizza by just ordering your pizza without cheese. (And if you’re really committed, you can add your own vegan cheese at home.)

Jet’s Bread is not vegan, as it comes with butter, parmesan cheese, and Romano cheese. I was unable to confirm whether it is possible to order Jet’s Bread vegan if you say “no cheese or butter.”

It is possible to order dry vegan breadsticks at many pizza places, including Pizza Hut, Papa John’s, and elsewhere. So this may be possible at Jet’s, too. I’d just ask at your local Jet’s to find out.

All of Jet’z pizza dough except for the Cauliflower Crust is vegan.

What if you’re not just vegan but also trying to avoid processed foods? Can you get a whole-food plant-based (WFPB) meal at Jet’s Pizza?

Well, you can get a salad… That would be WFPB without any dressing on it. Jet’s doesn’t post the full ingredients for all their salad dressings, but I’m guessing they all contain oil or sugar. So you could compromise or have your salad without dressing.

In any case, you’re probably not going to fill up with WFPB food at Jet’s!

If you’re looking for which pizza place has the best vegan options, you may want to look at MOD Pizza, Blaze Pizza, and Mellow Mushroom. They all have vegan cheese.

However, I’ve found there to also be decent options at Papa John’s (breadsticks!) and Marco’s Pizza (cinnamon dessert and smoothies!).