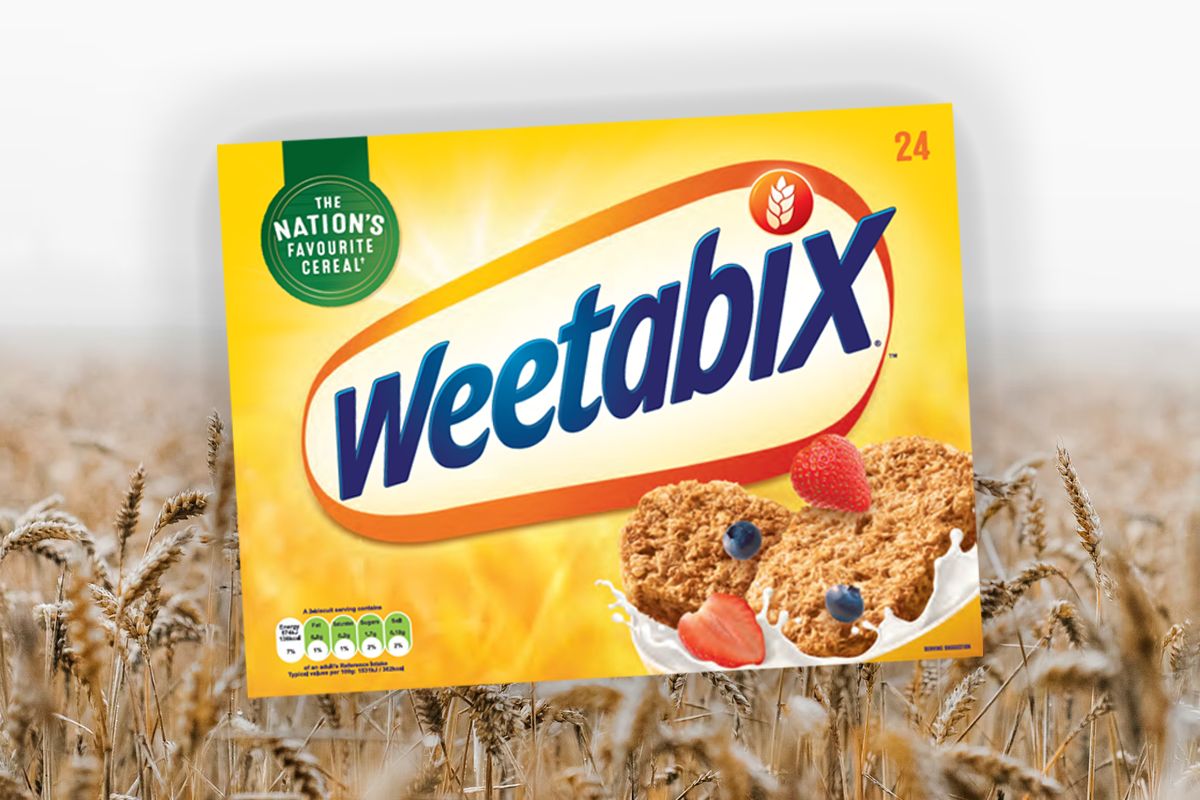 I’ve been hooked on Weetabix cereal ever since I visited England five years ago. The texture is unlike anything I had growing up, and it can be eaten so many ways. But is this healthy-looking cereal actually good for you?

Weetabix is made from whole grain wheat, which gives it more fiber than most cereals. It does have added sugar, but not much—less than 1 gram per biscuit. Weetabix is also a good source of iron, vitamin D, and several B vitamins. This makes it a relatively healthy choice.

Below, I’ll dig into the details of Weetabix ingredients and nutrition facts. I’ll answer questions about Weetabix’s glycemic index, whether it’s good for weight loss, whether it’s okay to eat it every day, and more.

Is Weetabix Good for You?

Here are the nine specific questions I’ll be answering about Weetabix nutrition. Click any of them to skip ahead to that section—or just keep scrolling to read them all:

1. What Is Weetabix Made Of?

Let’s start by looking at some actual Weetabix ingredients. Here are the ingredients for five popular Weetabix products sold in the United Kingdom:

Overall, Weetabix ingredients are pretty simple. It’s whole wheat, a few ingredients for flavor and sweetness, and then some fortified nutrients.

The key to whether Weetabix is “healthy” may have to do more with the numbers, rather than the ingredients list itself: How much sugar is there? How much fiber? What’s the glycemic index?

So let’s take a closer look at those areas now.

2. Is Weetabix Low in Sugar?

Weetabix Original is quite low in sugar, with only about 0.8 grams per biscuit. Other flavors like Weetabix Chocolate have as much as four times more sugar. But that’s still only around half as much sugar per 100g serving as in popular American cereals like Frosted Flakes.

Weetabix markets their cereal as “Low in Sugar.” But what counts as “Low”? Let’s take a look at the specific numbers. And let’s see how it varies between the Original product vs other flavors:

If you’re struggling to imagine what a 100g serving of Weetabix looks like, it’s about 5 biscuits of the full-size Weetabix.

So Weetabix Original has less than 1 gram of sugar per biscuit. I would agree that’s pretty low! But the story changes a bit if you look at Weetabix Banana flavor, or the Chocolate Chip Minis.

Even those higher-sugar Weetabix flavors are relatively low in sugar compared to popular American cereals, though. Frosted Flakes has 35 grams of sugar in each 100 grams, so about twice as much as even Weetabix Chocolate (17g).

But there’s something else to consider when thinking about sugar content, too: Glycemic index (GI).

If you’re concerned about your blood-sugar levels, it’s important to remember that carbs get broken down into sugars in your body, too. And quick-digesting carbs can spike your blood sugar, too, even if they’re not “sugar.”

So let’s look at glycemic index next.

There’s actually been some controversy about Weetabix’s score on the glycemic index. Back in 2012, Weetabix was slammed by an advertising watchdog for making a misleading claim about the product’s “slowly released energy.”

In their own defense, the Weetabix company cited a research study in which the cereal scored a 47 on the glycemic index when eaten with semi-skimmed milk. (Any score below 55 is considered “low.”)

Of course, most people do not eat Weetabix dry by itself. It’s almost always eaten with milk. But the advertisement didn’t specify that, and Weetabix was ordered to not make the potentially misleading claim again.

Now, before moving on, I want to add: Glycemic index scores for foods can often vary from study to study—and interestingly, from person to person. So I wouldn’t put a ton of stock in the precise numbers cited in GI studies.

If blood-sugar control is important to you, then I’d be a bit cautious with Weetabix. On the positive side, yes, it’s a high-fiber food made with whole grain. But it’s also processed into thin flakes that can be digested more quickly than in-tact grains.

As explained in the “Whole Grain Hierarchy” video by Brenda Davis, RDN, whole grain cereals like Weetabix are generally not quite as healthy and low-GI as in-tact whole grains.

So, proceed with caution. You may want to test your individual blood-sugar response to Weetabix before assuming it’s an optimal choice for you.

4. Is Weetabix High in Fibre?

Here is a table showing exactly how Weetabix compares to several other popular cereals for fiber content:

As you can see, Weetabix is by no means the highest-fiber cereal… But it’s a relatively high-fiber choice, thanks to being made from whole grain wheat.

5. Is Weetabix High in Iron?

Weetabix is a good source of iron. It supplies 12mg of iron per 100 grams, or about 2.3mg of iron per Weetabix biscuit. In a 100g serving, Weetabix has 86% of the Reference Intake (RI) for iron, based on the needs of an adult with a 2,000 calorie diet.

If you need to improve your iron intake, I have a special tip for you: Eat vitamin C at the same meal as your Weetabix. Vitamin C is shown to improve absorption of nonheme iron when eaten together.

So have some fruit with your Weetabix! Here’s a list of high vitamin–C fruits.

6. Is Weetabix an Ultra Processed Food?

And yeah, there’s nothing else that is particularly bad or “ultra processed” in Weetabix. By itself, it’s not that bad or that great. It’s mostly just whole grain wheat with a little added sugar.

7. Is Weetabix Good For Weight Loss?

Weetabix is a decent food to include in a weight loss diet. It is high in fiber, which helps fill you up. Compared to other cereals, it has less sugar and other processed ingredients, so it has fewer empty calories.

By itself, a few servings of Weetabix will not make or break your weight loss diet. Weight loss depends on your overall diet and lifestyle. However, choosing whole grain foods like Weetabix can help you feel satisfied on fewer calories, making it easier to lose weight.

The details matter, though. Remember from our analysis of sugar content above—some Weetabix flavors are much healthier than others. The Original, Protein, or Oatibix flavors are good choices to help with weight loss.

You can also aid your weight loss journey with your choice of milk. Did you know that unsweetened almond milk is only about 30 calories per cup? That’s only ~25% of the calories of 2% cow’s milk!

In the end, if you’re burning more calories than you’re eating each day/week overall, you should lose weight—whether those calories include some Weetabix or not. But surely, Weetabix can fit right into a smart weight-loss plan.

8. Is It Ok to Eat Weetabix Every Day?

There should be no problem for most people eating Weetabix every day. However, the Weetabix company recommends that adults eat no more than four Weetabix biscuits a day.

Here is a quote from the Weetabix FAQ page on this issue:

“Weetabix is fortified with certain vitamins and minerals and if eaten to excess, then you could be taking in too much of these nutrients. We would recommend that an adult eats no more than four (4) Weetabix biscuits per day.” (source)

Generally speaking, you want to have room in your diet for a variety of healthy foods. If you eat too much Weetabix, you might not have enough room left for vegetables, fruits, nuts, seeds, beans, and other wholesome whole foods.

Weetabix Original and most other Weetabix flavors are generally considered vegan. However, Weetabix Melts are not vegan, as they contain milk ingredients.

The only vegan complaint I could see against Weetabix Original is that the sugar could be processed with bone char. But most vegans are not so picky to boycott foods over that detail.

Most vegans would argue that Weetabix is vegan. In fact, it was a fellow vegan who introduced Weetabix cereal to me. Just avoid the “Weetabix Melts,” which have milk in their chocolate filling.

1. This is the best vegan multivitamin I’ve found in 14 years of being vegan. It has vitamin B12, vitamin D, omega-3—and nothing else. Translation: It only has the nutrients vegans are actually low in. Read my full review of Future Kind’s multivitamin here (with 10% discount).