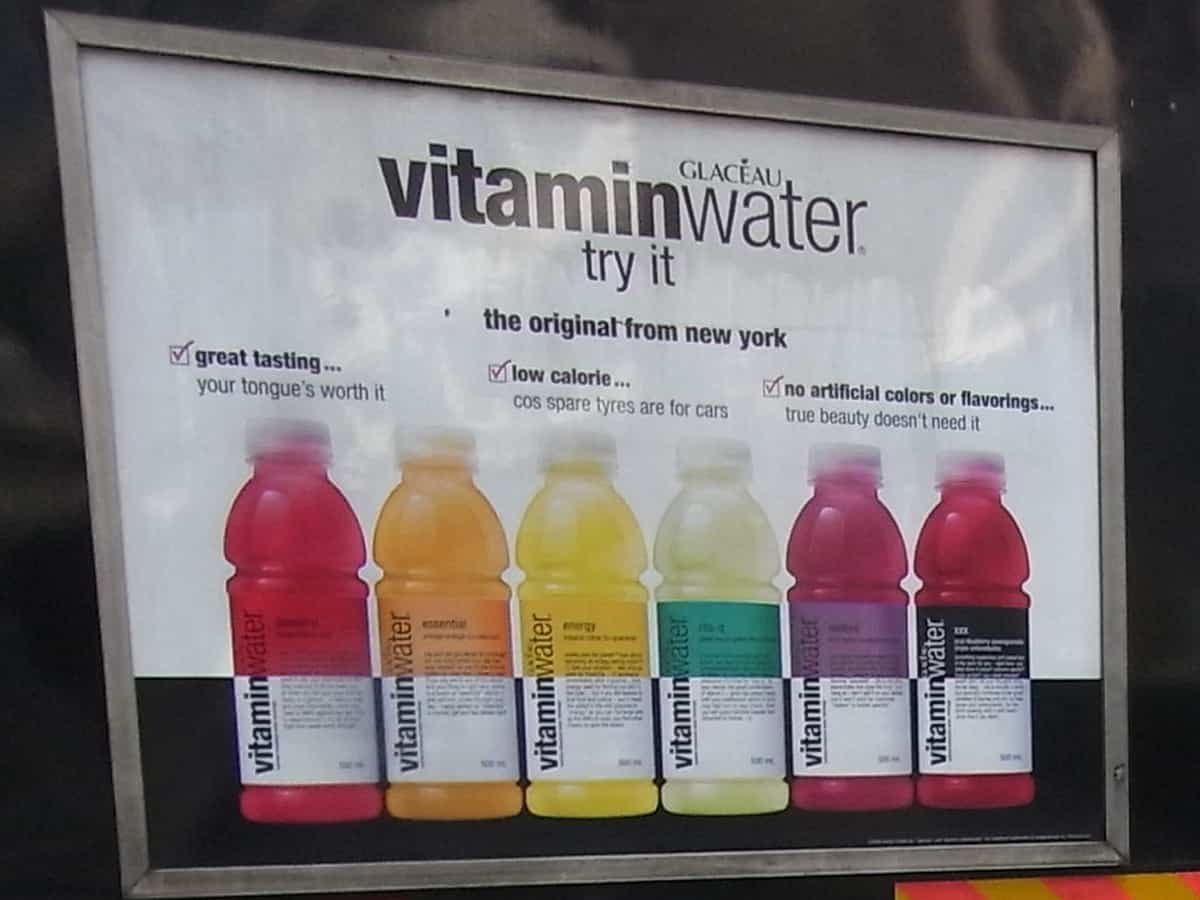 In the past, I always just assumed that Vitamin Water was vegan. None of the ingredients stuck out to me as known animal products. But with all those long vitamin names, I couldn’t be 100% sure. I decided to finally ask the company.

So, is Vitamin Water vegan? Yes, Vitamin Water is vegan. All flavors of Glacéau Vitaminwater, Vitaminwater Zero, and Smartwater have been confirmed to be vegan and vegetarian-friendly by the company. These products include no animal ingredients.

Below I’ll share the exact response I got from Glaceau. I’ll also address some of the apparently outdated or false information I found online about why Vitaminwater supposedly isn’t vegan.

I sent Glacéau, the producer of Vitamin Water, asking which flavors of vitaminwater and vitaminwater zero are vegan and which are not.

Here’s what they said: “all vitaminwater®, vitaminwater zero™, and smartwater® products are vegan and vegetarian friendly.”

In my mind, that is pretty conclusive. As of October 2019, Vitamin Water is vegan.

One side note: Vitamin Water is not actually a great source of the most important vitamins to get as a vegan: vitamin B12, vitamin D, and omega-3s.

Vitamin Water does often include B12, but the flavors I’ve looked at don’t have vitamin D, and they don’t have omega-3s.

If you want to cover all your vegan vitamin bases, I recommend checking out Future Kind multivitamins (link to my full review). They’re an all-vegan company making a multivitamin formulated exactly for vegans.

So… All Flavors Are Vegan?

Just to double-check what they said a little bit, I spent some time looking through the ingredients lists on the Vitaminwater website.

I reviewed a bunch of the flavors, using the knowledge and experience I’ve gathered over 12 years of reading ingredients lists as a vegan. And it checks out.

I recognized no definite animal ingredients. There were a couple of ingredients that can be sourced from animals (more on those below). But since the company also stated that it is a vegan-friendly product line, we can assume it is vegan.

Is the “Glycerol Ester of Rosin” in Vitaminwater Vegan?

“Glycerol ester of rosin” is an ingredient you’ll see a lot in soft drinks, especially orange ones. (For example, the Tropical Citrus flavor of Vitaminwater has it.)

Basically, it’s one of these ingredients that can be sourced from plants or animals. We just don’t know from reading the label.

Luckily in this case, Glaceau has told us directly: None of the ingredients of Vitamin Water are from animals. So we know the glycerol ester of rosin in Vitamin Water is vegan.

Even though Glaceau has confirmed that the vitaminwater ingredients are from plants, let’s talk about this issue a bit more in general.

There are a lot of ingredients you’ll encounter as a vegan which could be from plants or animals. “Natural flavors” and “mono- and diglycerides” are two very common examples.

Some vegans will respond to these ingredients by saying, “I should be on the safe side and not eat it.” But that’s not the approach I take.

Here’s why: By far, the biggest impact of your vegan diet is going to come by refusing to eat meat, dairy, and eggs. If you cover just those basics, you’ve pretty much already done what will make a difference.

Personally, I also choose to avoid a few other minor animal ingredients that we know come from animals, like gelatin, honey, and carmine (I included a list of a few more in this post). But I bet the impact I have is minimal by avoiding them.

If you want to be the best vegan that impacts the world the most… Channel that energy into sharing vegan food and ideas with other people. Don’t make it about obsessing over every minor ingredient that was possibly sourced from animals in your own diet.

Is There Non-Vegan Vitamin D in Vitamin Water?

There used to be a page on Coca-Cola Great Britain’s website which states that “some variants from the glaceau vitaminwater range contain vitamin D and this may be sourced from lanolin in sheep’s wool meaning that they also may not be suitable for vegans.”

This is believable when you read it because, indeed, a lot of vitamin D3 that is used to fortify food products comes from sheep’s wool. But I actually suspect that this information is out of date or incorrect.

I checked the ingredients for a bunch of different Vitamin Water flavors, including those offered specifically in Great Britain, and I didn’t see any vitamin D.

(I would also say that consuming vitamin D that possibly came from sheep’s wool is not that big of a deal, and many vegans would be okay with it—see my digression above about that.)

I’ll also mention, another reason this same webpage on Coca-Cola GR’s website seems to be out of date is because it says, “The following drinks are not free from animal derivatives and are therefore unsuitable for vegetarians and vegans… Glaceau Vitaminwater Zero Sunshine and Multi V.”

But I looked up the current ingredients for both of these products, and I found no suspicious ingredients from a vegan perspective.

And again, Glaceau told me directly in October 2019 that all Vitamin Water and Vitamin Water Zero products are vegan-friendly. So I just think this was outdated or incorrect information on the Coca-Cola GR website. Disregard it.

Is the Sugar in Vitamin Water Filtered with Bone Char?

When you see sugar listed as an ingredient, typically that sugar has been processed and refined using a certain process. Sometimes, this process includes the use of bone char, an animal product.

Typically, we have no way of knowing whether the sugar in a product was filtered with bone char or not. So sugar can be one of these ingredients like I mentioned above: We don’t know if it’s strictly vegan or not.

But I would give the same answer here as I gave for “glycerol ester of rosin” above:

First, Glaceau stated that all flavors of Vitamin Water are vegan-friendly. So I feel comfortable assuming that the sugar in it is also vegan-friendly.

Secondly, as I mentioned above, I’m just really not that concerned about ingredients like this which could possibly have involved an animal product at some point in production. If the company said it’s vegan, I believe them.

Is Vitamin Water Bad for You, Though?

A vegan diet is generally a healthier diet than the way most Americans eat. But that doesn’t mean that all vegan products are healthy.

So, is Vitamin Water healthy? Vitamin Water is mostly just water, sugar or other sweeteners, and vitamins. It is not remarkably good or bad for you by itself. Drinking liquid calories like Vitamin Water can lead to weight gain, but typically only if your total calorie intake exceeds the calories you burn.

The vitamins included in Vitamin Water are probably only marginally helpful for the average person. My guess is that eating vegetables and fruit would be a much healthier way to get the same vitamins into your diet.

If you want to drink Vitamin Water, it’s not going to be what kills you. It could be included in a healthy or unhealthy diet.

Vitamin Water is owned by Coca-Cola. And Coca-Cola is a big corporation that is likely involved in many dubious practices around the globe.

Over the years I’ve heard a lot of accusations that Coca-Cola is one of the biggest polluters among major brands. (Supposedly they’re the #1 plastic polluter.)

I’ve also heard that significant animal testing was involved in the development of Vitamin Water products originally. But Coca-Cola stopped all animal testing in 2007.

Overall, it’s no surprise if Coca-Cola is involved in some problematic practices. That’s just what you get with big corporations. I’m sure I could dig up just as much criticism about Pepsi or even smaller brands.

If you feel gross about supporting Coca-Cola, you might consider boycotting Vitamin Water for that reason. Personally, I don’t feel there’s a need for vegans to boycott Coke.

Like I mentioned above, I think you should focus on boycotting the main animal foods. Beyond that, I don’t think there’s much utility in trying to obtain personal purity of only supporting the very best companies out there.

Leave yourself some options for beverages, and take it easy. Then channel your frustrations into activism if you feel a need to fight back.