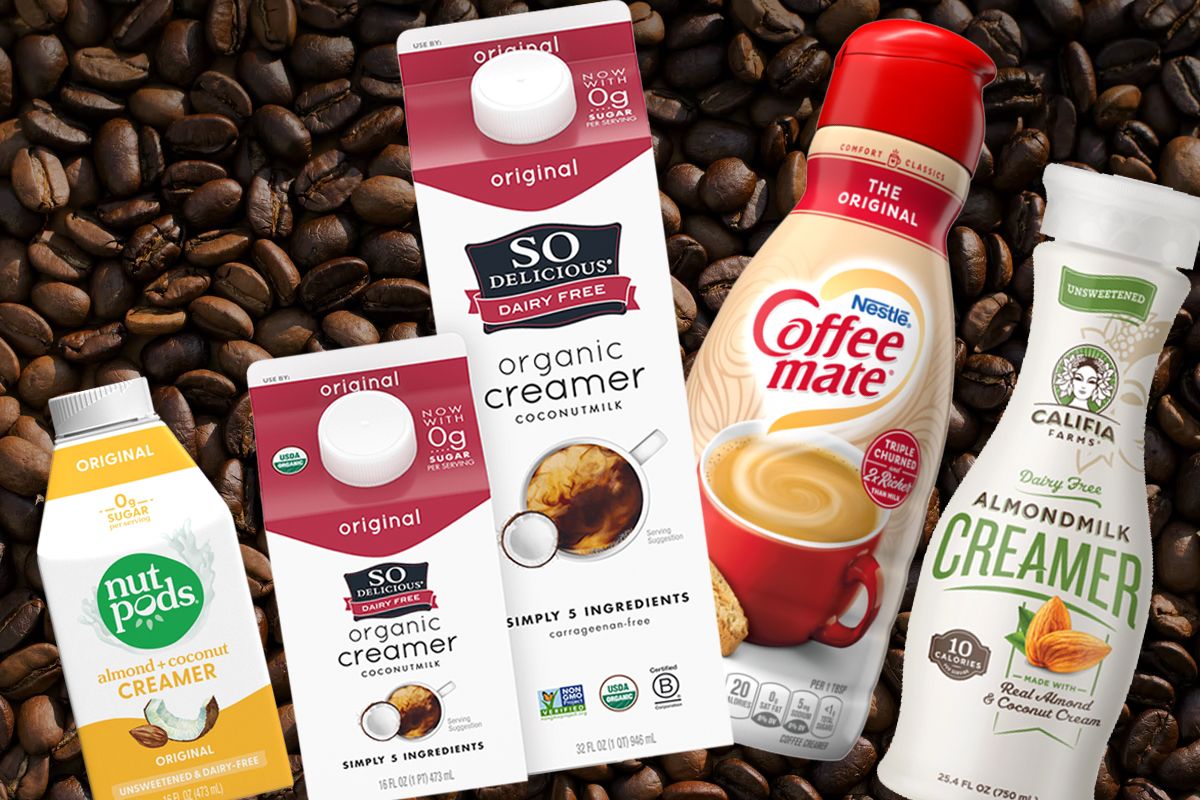 Adding heavy cream or half and half to your coffee is a quick way to add a bunch of saturated fat and calories. But are non-dairy creamers really any better for you? Or are they just processed junk?

Non-dairy creamer typically has fewer calories and less saturated fat than heavy cream or half and half. This generally makes it a healthier choice. However, some brands of non-dairy creamer, such as Coffee Mate, contain unhealthy processed oil and sugar. Unsweetened non-dairy creamers are the healthiest option.

Is Non-Dairy Creamer Good for You?

Here are the 8 specific questions I answer in this post. Click any of them to skip ahead, or just scroll down to read them all:

1. What Is Non-Dairy Creamer Made Of?

Let’s start by looking at some actual non-dairy creamer ingredients. Here are the ingredients for 4 popular creamers from Coffee Mate, So Delicious, Califia Farms, and Nut Pods:

Overall, the first impression I’m getting is that Coffee Mate is not very healthy, but other leading brands of non-dairy creamer are fine.

Next, let’s look closer at the nutrition labels for each of these brands—and compare them with heavy cream and half and half. We’ll start with calories!

If you normally add 1 tablespoon of cream or half and half to your coffee, then you’d cut about 30 calories by switching to non-dairy creamer. That may not sound like much, but it could add up if you drink coffee a lot.

Here’s the amount of calories for each of the non-dairy creamer brands I specifically looked at:

Keep in mind that some other non-dairy creamers may be higher in calories. Nutiva has an MCT creamer which is 40 calories per tablespoon, for example. So check your specific brand.

In the big picture of things, a tablespoon or two of cream won’t be the reason you gain or lose a ton of weight. But if you use it every day, it could be a bit fattening. Switching to non-dairy creamer could help you lose weight.

3. Does Non-Dairy Creamer Have Sugar?

Some non-dairy creamer products have sugar, while others are unsweetened. Even the brands with sugar typically don’t have much. Coffee Mate, Califia Farms, Silk, and Nutiva all sell non-dairy creamers with 1 gram of sugar or less per serving.

Keep in mind that the exact amount of sugar will vary by brand. You may find non-dairy creamers with 4 or 5 grams of sugar per serving.

However, from my research, it seems the most common situation is for non-dairy creamers to be very low sugar or sugar free.

4. Does Non-Dairy Creamer Have Saturated Fat?

Some brands of non-dairy creamer have a small amount of saturated fat per serving (from coconut). In such cases, it is still typically less than 1/3 of the saturated fat in heavy cream. To avoid saturated fat entirely, you can choose an almond milk creamer like the one from Califia Farms.

5. Does Non-Dairy Creamer Have Trans Fat?

In 2015, the FDA determined partially hydrogenated oils to no longer be “Generally Recognized as Safe” (GRAS) due to health concerns with trans fat.

As you can also see below, the three dairy-free brands I’m analyzing in this post are also all free of trans fat. In fact, none of them have hydrogenated oils, either:

6. Is Non-Dairy Creamer Ok For Keto?

Of course, be sure to be mindful of your portions if you’re keto and using a non-dairy creamer with 2g of carbs per serving. It could add up if adding multiple tablespoons to multiple drinks.

7. Is Too Much Coffee Mate Bad for You?

First of all, the fat source for Coffee Mate is typically vegetable oil, rather than coconut cream or almonds like other brands. So the fat tends to be more processed.

The omega ratio of the fats in Coffee Mate may also be inflammatory, since some of their products contain soybean oil, which is particularly high in omega-6 fat. Most Americans and Western people in general eat too much omega-6 already.

Secondly, Coffee Mate is often sweetened with corn syrup solids. This adds some refined sugar/carbs that other brands don’t have. It’s not much per serving (less than 1 gram), however.

Lastly, many Coffee Mate products have carrageenan, which is a controversial ingredient that may have adverse affects on gut health.

Of course, you may feel just fine using Coffee Mate. It’s not the worst thing you could eat. But just know—it’s mostly processed corn syrup and vegetable oil. Choosing another, less processed creamer would be healthier.

Most brands of non-dairy creamer are vegan. However, some brands like Coffee Mate contain a “milk derivative” like sodium caseinate. These milk derivatives are altered forms of milk, and they are generally not considered vegan.

Most non-dairy creamers are made from almond milk or coconut cream. Most of them do not contain any dairy or animal products at all, so they are vegan. But I would check the ingredients for any mention of milk.

Most Coffee Mate products have sodium caseinate, which comes from milk. I actually have a whole separate post on milk derivatives. But here’s the short version: