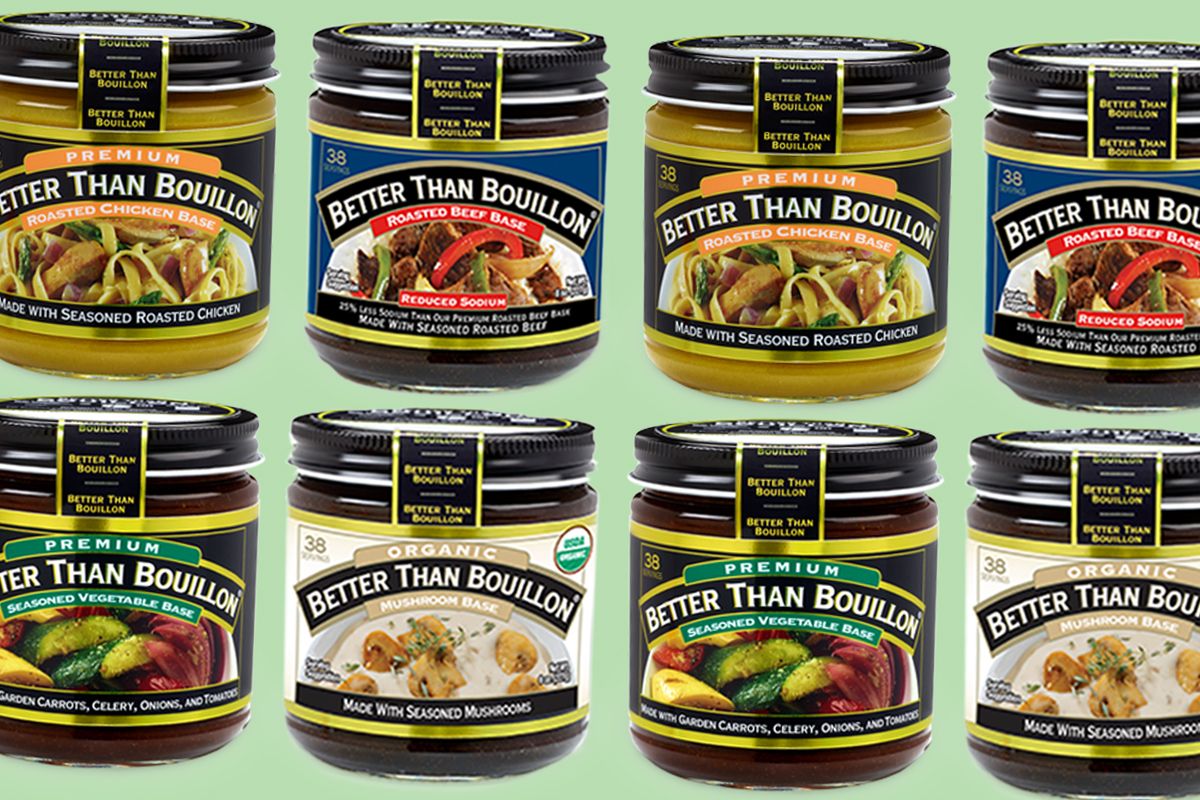 Better Than Bouillon contains real vegetables and healthy spices like turmeric. However, it also has several highly processed ingredients like soybean oil, sugar, and maltodextrin. Better Than Bouillon also has up to 700mg of sodium per serving. This makes it only moderately healthy.

Below, I’ll take a look at several flavors of Better Than Bouillon—including their Organic and Reduced Sodium offerings. I’ll cover sodium, sugar, and MSG in detail. I’ll also share which flavors are vegan, along with two alternative options for healthy broth!

Is Better Than Bouillon Good for You?

Here are the five questions I’ll be answering about Better Than Bouillon. Click any of them to skip ahead to that section—or just keep reading to learn it all:

1. What Ingredients Are in Better Than Bouillon?

Let’s start by looking the ingredients for 3 different Better Than Bouillon products. This way, we can check the organic line, the reduced sodium line, and the normal “premium” line.

Overall, there are quite a few processed ingredients in Better Than Bouillon. But some of these are honestly only included in very small amounts. So let’s move on to looking at some actual numbers. We’ll start with sodium!

2. Is Better Than Bouillon High in Sodium?

Soup can be such a healthy food, but it often comes with high sodium. That’s especially true of canned soup—but any soup broth can end up being very salty.

Here is the sodium content for six flavors of Better Than Bouillon:

I was surprised that the “Reduced Sodium” flavors of Better Than Bouillon are not that much lower in sodium than the other flavors. They still have 500+ mg of sodium per cup of broth they make.

To illustrate the point, below are just a random sampling of other popular broth products I found on Amazon. As you can see, the sodium levels vary a lot, between ~100mg and ~1,000mg per cup of broth:

As you can see, there are several “Low Sodium” options on the market that are much lower in sodium (120mg) than the “Reduced Sodium” line from Better Than Bouillon (500mg). You can even find “unsalted” broth options, if you want to really cut the sodium.

3. Does Better Than Bouillon Have Sugar?

Below is a chart of the carb content and sugar content in four Better Than Bouillon flavors:

When I looked through the ingredients of Better Than Bouillon, I took note of various processed carbs: Sugar, maltodextrin, corn syrup solids, food starch, and potato starch.

But in my view, none of these ingredients are really that bad if you’re only getting like 1 gram per serving. Processed carbs really become harmful when you’re eating them as a major part of your diet. (source)

So, personally, I wouldn’t worry too much about the sugar and carbs in Better Than Bouillon. They don’t amount to much. The sodium would be a bigger concern to me than the sugar.

4. Does Better Than Bouillon Have MSG?

Better Than Bouillon does not have added MSG. Some food bloggers argue that Better Than Bouillon contains MSG under other names, such as “hydrolyzed soy protein.” But even this should not be a concern, as the scientific consensus is that MSG is harmless.

If you dig into the details of monosodium glutamate (MSG) and its history, you’ll find there’s not much to substantiate the fears people have. You’ll mostly find anecdotal reports of headaches or numbness, which haven’t held up in scientific studies.

Many foods naturally contain glutamate, including the breast milk we drink as babies. And research has repeatedly shown it to have no ill effects. (source)

Alex Renton, writing for The Guardian, summed it up like this: “[E]very concerned public body that ever investigated [MSG] has given it a clean bill of health.”

If you want to read more about the safety of MSG, check out this article from the European Journal of Clinical Nutrition, which has been cited in other peer-reviewed journals dozens of times since its publication.

5. Is Better Than Bouillon Vegan?

As a vegan of 14 years, I’ve long used the Seasoned Vegetable Base for my homemade soups. It’s certified vegan and clearly marked with a vegan symbol on the packaging.

If you’re not concerned too much with your sodium intake, I think Better Than Bouillon is a decently healthy and convenient option. I’ve personally used it for many homemade soups that I would consider healthy.

But if you need to really cut your sodium intake—or if you feel extra picky about sugar, oil, or MSG—there are options that are even healthier.

The first option would be to make your own broth. This will allow you to use any mix of ingredients you want. It’s really not that hard, and there are many guides you can follow online.

Another good option would be finding an “unsalted” broth. These products often eliminate nearly all the sodium. And then you can add whatever else you want from there to bring the taste up to your standards.