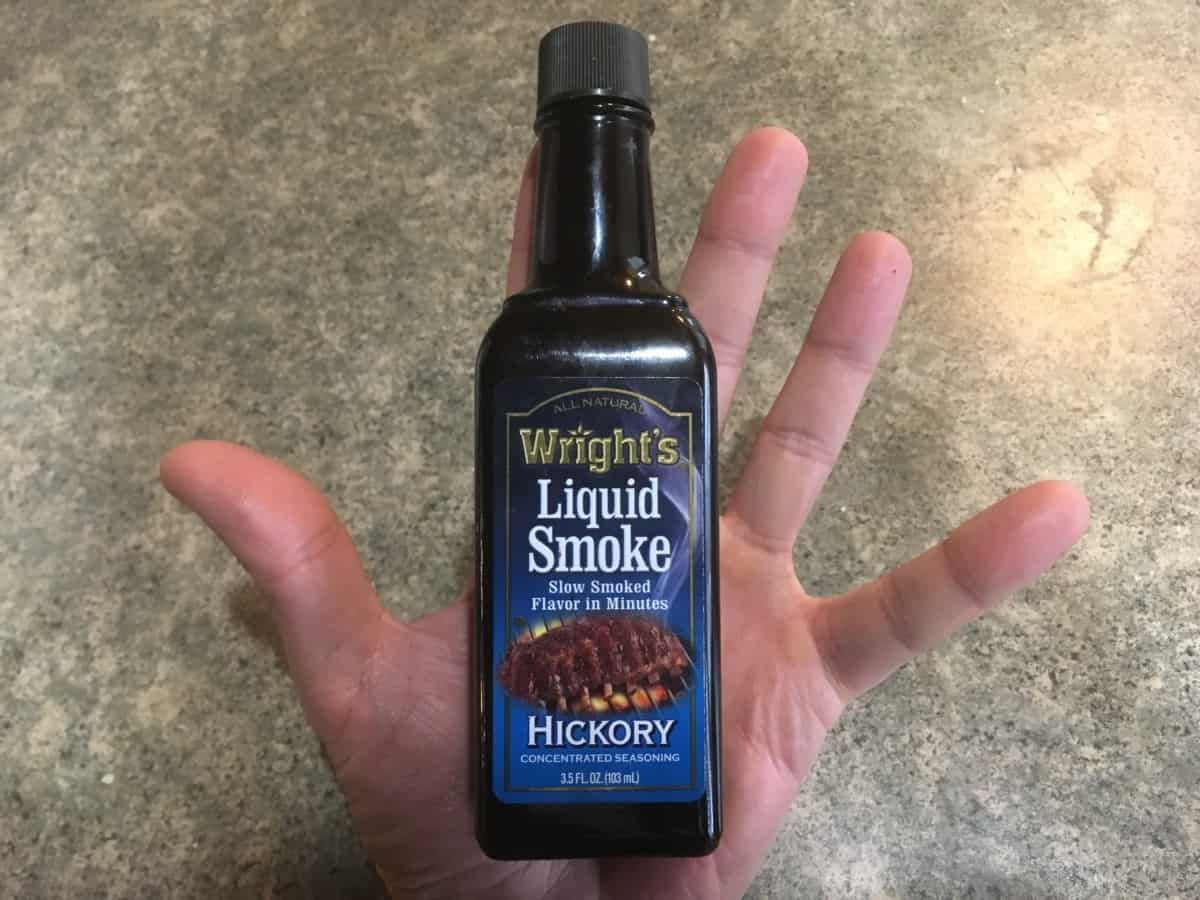 When it comes to smokey, barbecue flavors, it can be hard to keep track of what exactly is vegan. I’ve covered how BBQ sauce is usually vegan—but I’ve also covered how some BBQ chips are not. So what about liquid smoke?

Is liquid smoke vegan? Liquid smoke is generally vegan. The smoke flavor is produced by condensing actual smoke from burning wood. Animal by-products are rarely, if ever, added to the recipe. Colgin, Durkee, Figaro, Stubb’s, and Wright’s liquid smoke are all vegan.

Below, I’ll take a closer look at each popular brand of liquid smoke to confirm that they’re vegan. I’ll also address some of the safety concerns people have had with liquid smoke and cancer risk. Do you need to be worried?

How Is the Smoke Flavor in Liquid Smoke Made?

My concern with liquid smoke as a vegan was that it might involve meat somewhere in the production process. But it’s really just a product of burning wood.

Liquid smoke was introduced to the world in 1985 by Ernest H. Wright. He discovered that when the hot smoke of a fire comes into contact with cold air, a liquid is produced that can be distilled and filtered from impurities.

This yellowish-brown liquid has the concentrated essence of the smoke, and thus, “liquid smoke” is born.

Today, liquid smoke is used by barbeque lovers to give their food a wonderful aroma and smoky essence—even if it’s cooked on the stove or in the oven.

Liquid smoke is primarily just made from smoke, along with a few other plant-based additives such as caramel color and vinegar. I don’t know of any sneaky animal byproducts getting in there.

This makes liquid smoke completely vegan unless it’s clearly stated that a specific flavor or brand contains an animal-derived substance.

Five of the most popular liquid smoke brands are Colgin, Durkee, Figaro, Stubb’s, and Wright’s.

Let’s dive into what we know about the ingredients and vegan status of each.

Colgin liquid smoke is vegan. As the Colgin website clearly states, “Colgin Natural Liquid Smoke does not contain Animal Byproducts.” The smoke flavor is made from burning wood and condensing the smoke.

Colgin is my personal brand of choice when it comes to liquid smoke. I add it to many of my lentil and bean dishes, as well as to my tempeh bacon.

Colgin’s slogan is, “bringing the taste of outdoors to your door since 1869.” It’s a U.S. best-seller and it can be easily found in all major department stores.

Durkee liquid smoke is vegan, gluten-free, and MSG-free. The smoke flavor is created by burning wood and condensing the smoke. The ingredients list includes no animal byproducts.

Durkee prides itself on having gluten-free and MSG-free liquid smoke. But the ingredients are also completely vegan:

Figaro liquid smoke is vegan. The flavor is made by simply burning wood and condensing the smoke. The full ingredients list does not contain any animal byproducts.

Their website also offers many other yummy sauces, such as steak and buffalo sauce. It also contains a lot of delicious recipes containing liquid smoke, many of which are vegan.

After checking the ingredients, we can confirm that this is a completely vegan option:

Stubb’s liquid smoke is vegan. The smoke flavor is made with condensed smoke from burning wood. If you look at the ingredients list, there are no animal ingredients in the product.

Stubb’s is a great brand. They make my favorite barbecue sauce. Honestly, I haven’t tried their liquid smoke yet, but it looks to be vegan.

These are completely vegan (and gluten-free). If you want to try Stubb’s liquid smoke, you can buy some on Amazon here!

Wright’s liquid smoke is vegan, as confirmed by the company. The hickory smoke flavor is produced by burning wood and condensing the smoke, so that is a vegan-friendly process. The only other ingredient is spring water, which is also vegan-friendly.

Just to be certain that Wright’s liquid smoke was vegan, I emailed B&G Foods in December 2019, and this was their response:

“Wrights Liquid Smoke is suitable for a vegan diet.”

Wright’s was the liquid smoke brand that my mom had on hand recently when I visited her. Seems to be a classic, much-loved brand with a simple, natural recipe. We used it to season some tofu for tacos, and everyone thought it turned out great!

My sense is that liquid smoke is not raw vegan. Raw veganism dictates that food only be heated to temperatures below 108 degrees Fahrenheit. But liquid smoke is a product of burning wood, which is much hotter than that.

However, for ideas of how to integrate smoke-like flavors into a raw vegan diet, check out this blog post full of raw vegan bacon recipes.

How Safe Is Liquid Smoke?

Smoke isn’t necessarily the healthiest thing for us. We knowing smoking cigarettes is unhealthy, and inhaling too much smoke from a fire is harmful, too. So what about eating liquid smoke?

There have been a bunch of studies approaching the health impacts of liquid smoke from different angles. Overall, I think the balance of evidence suggests that liquid smoke is pretty safe. But I’ll let you decide.

In a 2013 study, researchers observed the effect of liquid smoke on P53 protein activity. What is P53? It’s a protein that stimulates DNA repair. The concern here is that it is often an indicator of DNA damage.

The results of that study were shocking: Some brands of liquid smoke activated p53 nearly as much as chemotherapy drugs, which are specifically intended to cause DNA damage. (source)

But this doesn’t actually allow us to conclude that liquid smoke is harmful on balance. Many kinds of tea and coffee also stimulate a P53 response, for example, but their overall impact is thought to be positive.

So the researchers suggested instead just analyzing liquid smoke for the presence of known carcinogens.

Liquid smoke is made by passing wood fumes into a chamber where the vapor is condensed. The liquid that results from this process contains polycyclic aromatic hydrocarbons (PAHs), which are considered carcinogenic.

But how many PAHs are present in liquid smoke? Is it a dangerous amount?

Why Liquid Smoke Appears to Be Safe

The good news is that the quantity of PAHs in liquid smoke is very low.

Scientists recommend that you don’t exceed a limit of 47 ng/day of PAHs. Meanwhile, most liquid smoke contains no more than 0.8 ng to 1.1 ng per teaspoon (source). So you should be safe as long as you consume just a normal amount of it.

This may be due to the fact that PAHs are fat-soluble, while liquid smoke is water-based. So liquid smoke contains the smoke-flavor molecules without most of the harmful molecules.

With smoked meats and fish, however, the PAHs from the smoke can be absorbed right into the fat of the meat. So you get more of the harmful PAH molecules along with the smoke flavor.

It may be worth avoiding liquid smoke if you have a history of cancer. But otherwise, I wouldn’t worry about it.

As covered above, the amount of PAHs in liquid smoke is very low. And although liquid smoke spiked P53 protein activity, this does not necessarily mean that it’s harmful on balance. Personally I feel okay with consuming liquid smoke.

Overall, liquid smoke is a great product for vegans. It’s a flavor that many vegans have been missing. It’s a quick way to step up your cooking, for sure.

Some new vegans have told me that liquid smoke was the only thing that kept them sane while first going vegan (while they were still craving meat).

So go ahead and try some liquid smoke if you haven’t yet! I like the Colgin brand, but all of the brands I’ve looked at so far have been vegan.