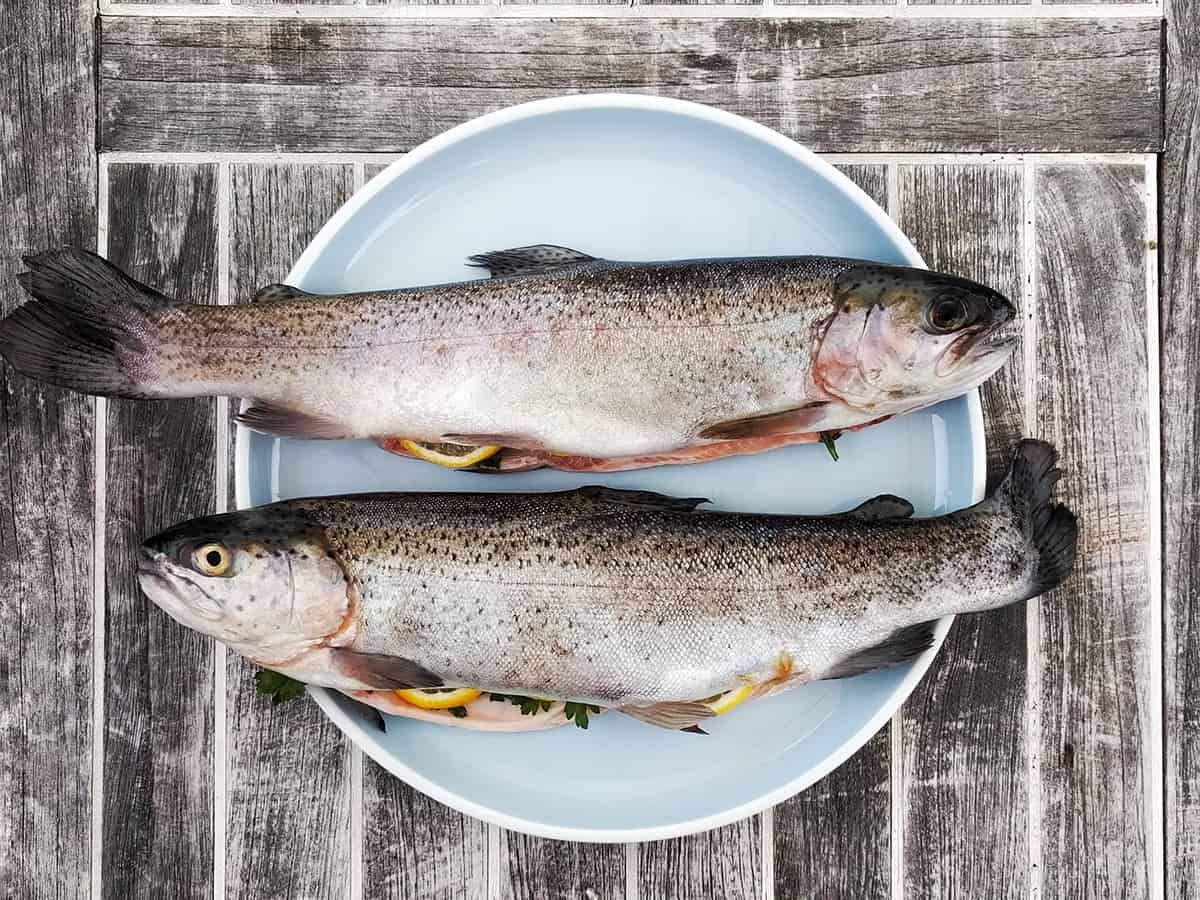 If you’re new to veganism, it can be confusing to keep track of the difference between vegans, vegetarians, pescatarians, flexitarians, and so on! One particular issue is the common confusion over whether vegans can eat fish.

So, do vegans eat fish? Vegans do not eat fish, as they do not eat any animal products. The correct term for a vegetarian who eats fish is “pescatarian.” Controversially, some vegans do eat bivalves such as oysters because they don’t have a central nervous system. Otherwise, vegans do not eat seafood or fish.

That’s the quick answer! But there’s a lot more we can dig into here. Read on to learn more about the distinction between vegans, vegetarians, and pescatarians, along with why vegans don’t eat fish, and how vegans can get the health benefits of fish (omega-3s) on their more restricted diets.

Vegan vs Vegetarian vs Pescatarian

A vegan is someone food doesn’t eat any animals or animal products—no dairy, no eggs, no meat, no fish, no animals at all. Typically, vegans also avoid wearing animal products such as leather and fur.

Some vegans may be purely motivated by health reasons, but more often, the term “vegan” is associated with people who have an ethical belief in animal rights or concern for animal welfare.

Many vegans also boycott zoos and circuses that exploit animals for entertainment, along with avoiding products tested on animals.

A vegetarian is anyone who doesn’t eat meat. Typically, vegetarians do not eat red meat, poultry, fish, or any other dead animals.

Most vegetarians do still consume dairy products and eggs. The technical term for this is lacto-ovo-vegetarian (Lacto meaning milk and ovo meaning egg), but most people just call it vegetarian.

A pescatarian is someone who is vegetarian except for fish and seafood. Pescatarians don’t eat red meat or poultry, but they will still eat fish and other seafood.

Vegan Alternatives to Fish: What to Eat Instead

There are tons of ways to replace fish in any meal or recipe to make it vegan-friendly.

If you’d like a recipe for a home-made fish alternative, you can check out this list of 17 vegan “fish” recipes from PETA (it includes pictures) or this guide to different vegan seafood substitutes.

There are also some products you can buy in the store like these fishless filets, which are a ready-made fish alternative. I also believe I’ve seen vegan fish sticks in a store once or twice.

Otherwise, you can also just replace fish with any protein-rich plant food like beans, tempeh, tofu, seitan, or any mock-meats you find at the store, like veggie burgers.

When I visit my parents, they’ll often make a fish dinner for themselves, and I’ll eat the same basic meal but with a simple veggie burger to replace the fish part. Everyone’s happy!

Vegans and vegetarians can be driven by various motivations to their diet. But typically, their reasons not to eat fish will fall into one of the following three categories:

Fish have nociceptors, a kind of neuron used to detect harm from heat, pressure, or irritation. They also produce endogenous opioids (natural painkillers) in the same way that we do.

In experimental research, when chemical irritants were applied to fish, they rubbed their bodies against the sides of the tank, lost their appetite, and showed other signs of pain.

From an ethical perspective, if you’re a vegetarian or vegan opposed to hurting and killing mammals, I don’t see a strong argument for why it would be okay to hurt or kill fish.

Add to that, the excessive cruelties of modern-day commercial fishing, where fish are often cut open alive or left to suffer for days in huge nets—and there’s a strong animal welfare case against eating fish.

Many forms of commercial fishing today result in a huge amount of bycatch—extra animals being caught that were not the intended target.

Bycatch greatly reduces the biodiversity in our oceans. It is estimated that 650,000 marine mammals (dolphins, whales, and porpoises) are injured or killed in nets intended for fish each year.

One of the more objectionable practices in modern commercial fishing is bottom trawling. Huge nets are dragged along the ocean floor, catching just about everything.

You can actually see the impact of bottom trawling from space. I couldn’t believe it when I saw this, but now it makes sense to me that bottom trawling is the ocean equivalent to clear-cutting forests.

The EPA declared that PCBs are likely to cause cancer in humans, and studies have linked them to birth defects in the children of women who consume lots of fish high in PCBs.

Since these toxins accumulate in animal fat, they become more and more concentrated as you move up the food chain.

Of course, many people consume fish for the healthy omega-3 fats. But to others, the threat of PCBs can be a strong counterpoint. Below, I’ll cover how to get omega-3 fats without the fish on a vegan diet.

Ostrovegans: Vegans Who Eat Oysters and Other Bivalves

Ostrovegans, sometimes called bivalvegans, are vegans who eat oysters and other bivalves (mussels, clams, and scallops).

The idea is that, unlike fish, bivalves like oysters are believed by many in the scientific community to actually not feel pain.

Bivalves lack a central nervous system, so although they have nerves, they don’t have brains or anything resembling it. Still, it is a controversial issue among vegans. PETA argues to still avoid eating bivalves.

I actually wrote a whole article on ostrovegans here, which goes into a lot more depth on whether bivalves feel pain and what it means for vegans.

I’m not sure how common this term is, but I have just recently heard the term “seagan” to refer to vegans who eat fish and seafood.

Seagans are different from pescatarians, then, because pescatarians still eat dairy products and eggs. Seagans eat a fully vegan diet besides the fish and seafood.

The rationale for a seagan diet is the supposed health benefits of eating fish for the omega-3 fatty acids. Here’s a seagan FAQ about it. But as I’ll cover in the next section, you can get your omega-3s from plant foods.

Getting Omega-3 Fats without Fish or Fish Oil

Many people talk about the need to eat fish for omega-3 fats, as if there are no other sources of omega-3 fats on the planet. You can still get your healthy omega-3s as a vegan.

Personally, I take a vegan DHA/EPA supplement every day, and I recommend the same to other vegans. DHA and EPA are two of the more bioavailable forms of omega-3s which non-vegans get from fish or fish oil.

Vegan DHA/EPA supplements are sourced from algae. Here is the one I’m currently using. Here is another one I’ve used in the past. (Both are good, but the one I’m using now has a bigger dose.)

You can also get omega-3 fats from food, but the forms of omega-3 found in vegan foods are not as bioavailable as the EPA and DHA. Your body has to convert it, and there is some concern over whether you can really convert it efficiently enough.

Still, you can load up with omega-3 rich vegan foods: flaxseeds, chia seeds, hemp seeds, and walnuts are some of the best sources.

Vegans do not eat fish or any other seafood. Ostrovegans and seagans provide two different exceptions to this rule if you count them as vegans (controversial!).

Luckily, there are plenty of yummy fish alternatives you can use in your cooking, and there are also ways for vegans to get healthy omega-3 fats even without consuming fish.