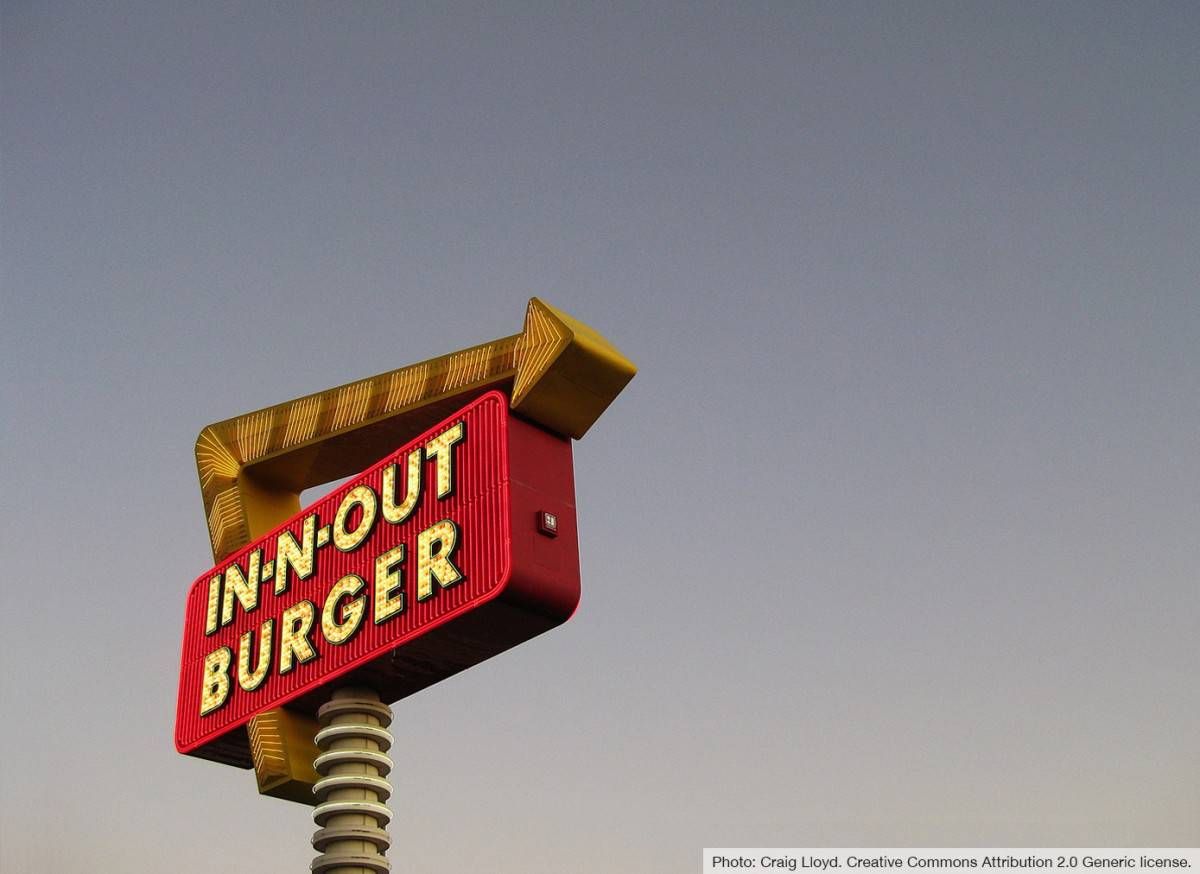 More and more burger chains are offering vegan burgers these days. But unfortunately, In-N-Out is not one of those chains. They still have no vegan burger. Actually, out of all the fast-food chains, it’s one of the worst for vegans.

Below, I’ll answer the most common questions about eating vegan at In-N-Out. I’ll also share how to make your own Vegan In-N-Out Sauce at home. And I’ll share a round-up of vegan petitions and protests against In-N-Out!

The following vegan menu was compiled with the help of the allergen information on the In-N-Out website, along with other tips from vegan bloggers and the like.

Restaurant menus frequently change and vary location, so be sure to double-check any crucial details with the staff at your In-N-Out location.

This is the only “real” vegan option on the standard In-N-Out menu besides drinks. These are pretty standard fast-food fries. They’re fried in 100% sunflower oil—not animal fat—so they’re 100% vegan.

Another bonus of the fries at In-N-Out: To my knowledge, In-N-Out doesn’t fry any animal products, so there’s not as much chance of “cross-contamination” as at other restaurants, which some pickier vegans do worry about.

Don’t go for the “Animal Style” fries from the “Not So Secret Menu,” as these contain the In-N-Out Spread, which contains egg.

In-N-Out does not have anything like the Impossible Burger, Beyond Burger, garden burger, or black bean burger. That said, some vegans out there have gotten creative and just order a bun with veggies inside.

What About In-N-Out Sauce? If you get any kind of “veggie burger” creation, make sure to also get it without In-N-Out Spread—it contains egg. You can get ketchup and mustard instead to keep it vegan.

Variations: Order fries and put the fries in the burger, too. And ask them to toast the bun!

They do have plenty of vegan drinks at In-N-Out to choose from:

You may think the following menu items would be vegan, but unfortunately, they’re not:

Does In-N-Out Have the Impossible Burger?

In-N-Out does not have the Impossible Burger or any other veggie burger patty. However, there has been some pretty funny media stories surrounding this.

Writing for The Outline in 2018, Joe Veix documented his mission to sneak 2 Impossible Burger patties into In-N-Out, so he could eat a plant-based In-N-Out Double-Double cheeseburger, in In-N-Out.

It’s a funny read, but it doesn’t actually help anyone who wants the convenience of eating a vegan burger that was actually made and sold at In-N-Out. Right now, the best you have in that regard is the above “Veggie Burger” without a patty.

Does In-N-Out Have Vegan Onion Rings?

In-N-Out Shakes are not vegan, as they all use real ice cream (milk ingredients).

Are the Buns at In-N-Out Vegan?

Does In-N-Out Thousand Island Have Dairy?

In-N-Out Spread, which is a variation on thousand island dressing, does not contain dairy. However, it does contain egg, so it’s not vegan. This information comes from the allergen menu on In-N-Out’s website—but if you have a serious allergy, you should double-check with staff.

In-N-Out’s Grilled Onions are generally considered vegan. That said, if you’re picky about cross-contamination issues, such as the onions being grilled on the same surface as meat, then you should ask at your specific In-N-Out location.

In-N-Out ketchup is vegan, as ketchup is pretty much always vegan. This is also confirmed by the allergen menu on In-N-Out’s website.

How to Make Vegan In-N-Out Spread

In-N-Out Spread is essentially a variation on thousand island dressing, so it naturally contains egg from mayonnaise. But if you want to recreate the signature taste of In-N-Out Spread in a vegan version, it’s pretty easy to do.

This recipe is based off this Mashed article, in which a chef and food scientist reverse engineers how to make In-N-Out Spread. If you take the recipe he deduced, and simply replace the mayo with vegan mayo (such as Vegenaise), you’ve got Vegan In-N-Out Spread.

The vegan movement has had a little bit of a dicey relationship with the In-N-Out chain up to this point.

In case you feel like registering your frustration with In-N-Out’s lack of veggie burger options, this petition has over 3,000 signatures asking them to add a plant-based vegan burger to their menu.

A previous petition for In-N-Out to offer a vegan burger actually had over 16,000 signatures before closing. This Washington Post article chronicled some of the public backlash against the petition. My favorite complaint was the one referring to petition signers as “soft vegan nerds.”

And that’s not all the controversy. There’s more:

I like to end my vegan restaurant guides with a look at the whole-food plant-based (WFPB) options. Is there anything for you at In-N-Out if you’re not just avoiding animal products but processed foods, too?

There are no real WFPB options at In-N-Out. You’d have to just ask for veggie toppings and nothing else… So basically a sad, make-shift salad. Not worth even getting.