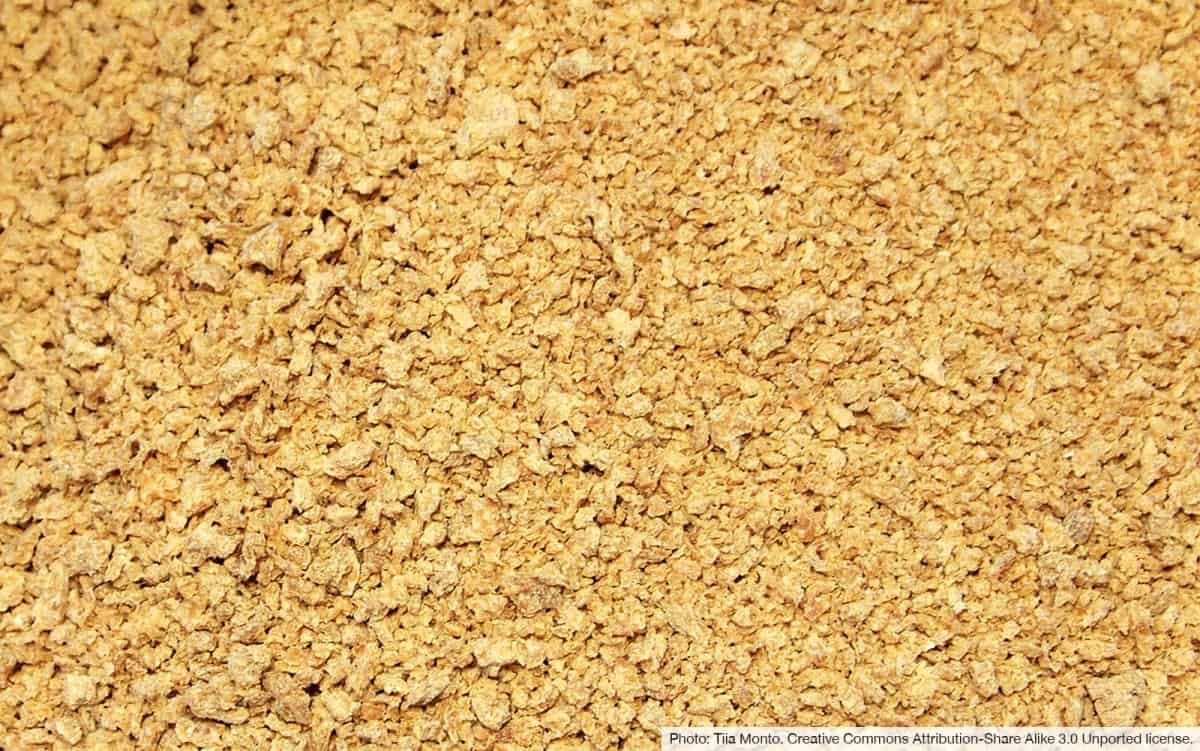 Nowadays, there are such realistic mock meats on the market. But if you want to take a look back at the original mock meat, you’ve gotta try TVP. Short for “textured vegetable protein,” TVP was the classic “vegan meat”—and it’s still used widely for stuff like vegan sloppy joes.

In this post, I’ll answer 8 common questions that people have about TVP. If you’re new to it, you’ll walk away as a much more informed consumer—ready to enjoy all that TVP has to offer!

1. Is TVP Cheaper Than Meat?

TVP is generally cheaper than meat. For years, budget-friendly shoppers have used TVP or a 50/50 mix of TVP and meat to cut costs. In addition, food companies often add TVP to cheap products like burritos and chili to save money, rather than using pure meat.

That said, obviously there are different ways to calculate what’s “cheaper.” You could calculate the cost per pound, cost per calorie, cost per gram of protein, or others. The type of meat and the brand of TVP both affect their prices, too.

I found multiple people online saying that they used to buy bulk TVP for around $1 per pound. However, it seems that current prices have gone up to about $4 per pound. This still makes TVP very economical, however.

For example, when it comes to hamburger flavor, TVP is often more than twice as economical as real meat. The author at USA Emergency Supply explains:

Does TVP need to be cooked? Or can you just munch it raw, right out of the bag? The answer may depend on just how cautious you are.

Many people say they eat TVP dry (raw) with no problems. However, there is a small risk of bacterial infection since raw TVP typically isn’t pasteurized to kill off bacteria. Therefore, rehydrating and cooking your TVP is the safest option.

This issue reminds me a lot of the question of whether hummus is safe to eat after being left out overnight. Basically, you can find dozens of people saying they’ve done it and it’s fine… but the official sources advise against it.

Specifically, some people say they like eating it raw as cold cereal or granola. Others do like eating it directly out of the bag by hand—like chips.

In this case with TVP, a staff member from Bob’s Red Mill (one of the leading brands for TVP) had this to say about whether you can eat it “raw”:

“You can eat TVP raw if you prefer but we don’t suggest it because it has not gone through a pasteurization or heating process at our facility to eliminate bacteria. It also can cause an upset stomach if eaten raw as it may be difficult to digest this way. We suggest re hydrating it with boiling water, or cooking it some other way before using.” (source)

Update: Since writing this blog post, I started eating TVP dry/raw myself. So far, it’s been about 1 month of eating it regularly as cold cereal. The taste is not amazing, but I’m getting a bunch of extra protein, and so far, I haven’t gotten sick or anything.

How long can you store TVP? Well, it depends a little on how well you store it—but in any case, it can last a very long time. Let’s talk specifics.

Take note that if you’re really trying to store TVP for the long, long term, you may want to use oxygen absorbers like these. Dry TVP does not require refrigeration.

Also, note that flavored TVP-based products may not have as long of a shelf-life as basic unflavored TVP. Sometimes the other ingredients added will reduce the shelf life. Check the product for an expiration date or “best by” date.

4. How Long Is Cooked TVP Good For?

Since the rehydration process does take a few minutes, you may choose to make a big batch of TVP each time. Having rehydrated, cooked TVP in the fridge makes it easy to sprinkle on dishes throughout the week for a protein boost.

TVP can be reheated as many times as needed. As noted above, cooked TVP can be stored in the fridge or freezer. Interestingly, frozen TVP doesn’t typically take much longer to reheat than refrigerated TVP.

TVP is not the same thing as tofu. They are both soy products used as meat substitutes, but TVP is more processed. TVP is made from “defatted” soy flour, while tofu is just made from coagulated soymilk, with the natural fat still included.

Since whole foods are generally considered healthier than processed foods, many people would judge tofu to be “healthier” than TVP. However, TVP remains high in fiber despite being more “processed.” And it has other nutritional benefits, too.

TVP also has other benefits in being very cheap, shelf-stable, and offers a different texture. So it may be convenient in certain cases where tofu simply wouldn’t fit the bill.

Along with TVP, you may have seen something called TSP (Textured Soy Protein). Since TVP is already made of soy, this might be confusing.

TVP and TSP are not exactly the same thing. TVP is made using hexane to extract the soybean oil from the soy flour. TSP is made using a water-based process.

Should you buy TSP rather than TVP? Honestly, it seems like it might be a little healthier, without any hexane residue to worry about. However, TSP may also be more expensive or harder to find. TVP seems to be the more popular product, by far.

TVP causes gas for some people at first, due to the high amount of fiber. If you’re struggling with gas from TVP (or other plant-based foods), check out my blog post about how to reduce vegan farting.

Here are some quick tips to reduce gas from TVP: