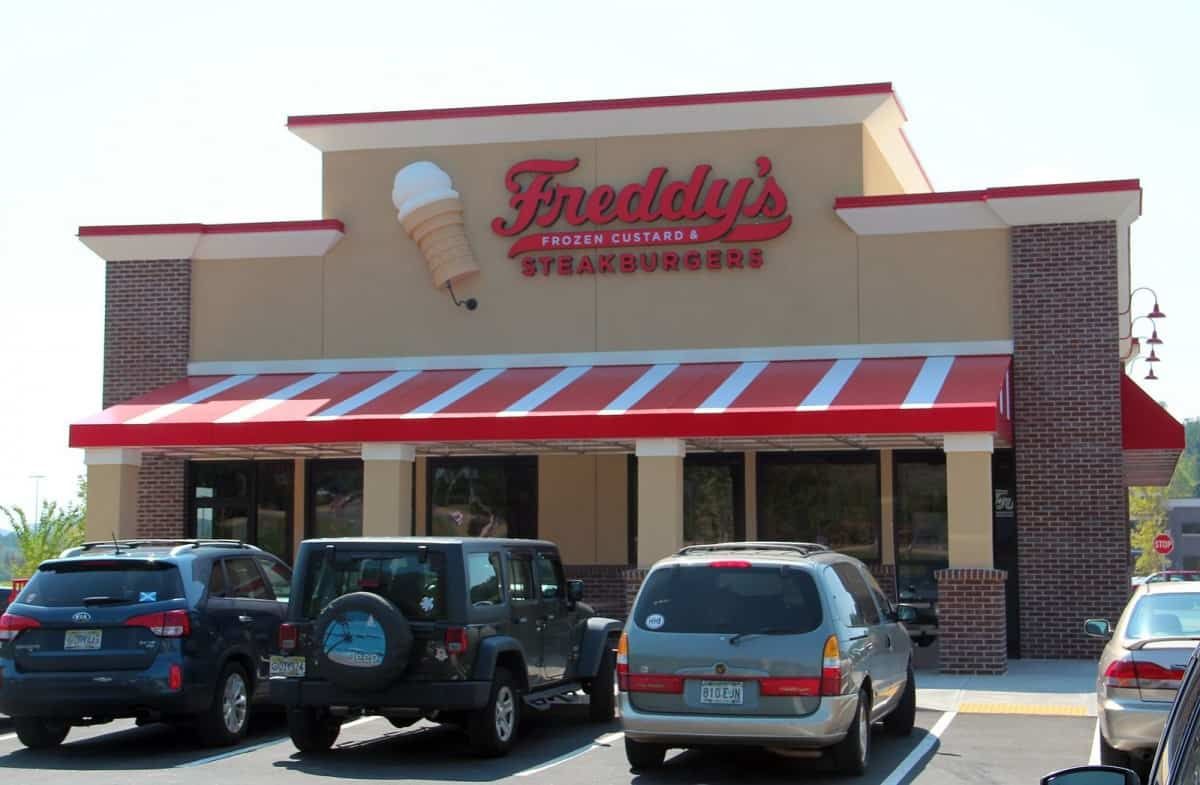 Freddy’s only offers a few vegan options—but when one of those options is a vegan black bean burger, things could be worse, right? Overall, it’s not a bad place to go as a vegan, even though it has the words “Frozen Custard & Steakburgers” in the restaurant name!

Below, I’ll share more details on how to order these items vegan. I’ll also share a few menu items that are surprisingly NOT vegan. I’ll end with a look at whether there are really any whole-food plant-based (WFPB) options or not.

This vegan menu was compiled with the help of the normal menu, allergen menu, and nutritional information on the Freddy’s Frozen Custard & Steakburgers website.

Restaurant menus change and often vary by location. I recommend double checking any important information with staff at your local Freddy’s!

1. Veggie Burger (Without Cheese or Sauce)

Yes, Freddy’s has a veggie burger! It’s actually a black bean burger, and the patty is vegan. That said, the standard way it’s prepared is not vegan. Here’s how the Freddy’s website describes the Veggie Burger:

So, you’ll want to order this veggie burger without the cheese and Thousand Island (which contains egg).

Can you keep the normal toasted bun? Yes, the standard hamburger bun at Freddy’s is vegan. In fact, you’ve got all the following options for vegan “buns” at Freddy’s:

Freddy’s Allergen Menu specifically mentions that their fries are cooked in same fryer as their chicken strips and onion rings (which contain whey).

This is extremely common at restaurants and doesn’t surprise me at all. However, if you’re very picky about cross-contamination issues like this, then you may want to avoid the fries or ask about the fryers at your local Freddy’s.

I actually wrote a whole separate post about Baked Lay’s, and I can tell you the original flavor is definitely vegan. That said, BBQ Baked Lay’s are not vegan, as they contain natural flavors that are sourced from chicken and milk. So if you see BBQ Baked Lay’s, steer clear!

This is just a little container of Mott’s Natural Applesauce. Not very exciting or filling, but it’s a nice little vegan extra to add to your meal.

First, here are some sauces and condiments you can use with your fries and veggie burger:

Here are some extra toppings for your burger, fries, or other savory dishes:

Now, the following extras are typically offered with frozen custard. Fnfortunately, there’s no vegan frozen custard at Freddy’s—yet. However, you can potentially just ask for some of these extras in a bowl together. Really, if you combine a few, it could be pretty delicious:

Also, I didn’t know exactly where to list this, but the crackers they have as an extra for the chili are supposedly vegan.

You might think that some of the following options would also be vegan, but unfortunately, they are not:

Now let’s answer some common questions about what is vegan at Freddy’s.

Freddy’s Veggie Burger patty is vegan, but it comes standard with a slice of cheese and a sauce that contains egg (Thousand Island Dressing). Therefore, to make it fully vegan, you need to order it without cheese and sauce.

Freddy’s Veggie Burger is not a Beyond Burger or Impossible Burger. Rather, it is a black bean burger. (source)

Does Freddy’s Have Dairy-Free Custard?

Freddy’s does not have dairy-free custard. If you look at Freddy’s Allergen Menu, every flavor listed under “Custard Treats,” “Sundaes,” and “Concretes” contains milk.

Does Freddy’s Custard Have Eggs?

What Does Freddy’s Fry Their Fries In?

Freddy’s cooks their Fries in soybean oil. To be specific, their Allergen Menu says, “all of our fried items are cooked in the same highly refined soybean oil.” (source)

This is pretty standard and not surprising. After reviewing the vegan options at 70+ chain restaurants, I can tell you that French Fries are almost always vegan. There are a few famous examples of non-vegan fries, like McDonald’s and Buffalo Wild Wings—but the standard is definitely vegan fries.

What if you’re not just vegan but also trying to avoid all processed foods? Can you actually get a whole-food plant-based (WFPB) meal at Freddy’s? Let’s take a look at that.

As you can see, these are not “normal” things you would build a meal around. So you’re mostly going to go hungry if you want to just show up to Freddy’s and try to get a strictly WFPB meal.