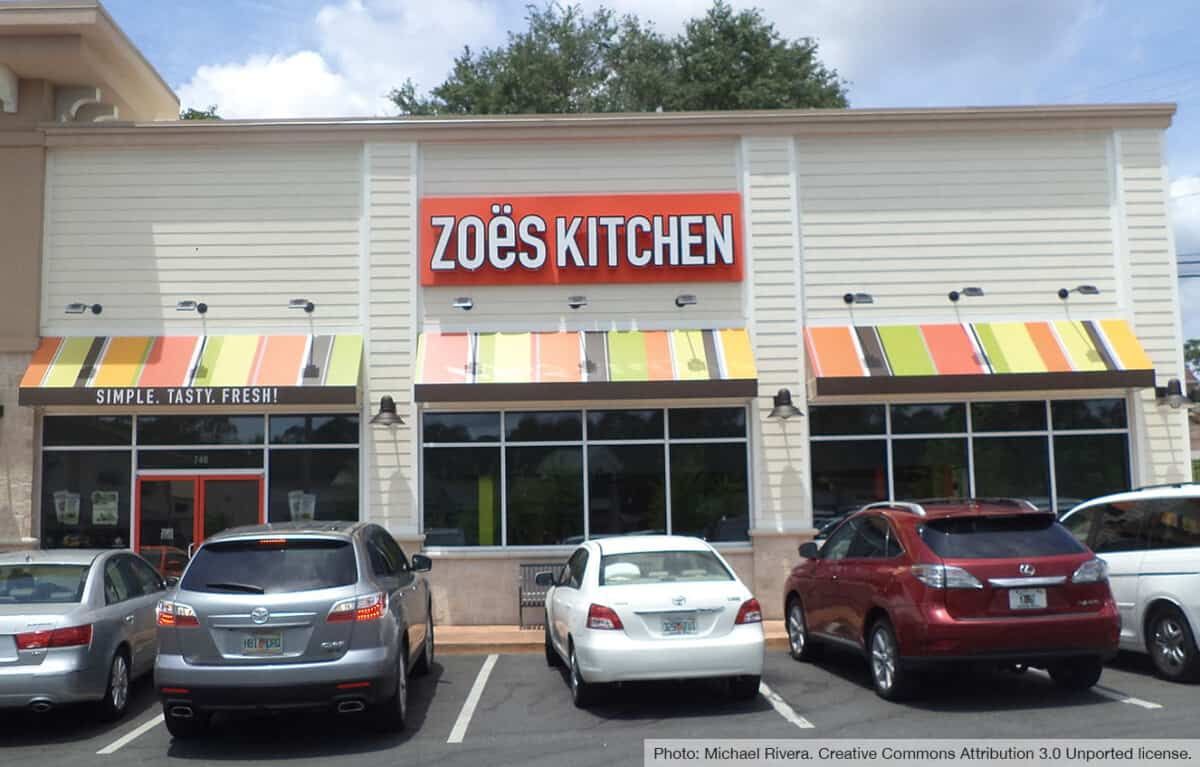 Mediterranean restaurants are pretty good for vegans. As a vegan of 14 years now, I’ll often vote to eat at falafel places with family and friends. And Zoe’s Kitchen holds up as a great example of this vegan-friendliness.

More details on all these below, including the options for building your own bowl and customizing your salad. I’ll also cover some controversy about Zoe’s falafel, pit chips, and quinoa: Are they vegan?

To build this vegan menu, first I reached out to Zoe’s and got a full list of vegan options from them. Then I crossed checked it with their website and allergen menu. Then I followed up with them about any conflicting details.

So the following menu is solidly vetted as vegan. That said, it never hurts to ask for confirmation with your server on any details you need help with.

Would it really be a trip to a Mediterranean restaurant if you didn’t get hummus? Luckily both the classic and the spicy versions are vegan.

You can get a pretty awesome vegan salad at Zoe’s. None of the default options are vegan, however, so you just need to adjust some details.

Zoe’s has a bunch of vegan sides, and these are more substantial than the options at most other chain restaurants, too. Really you could fill up on sides easily:

6. Build Your Own Bowl

The “build your own bowl” option is perfect for us vegans. Zoe’s has a ton of vegan options on hand that you can build into a full meal in one bowl.

Here are some of the grain and bean options to build your bowl around:

A bunch of the pre-made bowls come with cucumber and dill. If you want to focus even more on veggies, you can have them add greens or roasted veggies (or get those as a side). You can also choose any of the toppings and sauces in the next section.

Just make sure your bowl excludes feta and Tzatziki. Those are the common non-vegan bowl components. I’m also waiting to hear back about the quinoa, which supposedly contains milk according to Zoe’s allergen guide.

Add these to your bowls or salads:

You may assume the following items would be vegan, but they’re actually not:

Zoe’s Kitchen falafel is vegan when ordered alone. However, it typically comes with Tzatziki sauce, which is not vegan. So be sure to order it without Tzatziki sauce.

Zoe’s Kitchen rice is vegan, as confirmed by their allergen menu and an email I received from a Zoe’s rep.

Zoe’s Kitchen hummus is vegan, as confirmed by their allergen menu and an email I received from a Zoe’s rep.

What if you’re not just trying to eat vegan at Zoe’s but also whole-food plant-based (WFPB)? Can you fill up as a vegan while avoiding fried and processed foods, too?

Here’s what I’d eat for a WFPB meal at Zoe’s:

There are a lot of other dishes that may qualify, too. For example:

Another thing to consider is that, from what I’ve heard, Zoe’s leans toward using olive oil in the kitchen. So it may not mess with you as much as an omega-6 rich vegetable oil or something.

Extra virgin olive oil is probably the healthiest oil, as I cover in my post about the 6 reasons why oil can be bad for you. But I’d still avoid it if trying to reverse heart disease or something.