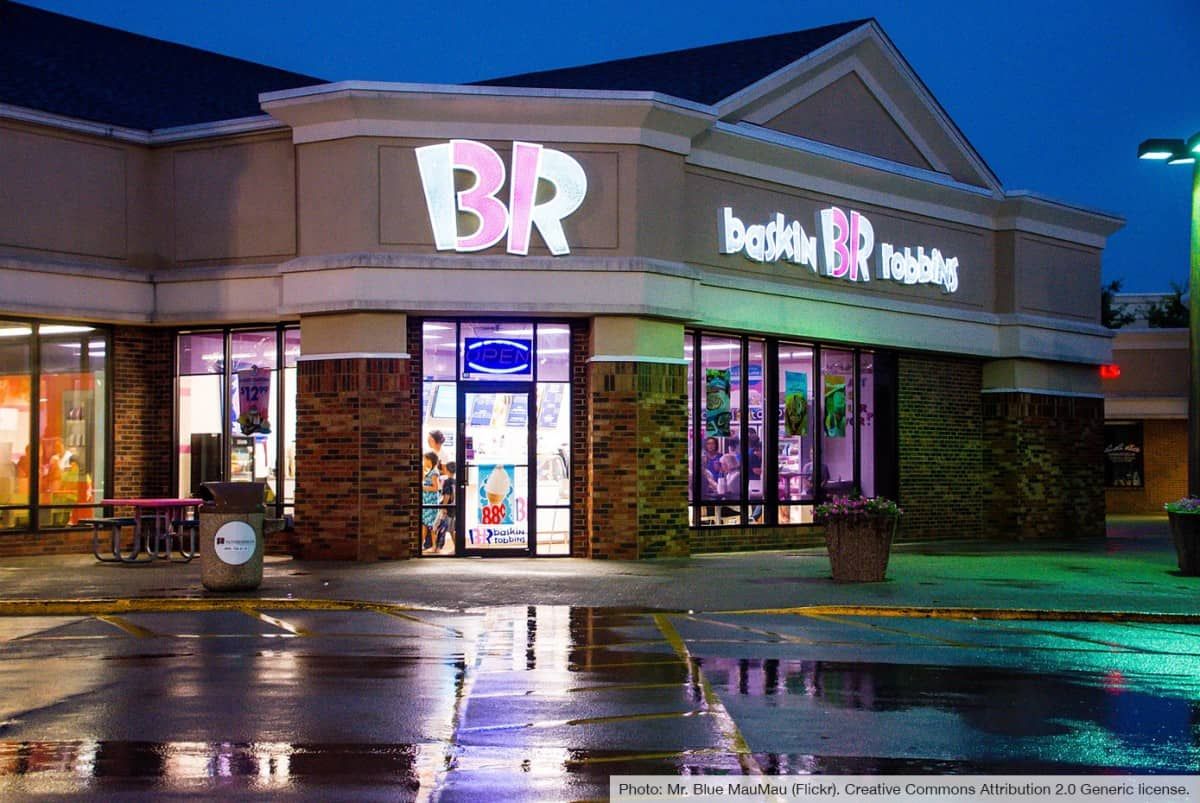 Baskin Robbins is the biggest ice cream chain in the world. And thanks to growing demand, in August 2019 they finally launched two vegan ice cream flavors. Then a few months later, they added another. Now we’ve got choices!

Read on to learn which items are surprisingly NOT vegan. I’ll also answer some common questions about their smoothies and cones. Then I’ll end with a crazy story about how the heir to the Baskin Robbins empire went vegan and rejected his role in the company!

The following vegan menu was made with ingredients lists on the Baskin Robbins website, as well as other reports from vegan bloggers and news outlets.

Restaurant menus often change and vary by location. I recommend double-checking any important information with staff at your Baskin Robbins location.

These vegan ice creams are made with an “coconut oil and almond butter base”:

Note: If you see Miami Vice Sorbet, that should also be vegan. But I wouldn’t count on it being offered.

These are a solid vegan offering that Baskin Robbins has had for years before getting actual vegan ice cream:

Note: The Horchata Ice flavor (seasonal) is likely also vegan based on what sources say.

There’s only one main vegan cone at BR:

If you see chocolate dipped Cake Cones with sprinkles (“Fancy Cake Cones”), those should be vegan, too. The chocolate coating does not contain dairy.

The exact toppings will vary by location. But here are some of the vegan toppings they should have:

Since Dunkin’ Brands owns Baskin Robbins, most locations also offer Dunkin’ coffee. And these are all vegan:

Now let’s answer some common questions about how to eat vegan at Baskin Robbins.

Baskin Robbins smoothies are not typically vegan, as they contain dairy in the form of yogurt. However, you may be able to order them without yogurt by request.

Baskin Robbins Rainbow Sherbet is not vegan, as it contains dairy ingredients. Specifically, it contains nonfat milk, cream, and whey.

How Many Calories Does Baskin Robbins Vegan Ice Cream Have Per Scoop?

What Is In Baskin Robbins Vegan Ice Cream?

Baskin Robbins vegan ice cream is made from a refined coconut oil and almond butter base, with a lot of sugar and other sweeteners and flavorings added.

Usually in my restaurant guides, I like to include a section on whole-food plant-based (WFPB) options. That is, options without animal products or processed foods. But in this case, it’s really just about nothing.

Pretty much everything in Baskin Robbins is loaded with processed sugar. Even if you just got a plain dry ice cream cone, it’s made of processed white wheat flour—not WFPB.

Really just the coffee would be WFPB. And assuming they serve water, that would be, too!

This is a pretty crazy story that I just had to mention in this post.

Did you know: The only son of Baskin Robbins’ co-founder Irvine Robbins, after growing up with an ice-cream-cone-shaped swimming pool, actually ended up rejecting his role in continuing the company? (source)

John Robbins grew up with a lucrative path laid out in front of him, where he would take over Baskin Robbins from his dad.

But as he grew up, he learned more and more about the health issues with ice cream, as well as the abuse of cows on dairy farms. And when he reached adulthood, he decided to go live in a cabin with his wife—living off just $500 a month.

He ended up writing a book in 1987 called Diet for a New America—maybe you’ve heard of it? And he started the Food Revolution Network (and wrote a bunch more books). He now teaches people around the world how to eat a plant-based diet.

So yes, the supposed-to-be heir to the Baskin Robbins fortune actually went vegan and rejected the whole thing!