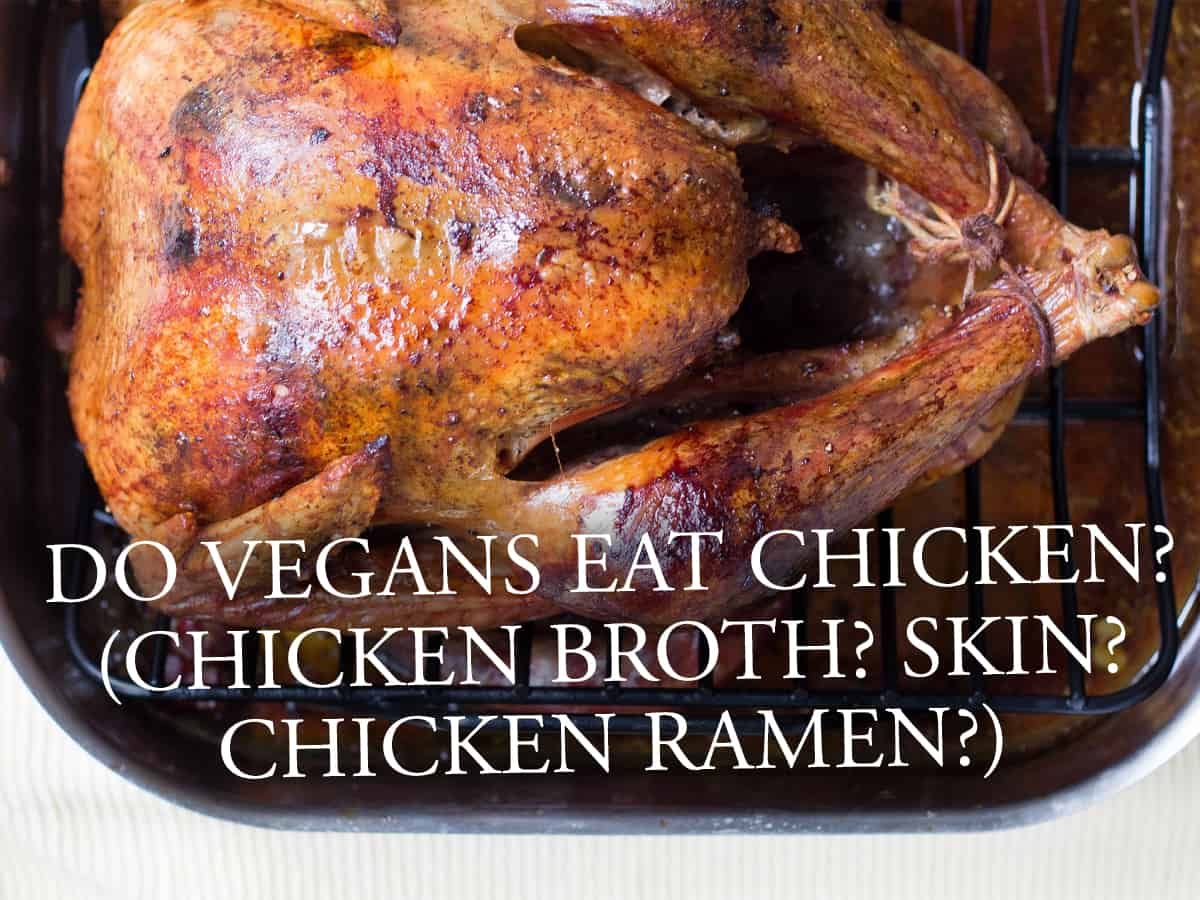 In my twelve years as a vegan, I’ve heard a lot of funny questions from people about veganism. One of my favorite questions is when people ask whether vegans can eat chicken. It seems like the answer should be obvious, but it’s actually a common question.

In this article, I’ll explain why vegans don’t eat chicken and why the confusion exists in the first place. And then I’ll address why the answer is the same for chicken broth, chicken skin, chicken noodle soup, and other specific products.

Vegans can be driven by a number of different moral philosophies, but usually, there is an ethical objection to the treatment of animals as property or the killing of animals.

In line with this, most vegans object to eating chicken due to the treatment of chickens on factory farms and at industrial slaughterhouses. Chickens on modern industrial factory farms are often kept in small cages or crowded by the thousands into dirty sheds.

Chickens are bred, fed, and raised in such a way to grow large as fast as possible. This leads to some concern about whether this is healthy for the birds.

Some vegans adopt their diet solely for health reasons. But even those vegans typically do not eat chicken.

While chicken is considered healthier than most red meats and is relied upon by many people as a “healthy” protein source, it still can be quite unhealthy.

Chicken that you can buy at the store tends to be pumped full of salt water to increase the weight (chicken is sold by weight). This makes chicken one of the highest sources of sodium in the American diet.

Eating chicken is also the most common source of Salmonella poisoning. It’s very common for chicken at the grocery store to be contaminated with fecal matter and bacteria that can potentially make people sick.

White meat also appears to significantly increase your risk of colon cancer and contributes to the risk of overweight and obesity. So even “health vegans” and “flexible vegans” tend not to go for chicken as a regular meal.

I read an article online once making the argument that vegans should be okay with chicken broth because only 5% of it is actually from chickens, and it’s rude to reject food that other people make for you.

Let me just say this: You can refuse to eat any food you want. Your body is yours. Your diet is yours. If you don’t want someone to feed you dead animals or products taken from animals’ bodies, you shouldn’t be guilted into eating that food.

I wrote another article on this blog about how to reject non-vegan food politely. Try to use those methods. But don’t feel like you have to eat chicken broth or any other animal products if you’re vegan.

Find a good vegan vegetable stock to use instead of chicken stock. The vegan “Better Than Bouillion” is what I usually use as the base for my soups. I love it because it’s small and lasts a long time in my fridge (click to check the current price on Amazon).

More Questions about vegans and chicken

When I was putting this article together, I was looking around to see what other questions people had about vegans and chickens. And there were quite a few related questions.

Vegans just don’t eat animal products. So you just need to identify if the ramen noodles or seasoning contain animal products or not. Then you will know if vegans are okay with eating it.

Vegans can eat artificial chicken flavor as long as it doesn’t contain any animal products. Many vegan products exist that attempt to simulate the taste and texture of chicken. These are enjoyed widely by vegetarians and vegans.

If you’re looking for a vegan alternative to chicken noodle soup, you can buy “No Chicken Noodle Soup” by Amy’s. It’s a delicious soup! I’m a fan of it.

Why Is There Confusion Over Whether Vegans Eat Chicken?

The confusion about whether vegans eat chicken stems from the fact that some people who stop eating red meat still continue to eat chicken, fish, and other white meat. Some people don’t even think of chicken and other poultry as meat.

I always considered chicken to be a type of meat, and it always seemed obvious that vegans wouldn’t eat chicken. But believe it or not, I’ve actually gotten the question several times, “Do you eat chicken as a vegan?”

But chicken is not vegan. Period. And I would say that the answer is just as straightforward when it comes to chicken broth, chicken skin, and these other questions. I understand the broth and the skin seem to be more “minor ingredients”—but the source is just as clearly from an animal.

Vegan chicken nuggets, vegan chicken patties, and even vegan fried chicken are available today in mock meat versions. This can be a great vegan alternative.

Usually “vegan chicken” is made from soy protein or seitan (wheat protein).

These “mock meat” products make it easy and convenient for people to transition to a vegan diet because the foods look and taste just like real chicken that people are already accustomed to eating.

“Vegan chicken” mock meats are generally regarded as some of the most realistic vegan mock meats available. So, if you’re a vegan and you miss eating chicken, you should check out some of these products!