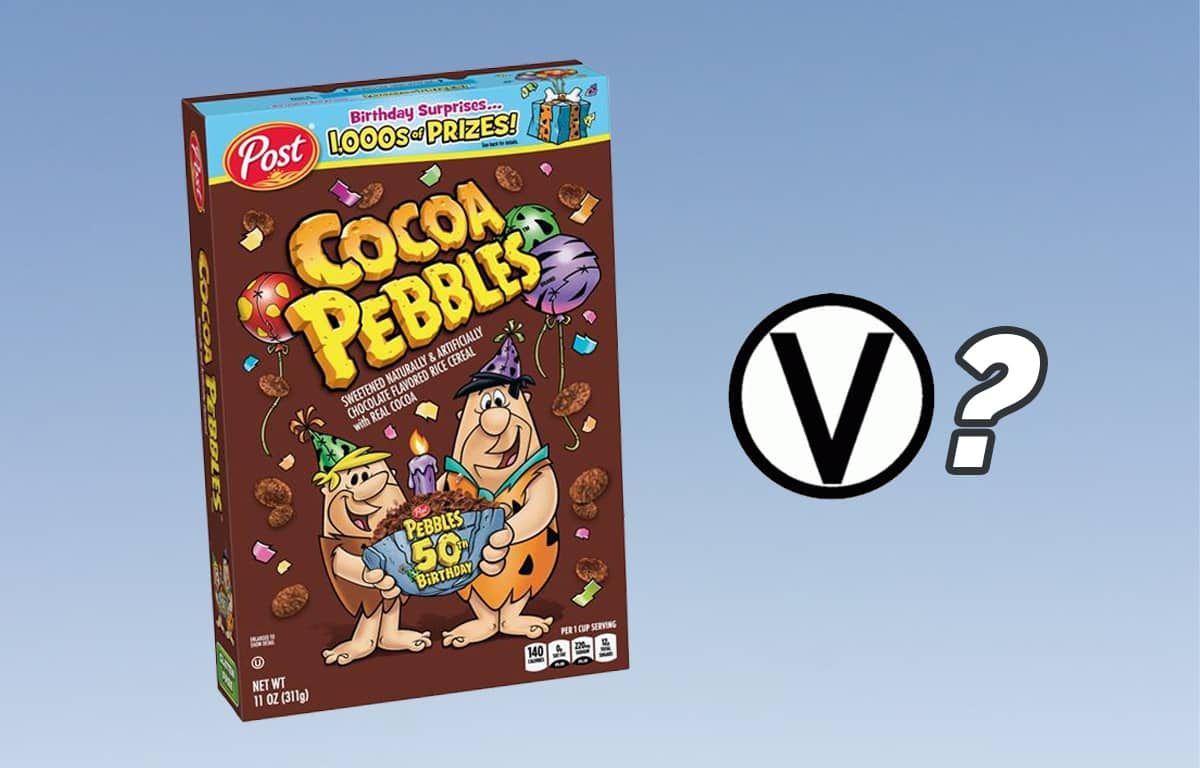 Chocolate is great. Cereal is great. And yet, somehow chocolate cereal manages to be even greater than the sum of its parts. Cocoa Pebbles is one of the classic chocolate cereals on the market today. Is it vegan-friendly?

Cocoa Pebbles are generally considered vegan. However, they do contain sugar, natural flavor, and vitamin D3, which are gray-area ingredients that some vegans avoid.

Below I’ll explain why each of these ingredients are so controversial to some vegans—and why I and many other vegans choose to go ahead and eat them anyway! I’ll also look at cocoa and chocolate as a whole, and whether Cocoa Pebbles Crisps are vegan.

What Are Cocoa Pebbles Made Out Of?

First let’s look at the ingredients list for Cocoa Pebbles. I’ve bolded three ingredients in red which some vegans avoid:

Now let’s take a look at each of these controversial ingredients:

My personal view is that cereal companies like Post will probably not even notice if you boycott their cereals for these kinds of minor ingredients, or for ingredients that merely could be sourced from animals.

If you do want to boycott these animal by-product ingredients, I recommend you at least email the companies to voice your concern that way, too. I just don’t think they will get the message otherwise.

Do Cocoa Pebbles Have Dairy?

Cocoa Pebbles do not contain milk, lactose, or any other dairy. In fact, there doesn’t even seem to be an allergen warning on the package for “traces of milk” or “may contain milk”—so it should be safe even for people with milk allergies or lactose intolerance.

Do Cocoa Pebbles Have Eggs?

Cocoa Pebbles do not contain eggs. In fact, I can’t even think of one breakfast cereal that contains eggs. Probably there is one somewhere out there, but it’s extremely uncommon if so. Eggs are not generally an issue in cereal.

Do Cocoa Pebbles Have Gelatin?

Cocoa Pebbles do not contain gelatin. Typically, you’ll only see gelatin in cereal when there are marshmallows (like in Lucky Charms) or, in some cases, to hold frosting onto the cereal (like in Frosted Mini-Wheats).

Are Chocolate and Cocoa Powder Vegan?

Looking at whether Cocoa Pebbles are vegan can lead to a broader question about chocolate. Since one of the most common forms of chocolate is milk chocolate, many people mistakenly assume that chocolate itself is not vegan.

As I’ve written in a separate post, cocoa powder is generally considered vegan. Dark chocolate products, as well as things like chocolate cereal, are often vegan.

The only real issue with cocoa from a vegan perspective would be the ethical issues with slave labor in certain parts of the world. Read here for more about that.

Cocoa Pebbles Crisps are generally considered vegan. However, they do contain sugar and natural flavor, which are gray-area ingredients that some vegans avoid.

If you’ve never had them, Cocoa Pebbles Crisps are like chocolate rice chips. Pretty tasty. If you consider Cocoa Pebbles vegan, then the Crisps are definitely vegan, too, as they contain one less gray-area ingredient, and no new ones.

I’ve been writing a bunch of guides about which popular cereals are vegan. Here are a few more that may interest you: