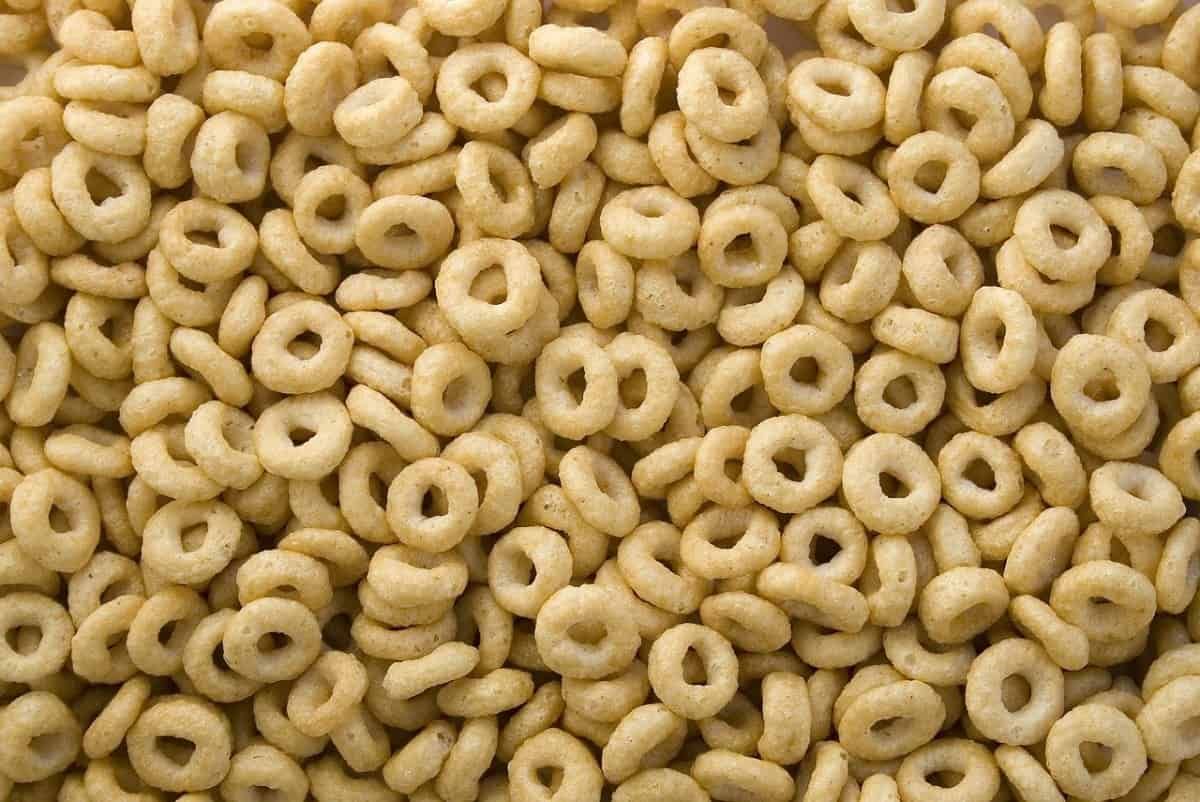 Cheerios are a funny cereal. The box boldly claims that it will lower your cholesterol—meanwhile, it’s still a processed food containing sugar and other curious ingredients. But today, we’re looking specifically at whether Cheerios are vegan.

Cheerios are not strictly vegan. They contain vitamin D sourced from sheep’s wool, plus sugar likely filtered with bone char. Flavors like Honey Nut Cheerios also contain honey, which is not typically considered vegan. However, some vegans are okay with these minor ingredients and eat Cheerios anyway.

Below, I’ve made a table of every Cheerios flavor and the controversial “non-vegan” ingredients they each contain. After that, we’ll take a look at each of these “minor” ingredients and why they are each debated in the vegan community.

Which Cheerios Flavors Are Vegan?

You may only be familiar with Original Cheerios, Honey Nut Cheerios, and Multi Grain Cheerios. But there are actually over 20 different flavors. Some are rare—but usually you can find a few in big grocery stores.

I went through the ingredients lists for all the current Cheerios cereal flavors, and I took note of any ingredients commonly of concern to vegans. Here’s what I found:

As you can see, the most consistent ingredients of concern are vitamin D3 and sugar. And so, for a vegan like me, who doesn’t boycott those ingredients, there’s just four cereals that contain honey.

Here is the list of the four Cheerios flavors that currently contain honey:

Again, this is the list of Cheerios flavors that I personally avoid as a vegan.

I put “non-vegan” in quotation marks here for a reason. It’s because there is quite a bit of debate amongst vegans about this ingredients.

My personal view is in between: I’d say that all but four flavors of Cheerios are “vegan enough” for me. But enough beating around the bush—let’s discuss these controversial ingredients.

Honey is made by bees. Bees are insects. Insects are animals. So honey is an animal product, of course. And vegans don’t eat animal products, right?

Well, not usually. But there’s some debate about honey. Why?

First off, it’s not clear how much bees experience consciousness, pain, or suffering. Vegans debate about whether it’s scientifically likely that bees are capable of “suffering” in an ethically relevant sense.

But that’s not the only issue. There’s also a more pragmatic one: Does boycotting honey make veganism less accessible as a movement?

There’s a famous article written by Dr. Michael Greger, author of my favorite vegan nutrition book, on this issue. He argues that vegans’ avoidance of honey hurts the movement—and makes vegans look crazy.

This article was written way back in 2005 in Satya. But it’s just as relevant to the honey debate today. Here’s an excerpt:

Slowly but surely the horror dawns on them. You start to see them struggling internally. How can they pet their dog with one hand and stab a piece of pig with the other? They love animals, but they eat animals. Then, just when their conscience seems to be winning out, they learn that we don’t eat honey. And you can see the conflict drain away with an almost visible sigh. They finally think they understand what this whole “vegan” thing is all about. You’re not vegan because you’re trying to be kind or compassionate—you’re just crazy! They smile. They point. You almost had me going for a second, they chuckle. Whew, that was a close one. They almost had to seriously think about the issues. They may have just been considering boycotting eggs, arguably the most concentrated form of animal cruelty, and then the thought hits them that you’re standing up for insect rights. Maybe they imagine us putting out little thimble-sized bowls of food for the cockroaches every night.” (source)

So, should we avoid Honey Nut Cheerios because of bee exploitation? Or just go ahead and eat it? It’s up to you.

Personally, I still avoid honey as a vegan. It feels like theft from the bees who worked so hard to make it. Let them keep their sweet, sweet nectar, I say. But you may disagree!

Vitamin D3 can be sourced from animals or plants. But when it’s fortified in products like cereal, the assumption is that it’s coming from lanolin—an ingredient that comes from sheep’s wool. So it’s not typically vegan.

That said, some vegans (including myself) would argue that it’s really not a big deal. The vitamin D is present in such small amounts. Does it even make a difference?

If you want to avoid fortified vitamin D3 as a vegan, I understand. But I’d encourage you to actually call or email the company and let them know why you’re avoiding the product. Because they probably won’t notice otherwise.

For a longer discussion of this issue, see my post “Is the Vitamin D in Cereal Vegan? And Does It Matter?”

Bone char from cattle is often used to filter processed sugar (to make it whiter). So some vegans avoid refined sugar where this is likely. But the challenge with avoiding “bone char sugar” is that it’s not labeled as such on the package.

So, should you avoid the sugar in Cheerios? Personally, I wouldn’t worry about it—but it’s up to you.

So… Are Cheerios Vegan?

It depends how you define “vegan.” Sorry to be difficult like that, but Cheerios are a perfect example of how the lines can be a bit blurred in veganism.