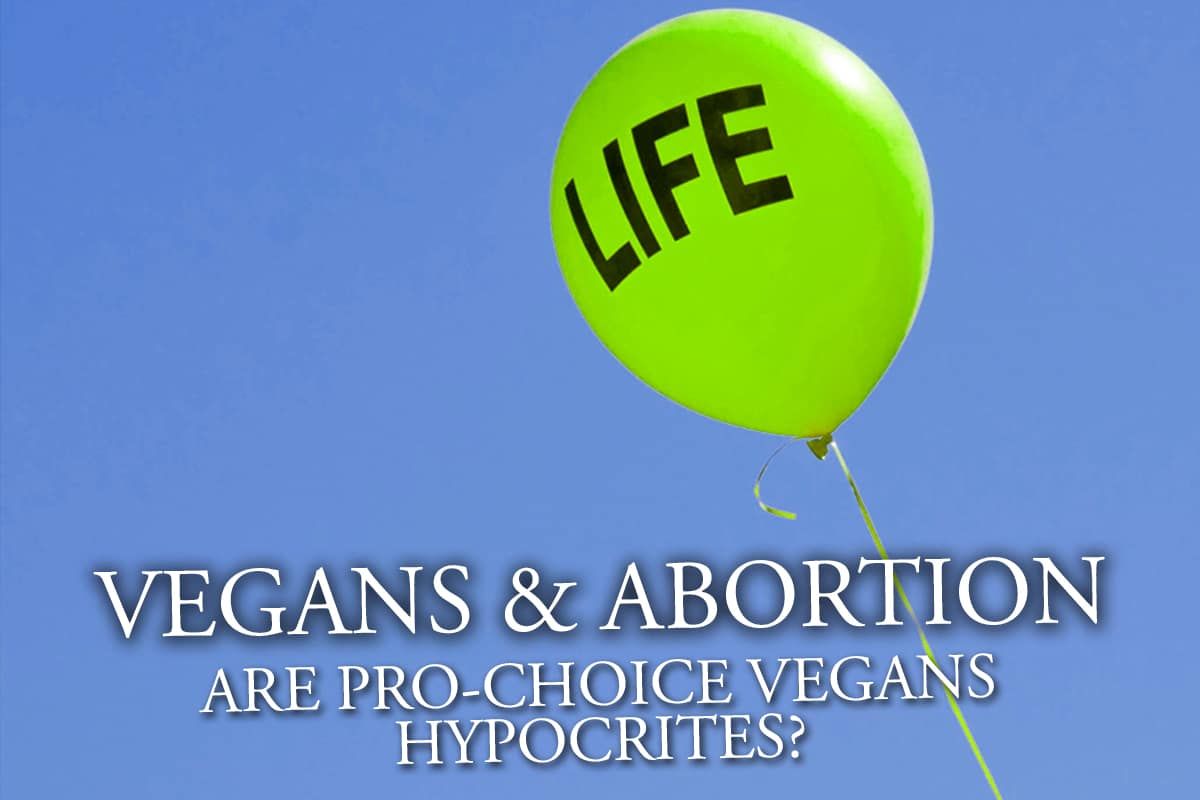 Does being vegan have anything to do with whether you’re pro-choice or pro-life? After all, vegans refrain from killing animals—wouldn’t they also want to refrain from killing a potential human as a fetus? Personally, I’ve historically been pro-choice, but I see both sides of the issue. I decided to research what most vegans think.

So, do vegans support abortion? Vegans don’t agree on abortion. Many vegans are pro-choice, but others view that as hypocritical. Vegan views on abortion often hinge on whether fetuses feel pain when aborted, and it’s commonly believed that they don’t. But other perspectives complicate this.

Arguments made by vegans for abortion rights are usually based on the following ideas:

In practice, most vegans I know are pro-choice. This may be because the majority of vegans tend to fall on the progressive side of the political spectrum overall. But this actually varies a lot, and there are plenty of pro-life and conservative vegans, as I’ll cover below.

You might notice that these pro-choice arguments rest on premises that not all vegans would agree with.

One of the main philosophical views behind contemporary animal welfare and animal rights is Peter Singer’s utilitarian philosophy, as explained in his classic book Animal Liberation. Singer’s view is based on reducing the suffering of sentient beings in the world. So it does support asking whether a fetus feels pain.

In fact, Peter Singer himself is pro-choice, and he holds a more extreme pro-choice view than the average feminist. Singer actually believes that infanticide, the killing of newborn babies, is also permissible in certain cases, particularly when the newborn has significant disabilities.

Singer’s view on abortion is based on the idea that newborns lack the cognitive capacities to hold preferences about whether they stay alive.

The fact that Singer’s ideas have led him to take a stance like supporting involuntary euthanasia for certain disabled infants is proof enough for some people that they are bad ideas. It feels wrong and potentially dangerous—it’s a form of eugenics that could be a slippery slope to even worse.

Is There More “Wrong” with Killing Than Just Causing Pain?

If pain is really the important issue in abortion and in veganism, we should be able to develop hypothetical questions that support that viewpoint.

So what if someone killed me in my sleep tonight, painlessly? Would that be okay? I guess that would still cause pain because my family members would miss me. So let’s find another example.

What if we went to the woods, found a pack of wolves, and we somehow killed all of them painlessly in their sleep? They wouldn’t feel it, and they wouldn’t miss each other because they’re all dead. No humans would miss them because they’re wild wolves in a far-away forest. And let’s just say hypothetically that it wouldn’t disturb the ecosystem in any negative way to remove them.

Is it still wrong to painlessly kill this pack of wolves?

To me, it maybe feels less wrong than slaughtering them in a painful way… but it still feels wrong. There’s some sense I have that they have a right to their lives and to continue their experience. Why should I have the right to end it for them? It just doesn’t feel right. And I guess that’s one reason why I’m vegan.

But do human fetuses have that same right? At what point do they acquire this right to have their (potential) lives?

Does it matter that the wolves had conscious preferences to keep their life before they were killed, and so a fetus doesn’t have this right-to-life until they develop conscious preferences? If so, doesn’t this bring us back to Peter Singer’s conclusion of supporting infanticide, which a lot of people instinctively disagree with?

A common slogan for the pro-choice movement is, “My body, my choice.” And some vegan feminists draw comparisons between the dairy industry and the issue of reproductive justice for humans, saying that both are about bodily autonomy and consent.

(Meanwhile, other feminists find the comparison between women and dairy cows to be offensive—people don’t usually like being compared to animals.)

In the dairy industry, cows are impregnated, and when they give birth, their calves are typically taken away from them in a number of minutes, hours, or days. This is a process that blatantly disregards what the cow might choose for herself. The farmers have decided for her that she will give birth for them, for their profit.

If you oppose the idea that cows should be forced into giving birth on dairy farms, then some argue that you should also be pro-choice, so pregnant humans are not forced to give birth either.

If you’re trying to win bodily autonomy for cows, you should try to win at least the same rights for women—that’s the argument. That said, there are obvious differences between what’s happening to cows and what is happening to women.

A common response from anti-abortion activists to the slogan “My body, my choice” is that “It’s not your body” (meaning: the fetus is not your body, it’s another person’s body that is inside of your body).

But should we grant “personhood” to a fetus that is dependent on the mother for at least 20 weeks before it is sentient and viable to survive outside the womb? More on that below.

On the other hand, pro-life arguments made by vegans are usually based on the following ideas:

This may be a shorter, more simple list than what I was able to write for the pro-choice vegan arguments—but the number of arguments you can list is obviously not what’s important here. One simple argument might be enough reason for you to adopt a particular stance on abortion.

PETA recently placed a billboard in Kentucky that said, “Pro-Life? Go Vegan.” But it should be noted that this doesn’t reflect an actual anti-abortion stance from PETA. They just want to make any argument they can to promote veganism. In fact, PETA did another billboard that said “Pro-Choice? Choose Veg.” More on PETA’s (lack of) abortion stance below.

Within the vegan straight-edge punk and hardcore scenes of the 1990s, a specific vegan subculture developed with a “hardline” philosophy that promoted an anti-abortion stance based on the sanctity of life.

Hardline vegans also opposed homosexuality, as they only believed in using sex for procreation. But this did not become a major stream in contemporary vegan thought.

Another resource I want to share is this page. To my knowledge, it’s not written by a vegan, but it does explain the logic of why you would take a pro-life position very clearly (or, more accurately, it critiques common pro-choice positions).

That said, Singer draws pro-choice conclusions anyway because he doesn’t think “life” is the important factor. (After all, grass is alive and we’re okay with ripping up grass.)

Veganism and The Sanctity of Life

Believing in the “sanctity of life” can mean different things. In the West, it is often only applied to human life. In the East, it is more often applied to all sentient beings, due to the influence of some Eastern religions (it’s common for Buddhists to be vegetarians).

Some pro-life vegans say that “being vegan is about respecting and defending life, which abortion takes away.” But the word life is not being used very precisely here.

So in order to oppose abortion as vegans, we can’t just say “fetuses are alive, end of discussion.” Because plants are alive, too.

As a fetus, you are not independently capable of becoming sentient by yourself—you rely on support from your mother up until that point.

Should a mother be ethically obligated to provide enough support to get a fetus to that point where it becomes sentient? Providing that support does often come at a significant cost to her (although it often provides great meaning, too, of course).

At what point does a fetus become reasonably entitled to the completion of their journey to sentience? They cannot do it alone, so I don’t feel certain that they should be entitled to it.

Common Questions About Veganism and Abortion

Are pro-choice vegans hypocrites? Depending on your beliefs, it is ethically and logically consistent to be a pro-choice vegan. A human fetus is not the same as a living animal, so it makes sense that some people will find it permissible to kill one and not the other.

How many vegans are pro-abortion? A poll taken by Sistah Vegan reported that 44% of vegan respondents were pro-choice, 46% were pro-life, and 10% selected “not sure” or “other.” However, this data may be biased since the readers of Sistah Vegan do not represent all vegans.

What is PETA’s stance on abortion? PETA does not have a stance on abortion. They focus on issues that directly affect nonhuman animals. On their website, PETA emphasizes that there are people on both sides of the abortion debate in the animal rights movement.

As with many issues, we can’t lump all vegans together. Many people come to a vegan lifestyle for different reasons, and they find different things in it.

There are a million ways to be vegan, not only when it comes to food choices. How you understand veganism fitting into politics can vary dramatically.

Whatever you believe about abortion, it doesn’t necessarily contradict being vegan. This is because being vegan can be motivated by several different beliefs.

So don’t feel bullied by anyone to take a certain position on abortion just because you’re vegan. You can logically and consistently be vegan and pro-choice or vegan and pro-life.