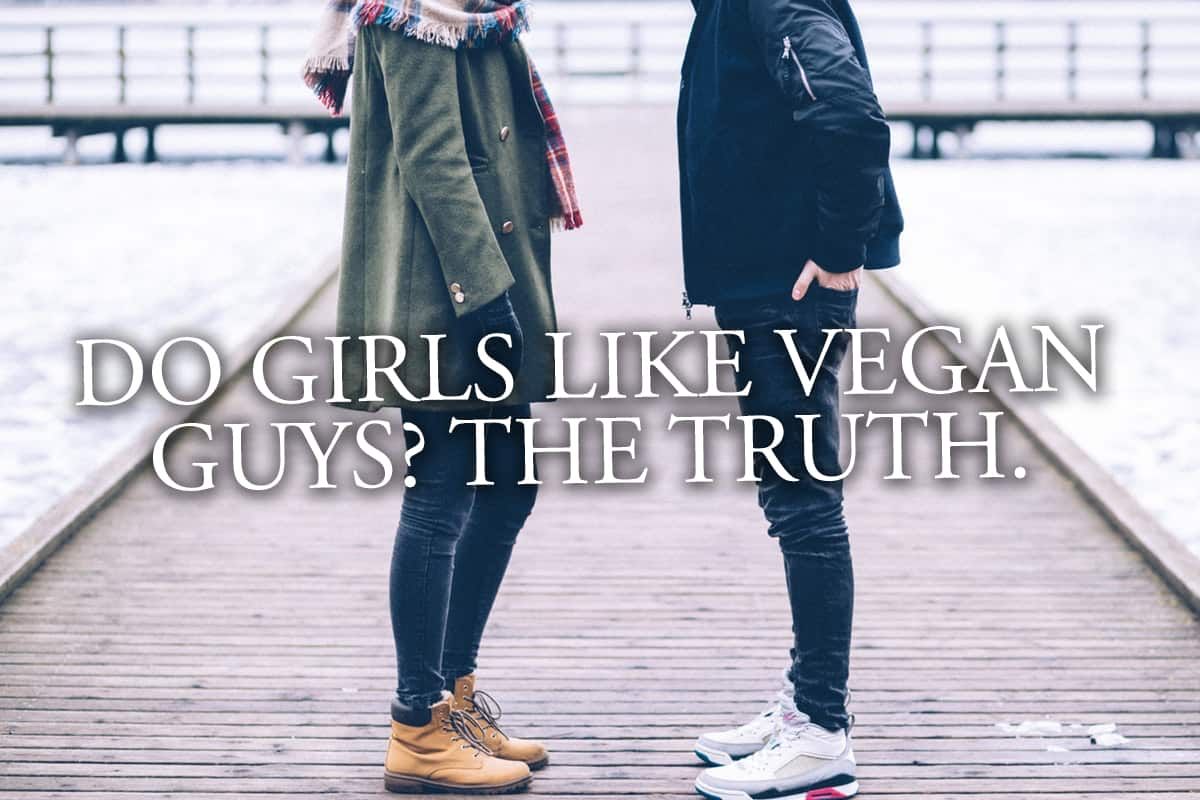 I keep seeing people online ask about the dating dynamics for vegan guys and whether being vegan is attractive to women. I knew my own experience, but I decided to do some research and see what the common experience is for vegan guys.

So, do girls like vegan guys? Vegan girls definitely like vegan guys. When it comes to non-vegan girls, the answer is less predictable. But many girls are attracted to the compassion, independent thinking, and lean physique found in most vegan guys.

Note: This post is mainly addressing what straight women think of vegan guys. Obviously, not all women (or men) like the same things. This post is just summarizing the patterns seen by many people.

This is because it’s obviously a big benefit to go into the relationship knowing that you don’t have major disagreements with your partner on philosophical issues like whether it’s okay to kill animals for food.

When I decided to start a vegan blog, the vegan woman I was dating at the time said to me, “The vegan girls are going to be all over you.” I laughed and said, “Wait, seriously?” And she said, “Yeah! Duh!”

It’s really common sense. Just think about how much more interested you would be in a vegan girl compared to a non-vegan girl. Most vegans like to date other vegans if possible.

Why Vegan Girls Like Dating Vegan Guys: More Than Convenience

The convenience factor and the ability to share all your meals and restaurant experiences definitely leads vegan girls to prefer vegan guys.

If you want to date vegan women, you should at least be willing to eat vegan meals with her. Many vegans express feeling grossed out about their non-vegan partner ordering meat at restaurants.

There can also be an instinctual “yuck” factor when you’ve been vegan for a while and you think about dating a non-vegan.

Eating meat and dairy impacts your body odor and how you taste (read my article about how vegans taste better), along with other factors that are relevant when you’re physically intimate with someone.

One positive for vegan guys is that there are more vegan women than vegan men. In a survey by the Vegan Society, 63 percent of vegans were women, compared to only 37 percent being men. So if vegan women are interested in dating vegan men, that bodes well for vegan men.

I found a post from a vegan woman on a message board that said vegan men are highly sought after by vegan women, and if you’re a vegan man who’s not “completely ugly,” you should have the “pick of the litter.”

When it comes to non-vegan girls, there’s less of a clear answer about whether they like vegan guys. Some will, some won’t.

But the evidence I’ve seen suggests that most are equally open to dating vegan guys compared to non-vegan guys, if not more so.

There are definitely still some stereotypes out there about meat being manly and tofu being feminine. But those ideas are more often held by other men, not by women.

Sure, there are some non-vegan women that will specifically want a meat-eating man. This opinion piece in the New York Post had non-vegan women saying they think vegan guys are “lame” and that they “can’t be trusted.”

But I think these kinds of ideas are becoming less and less common. Vegan athletes are making it more commonly known that you can be strong on a plant-based diet.

Most Non-Vegan Girls Are Completely Open to Dating Vegan Guys

(Often, when a non-vegan and a vegan start dating, the non-vegan will soon become vegan. More on this in my article, 5 Ninja Tips for Converting Your Partner to Veganism.)

Being vegan shows compassion and independent thinking, and these are very attractive qualities in a man, and it doesn’t necessarily take a vegan to see that.

Refer to the next section below for the 5 reasons why being vegan is attractive in men. They are reasons that even non-vegans can appreciate.

But another question to ask yourself is this: As a vegan, do you even care what non-vegan girls think?

If you’re vegan and you really believe in it, you’d probably prefer to find another vegan to date, at least for a serious relationship. If your social surroundings allow you to meet other vegans, you will probably connect better with them on average.

PETA did a series of experiments on Tinder where two almost-identical profiles were posted of a man. The only difference was that one had the word “vegan” and the other had the word “bacon.”

The vegan guy received twice as many matches compared to the bacon enthusiast.

This was not in a vegan-specific dating pool—it was on Tinder in general. So although this is not peer-reviewed research or anything, with twice as many swipes for the vegan guy, this does suggest that even non-vegan girls must like vegan guys on average.

The 5 Reasons Why Being a Vegan Man is Attractive

1. Compassion toward weaker and more vulnerable creatures is attractive.

Although traditional values suggest that men should be strong, that doesn’t mean they should be cruel or brutish. To the extent that women are looking for a strong man with “traditional masculinity,” what they really want is a compassionate leader or protector.

Proving that you’re strong or tough is not that hard, but having a vulnerable and compassionate side—acknowledging and caring for weaker creatures—is the perfect complement to it.

Today, only about 3% of Americans are vegan. Considering this, it takes independent thinking to choose a vegan lifestyle.

Thinking for yourself is a quality found in leaders, and it’s generally very attractive.

Do you have the courage to think for yourself, choose your own path, and then follow that path, even while 97% of Americans are not yet on the bandwagon? That takes a strong person. This makes veganism an attractive trait.

3. Vegans are more likely to be lean and have clear, glowing skin.

The higher amount of carotenoid antioxidants in a typical vegan diet have been shown to affect the coloration of vegan faces in a way that is judged to be more attractive. You wouldn’t need to be strictly vegan to eat more carotenoids and see these benefits, but it tends to go well for vegans.

Vegans also tend to have less acne. This may be due to the fact that dairy causes acne for many people. So together with the carotenoids, this makes for great vegan skin health.

Side Note: If you struggle with acne, you really need to read my big post on how I cleared up my acne. It took me years of studying and experimenting on myself to learn what I share in that post.

Add to this the fact that vegans are the only diet group with an average body mass index (BMI) in the “healthy” range. You can be lean on a non-vegan diet, of course—but it’s often easier to get lean on a vegan diet.

Many older men who go vegan have reported that it cured their erectile dysfunction. This is because a vegan diet, especially one based on healthy whole foods, can reverse the clogging of arteries caused by the standard American diet.

For more on the ED-reducing power of a vegan diet, check out this page from the Physicians Committee for Responsible Medicine.

Don’t forget that vegans also taste better (yes, I have a full blog post on that topic—click for the details!). Your… fluids taste better, that is. Not everyone knows this, but it definitely falls in the “pros” column for whether or not to date a vegan.

Are vegans “beta males”? Being vegan shows independent thinking, which is not characteristic of “beta males.” It takes confidence to be vegan when only 3% of Americans are doing it. So being vegan does not make you a beta male.

Are vegans better looking? While there’s no rule that all vegans are better looking, there are factors that make vegans attractive. Vegans tend to carry less body fat, have a more glowing complexion with clear skin, and look younger.

(For more evidence that a vegan diet can help you look better and younger, check out this article I wrote about vegan diets and aging.)

Being a Vegan Guy in the Dating Scene

And as noted above, confidence is probably the most attractive trait in a man. So embrace a life of following your values. If a few non-vegan girls out there judge you for it, the most attractive thing you can do is to disregard their opinion and keep doing what you believe.