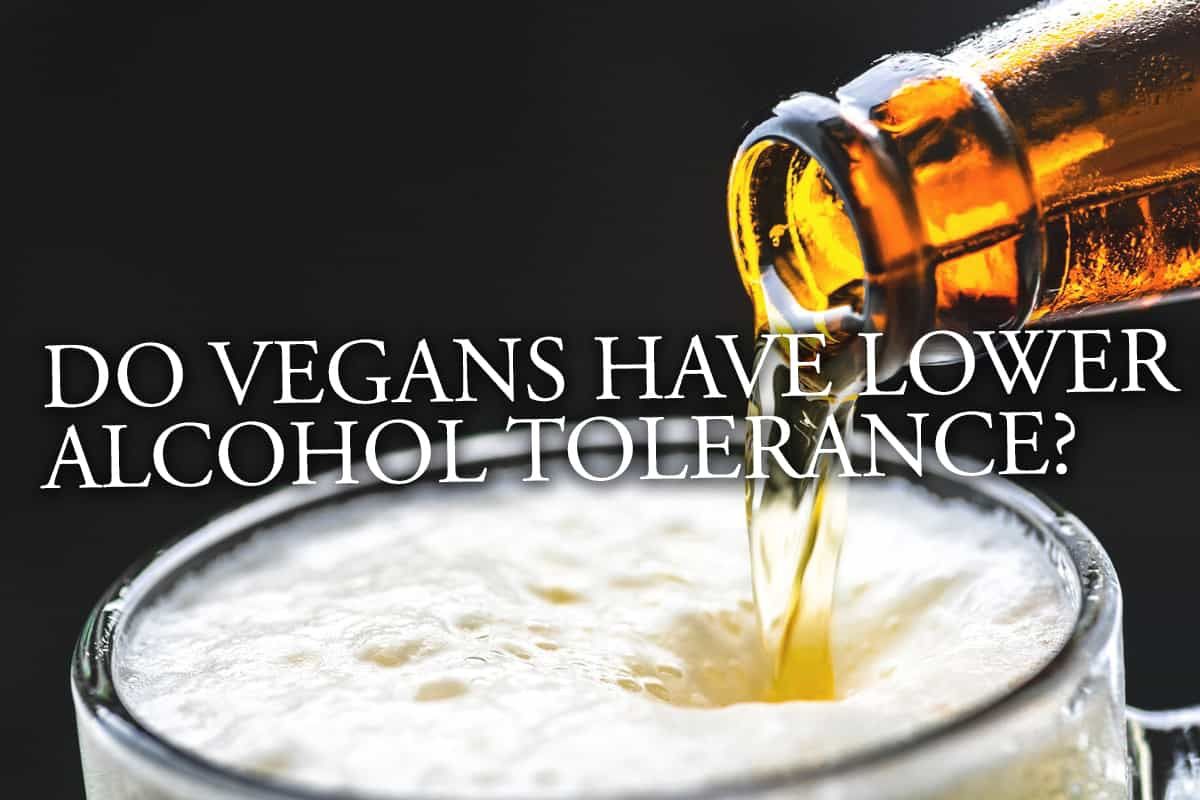 I recently heard online that vegans have lower alcohol tolerance. I haven’t witnessed this personally, but I was curious if this is true and why, so I did some research.

Let’s dig a little more into the possible causes of lower alcohol tolerance in many vegans. There are actually several different theories that could explain this phenomenon.

When researching the effect of going vegan on alcohol tolerance, I didn’t find much as far as authoritative sources. But I did find dozens of forum posts where hungover vegans were asking if there’s a scientific explanation for this.

Typically, the comments are full of people agreeing and sharing similar stories. So it seems common for vegans to have a lowered alcohol tolerance.

That said, not all vegans struggle to hold their alcohol. Some comments in the forum posts would say “Not me, I drink more than ever as a vegan, and I’m fine.” So it’s not an absolute rule.

Since not all vegans are affected by a lower alcohol intolerance, that makes you wonder whether it’s just an issue of variability between individuals, maybe based on genetics, body weight, or something else, or whether it’s not veganism itself that is causing the change in alcohol tolerance.

In general, when you make your diet a lot healthier and cut back on processed foods, you might notice that processed foods make you feel worse than they used to. Your body just isn’t used to being abused with all that junk anymore.

I know for me, when I’ve eaten the healthiest version of my vegan diet, strictly focusing on whole foods, I’ve developed a lower tolerance for any unhealthy, processed food. Refined sugar is a wild ride when you haven’t had it for months.

Many people who shared anecdotally about their lower alcohol tolerance on vegan forums seemed to think it was a similar effect happening: Your body becomes less accustomed to dealing with junk on a vegan diet, and so alcohol is no longer as welcome, or not in the same quantities.

If this was the case, we would expect to see that vegans eating a lot of processed food are able to keep a high alcohol tolerance. I haven’t done the research to see if this outcome holds up.

Another indirect cause for lower alcohol tolerance in vegans could be weight loss. Although it’s possible to maintain your weight and even gain weight on a vegan diet, it is common to lose weight.

Still, there may be confounding factors. Is the lower alcohol tolerance in dieters due to lower body weight, or is it actually due to the lower calorie intake per day or healthier eating patterns that are also adopted for the diet (see above section on processed food and alcohol tolerance)?

Side Note: If you’d like to lose weight on your vegan diet but haven’t yet… you should try Nutriciously’s free weight loss challenge. They put together a free 5-part email course on how to do veganism for weight loss specifically.

You’ll learn what causes weight loss on a vegan diet, and what mistakes to avoid. You’ll get a meal plan plus the overall idea of what you need to do. I love Nutriciously’s guides—sign up for this free challenge at least!

Another theory is that vegetarians and vegans have a lower alcohol tolerance due to the fact that plant foods are digested quicker than meat. Therefore, vegans may more frequently experience the effects of “drinking on an empty stomach” compared to meat-eaters.

Alcohol mixed with food takes longer to absorb into your bloodstream. Meat takes longer to digest, so it’s hanging around in your digestive tract longer, maybe diluting/blunting the effects of alcohol consumption.

Vegans have a higher average consumption of fiber, which helps clean out the digestive tract and keep things running quickly and efficiently. So this may allow for alcohol to more quickly reach the small intestines and then the bloodstream.

Wait… Is Alcohol Even Vegan?

Yes, there are plenty of vegan alcohol options, no matter how strict you want to be about avoiding animal products. Mostly all hard liquor is vegan, and the majority of beers and wines are, too. But not all.

Some beers and wines are processed with animal ingredients such as isinglass, gelatin, or egg whites. A few alcoholic drinks also contain honey or dairy. So these are not vegan by all definitions.

In practice, many of the vegans I know don’t really check the specifics of whether their alcohol choices are vegan. It’s not usually listed on the label, and it doesn’t seem to be a big issue to everyone.

If you want to check whether your alcohol is vegan-friendly, you can go to Barnivore. They have pretty comprehensive lists of alcohol brands, specifying which of their products are vegan-friendly.

What About “Vegan Straight Edge”?

Vegan straight-edge is a subculture connected to hardcore music in which, along with being vegan, participants abstain from drinking and doing drugs.

But not all vegans are straight edge—only a small portion of them are. So day to day, most vegans that you encounter are happy to have vegan alcohol options available to drink.

So, Does Being Vegan Lower Your Alcohol Tolerance Or Not?

A significant number of vegans do report having lower alcohol tolerance. But not all vegans experience this, and no real scientific studies seem to have been done about it.

So if you are newly vegan, I would consider just keeping an eye on your alcohol consumption and how you feel as a result. Be wary of overdoing it in case you are one of the vegans who become less tolerant of alcohol.