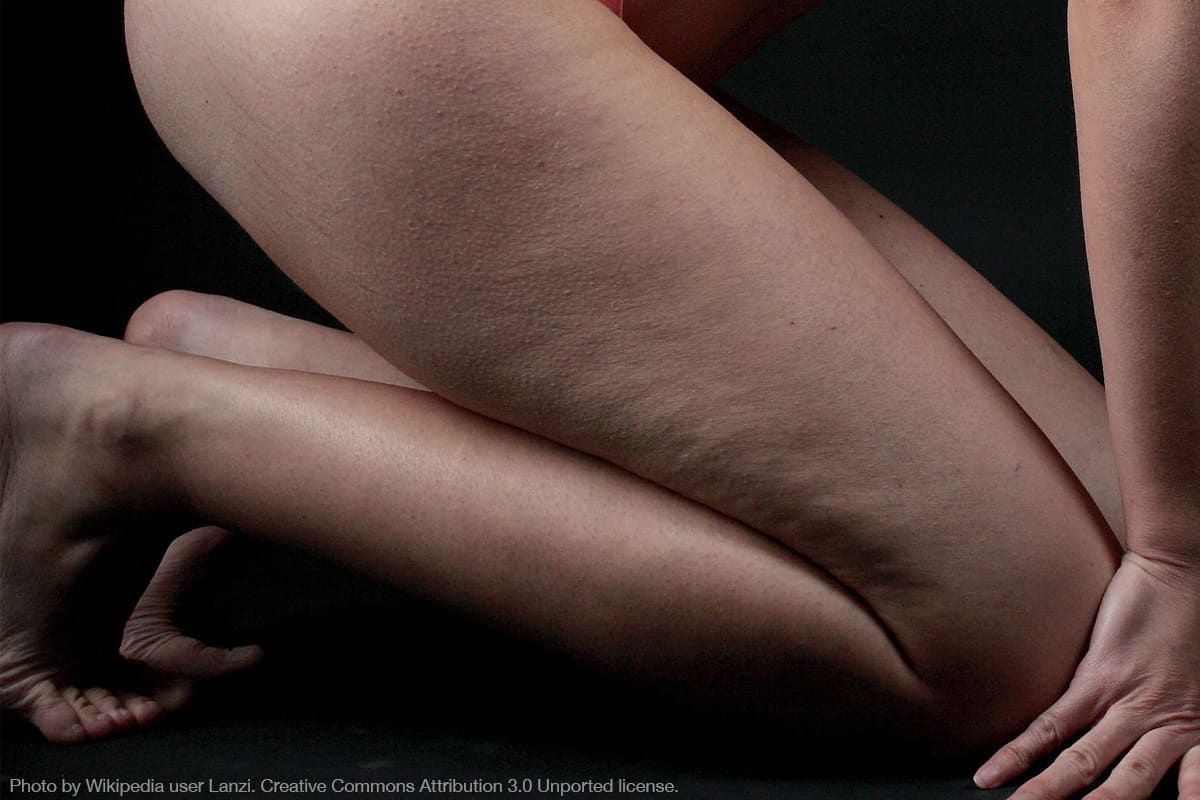 Did you know that 80-90% of adult women have cellulite to some degree? It’s an extremely common condition—yet it’s incredibly frustrating for many. You may have tried several fixes for cellulite already. But have you considered going vegan?

Early evidence suggests that a vegan diet may help reduce cellulite. Researchers have not yet tested it directly, but some suspect a plant-based diet could reduce cellulite by three mechanisms: Reducing overall body fat, reducing spermine and spermidine levels in the diet, and raising adiponectin levels.

Below, I’ll dive into the science of cellulite and its suspected connections to diet. I’ll cover which problem foods are most concerning. And at the end, I’ll share 7 practical tips for an anti-cellulite vegan diet.

It’s important to first understand what cellulite is, in order to understand how diet affects it.

Most prevalent in women, cellulite appears as bumpy or dimpled skin, and it’s often compared to an orange skin or cottage cheese texture.

Cellulite usually affects the thighs, buttocks, and stomach, but can appear elsewhere, too. There are different levels of severity:

While there are many creams, pills, and treatments available, none are proven to fix cellulite long-term (source). Most women have at least some cellulite (and many men have it too).

While cellulite is nothing to be ashamed of, some people prefer the way they look without it and want to find ways to prevent or get rid of this type of fat.

First, let’s look at what’s actually happening when you see cellulite on your skin. Then we’ll address the causes.

It’s hard to say exactly what causes cellulite, but researchers have found there is a heavy genetic link. If people in your family have cellulite, there’s a much higher chance you will, too.

That said, cellulite is fat—so people with less overall body fat tend to have less cellulite. Skin structure, skin type, and body type can all play a role in the appearance of cellulite.

While gaining muscle and losing fat can be helpful in getting rid of cellulite, these actions can only go so far. Aging itself tends to increase the appearance of cellulite. (source)

People with less body fat and more muscle often find their cellulite is harder to see. Increased muscle can cause a smoother appearance of the skin. The fibrous cords that connect skin to muscle don’t have to stretch as far, so there’s less chance of dimpling.

Reducing Cellulite with a Vegan Diet?

Research is ongoing about the connection between food and cellulite… But it’s likely that eating processed animal foods contributes to the condition.

First, there have been anecdotal reports of this—for example, this YouTuber reporting on how a 90-day vegan diet helped with her cellulite. Her diet also cut out processed foods including oils.

But more importantly, there are findings in the scientific literature that give us hope on this front, too.

Dr. Michael Greger over at NutritionFacts.org did a great job covering some of the reasons for looking at a vegan diet and cellulite. If you’d like to watch a video, check this one out. If not, keep reading for the highlights.

Can a Plant-Based Diet Prevent Cellulite?

To be clear, there are no interventional trials that I know of which directly show a plant-based diet reducing cellulite. But there is some relevant science we can look at.

The reason for the suspicion toward those foods is spermine and spermidine. These compounds have been shown to lead to excess fat storage and reduced fat-burning.

Ok, so, reducing those high-spermine foods may help. But we don’t have direct studies on that yet. What else should we know?

Some research has also shown a connection between cellulite levels and the hormone adiponectin. Fat biopsies of women with and without cellulite has shown: Cellulitic fat tends to have lower levels of adiponectin.

So, how can we boost our adiponectin levels (and potentially reduce cellulite)? Switch to a plant-based diet.

Of course, plant-based diets also typically help with fat loss overall, which can reduce the appearance of cellulite. Indeed, studies show a meat-free, egg-free diet can reduce overall fat levels compared to a standard American diet, even when calories are equal.

I covered several additional vegan fat loss studies in my post, “How Long Does It Take to Lose Weight on a Vegan Diet?”

Dairy And Cellulite: Is There A Connection?

For people on the fence about going vegan, dairy is often one of the food groups they’re most apprehensive about giving up… Well, if you need a final push to help you make the change, listen up: There is a possible connection between dairy and cellulite.

We’ve already covered how processed cheeses like American cheese and cheddar cheese are loaded with spermine and spermidine, which cause excess fat storage. But there’s even more to be worried about.

Estrogen is present in dairy products, and increased levels of estrogen may lead to more fat storage and more visible cellulite. Honestly, I’m not sure if this is as big of a factor as the points we already covered above… but it’s another possible strike against dairy.

If you’re making the switch to a plant-based diet with the goal of reducing visibility of cellulite, cutting out dairy first may be a good way to transition.

Cutting out dairy has other benefits, too. You’ll likely notice yourself getting clearer skin as a bonus. See my big post on diet and acne for more about that. In it, I share my personal journey to clearing up acne as a vegan. Dairy plays a role but is not the only factor. There are some other really surprising problem foods, too. Read about it all here!

7 Tips for an Anti-Cellulite Vegan Diet

If you want to harness the full power of the vegan diet to reduce cellulite, follow these tips:

1. Set yourself up for success. You know yourself—so create a plan that’ll allow you to succeed. If you’re the kind of person who wants to go vegan overnight, then go ahead! But if you need to transition slowly, that’s okay, too. The last thing you want to do is create a plan that’s not sustainable.

2. Stick with whole foods—limit processed foods. Eat fruits, vegetables, beans, whole grains, nuts, seeds, and less-processed protein like tempeh. Limit the packaged, processed foods, even if they are “vegan.” Follow a vegan starter kit like this one that’s healthy to the core.

3. Eat fruits and veggies high in vitamin C. Some good choices are broccoli, bell peppers, berries, leafy greens, potatoes, and tomatoes. Vitamin C helps stimulate the production of collagen, which can help reduce the appearance of cellulite. Why not make an anti-cellulite smoothie packed with berries and greens?

4. Consider limiting your intake of green peas. I explained above why spermine and spermidine are possible culprits in cellulite. Most of the high-spermine foods are meats and cheeses that are excluded on a vegan diet. But green peas are also packed with these compounds.

5. Add some flaxseed to your day. Flaxseed is one of those superfoods that has a seemingly endless list of benefits. And it’s affordable, too—unlike some superfoods. In terms of cellulite, flaxseed may help regulate estrogen levels, which can be a help, as explained above.

6. Sip some tea. Antioxidants help slow the loss of collagen, which can help reduce cellulite. And when you drink tea, you’re flooding your body with antioxidants. Green tea or chamomile are good choices. The caffeine in green tea or the stress-relief from chamomile tea can both help with overall fat loss, too.

7. Do some resistance exercise. As explained above, building muscle can often lead to a smoother skin appearance, as well. So lifting some weights or doing bodyweight squats and other calisthenics may be a helpful addition to your lifestyle, as well.