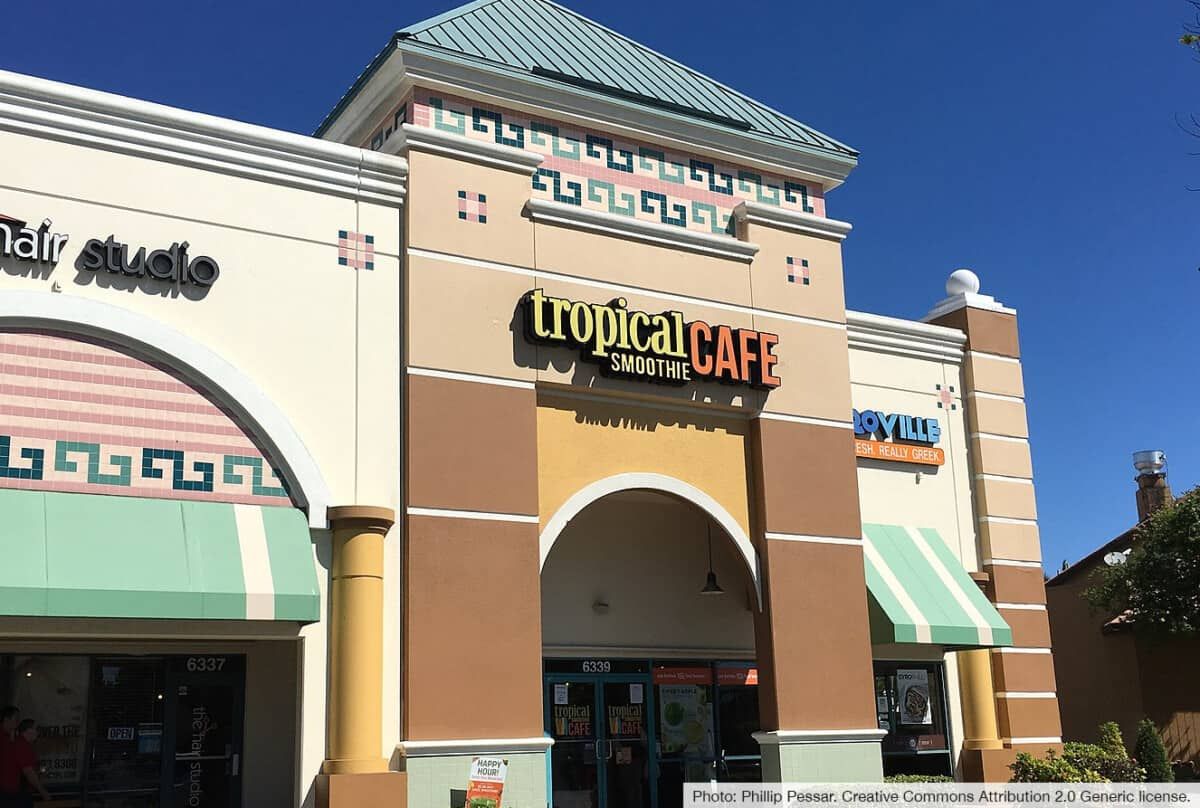 Many chain restaurants only have like two vegan options. But Tropical Smoothie Cafe is a whole other story! There are a ton of vegan smoothie flavors, and they have Beyond Chicken you can substitute into dishes, too. Let this post be your full guide!

Full list of vegan smoothies below—there are a lot! I’ll also share instructions on how to order Beyond Chicken to substitute into any chicken item they have. And I’ll answer a common question about the Kale & Apple Slaw.

I’ll end with an attempt at a whole-food-plant-based guide to Tropical Smoothie Cafe, for those of you avoiding fried and processed food, too!

To make this vegan menu, I consulted the official allergen menu and nutritional info on the Tropical Smoothie Cafe website. There are a lot of vegan options, and there’s especially a lot of chicken items that can be made vegan by substituting in Beyond Chicken.

A ton of their smoothies actually come vegan the standard way. You don’t even have to substitute any ingredients in these:

If there’s a smoothie you want that’s not on this list, you can check the list of smoothies containing milk below to see if it’s there. Or you can just ask staff.

Tropical Smoothie Cafe has Beyond Meat Chicken-Free Chicken Strips! This means you can substitute them into pretty much any chicken dish they have. As long as you’re sure to exclude the other non-vegan ingredients, this gives you a lot of options!

But you can substitute Beyond Chicken into plenty of other dishes, too. Just be clear with your order that you want it made vegan, so that means no other meat, dairy, or egg. They should be able to help you with that.

You can also just get the hummus veggie wrap or bowl without the Beyond Chicken. It’s still plenty to get full on by itself.

Now this is a great idea. Why don’t more restaurants offer a toasted vegan peanut butter and banana option?

I highly recommend this one. Just ask them to exclude honey. The bananas add enough sweetness anyway, so you’re not missing anything.

If you want a piece of whole fruit, these are usually available as sides:

If you want a normal soft drink rather than a smoothie, you’ve got plenty of vegan options there, too:

These smoothies are not vegan, as they contain milk:

You may be able to make some of these vegan, if you ask. But they won’t come vegan just standard off the menu.

Is the Kale Apple Slaw at Tropical Smoothie Cafe Vegan?

The Kale & Apple Slaw is not vegan, as it contains egg.

With most of my vegan guides to restaurants, I like to include a list of whole-food plant-based (WFPB) options, too. Such a list can be helpful if you’re vegan for health and trying to strictly avoid fried and processed food, too.

Tropical Smoothie Cafe doesn’t list their full ingredients on their website, so it’s hard to confirm which smoothie recipes are fully WFPB. Smoothies can obviously be WFPB if it’s just blended up fruit and veg. You may want to ask to make sure they don’t add any syrups.

Another gray area for eating whole-food plant-based is fruit juice. Although it’s made from healthy fruit, fruit juices can be very high-glycemic due to all the sugar and the lack of fiber. So you may want to avoid smoothies that contain these concentrated juices, too.

Beyond Meat is mainly made from protein powder and oil, so it’s definitely not a whole food.

So, despite the plentiful vegan options at Tropical Smoothie Cafe, it’s actually a little complicated trying to identify the fully WFPB options. You should be able to get a good green smoothie. But you can definitely grab some pieces of whole fruit, at the very least!