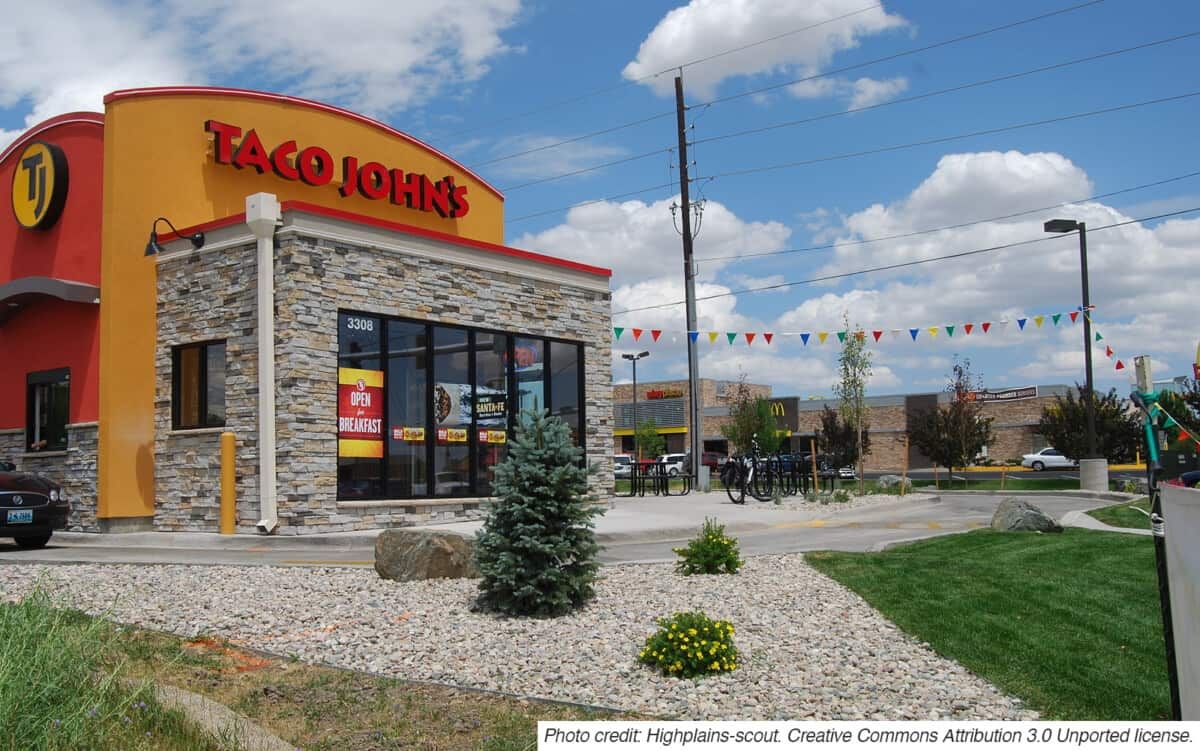 Taco places tend to be good for vegans. You can usually get a bean burrito and chips, at the least. I recently decided to make some more complete vegan guides, however.

When I reached out to Taco John’s to ask about all their vegan options, I was connected to someone on their Research and Development team. They helped me compile the following information.

So, in practical terms, what meals are you looking at? Most people recommend getting a bean burrito (without cheese), and loading it up with veggies, guac, and salsa.

But you can also get vegan tacos and vegan bowls. I’ll cover how to order them below. I’ll also answer some questions like, “Are the taco shells fried in the same fryer as the meat?”

How to Order Vegan at Taco John’s

Since there are animal products that come standard in all of the following menu items, be sure to be clear and vocal about what you want included or excluded. You really have to custom order.

The bean burrito requires the least customization, but even then, you need to be clear that you don’t want cheese!

If you want a vegan burrito at Taco John’s, start with the Bean Burrito. Tell them you want it without cheese. Then modify it further to your personal liking, if needed.

Some people recommend adding guac, pico de gallo, or even adding the potato olés, which are basically tater tots (or like, bite-sized hash browns).

Personally, I’m a fan of tater tots in my burritos, so I would recommend it!

You can order vegan tacos from Taco John’s if you’re clear about what you want included and excluded.

In fact, when I spoke to the R&D representative from Taco John’s, this was made very clear with a taco example:

“I will recommend ordering the menu item as you desire (Ex. Soft Shell Taco – No Meat, No Cheese, Add Roasted Veggies, etc..) highlighting the fact of your dietary needs you need to ensure there is no meat, dairy, or eggs. Our restaurants will be happy to customize based on your needs.”

There’s no almost-vegan taco option at Taco John’s, so if you want to order a vegan taco, you kind of have to build the taco from scratch.

For a vegan shell, you have the choice between a soft-shell tortillas, their Crispy Taco Shells, and their Taco Perfecto shells.

Vegan items to include in your taco:

You can also order bowls at Taco John’s, and these can be customized to be vegan, too.

The standard Boss Bowl at Taco John’s contains sirloin steak or chicken, along with cheese and sour cream. So it will need to be heavily modified. But if you are clear, they can make it vegan for you.

I would say something like: “Can I get a boss bowl without any meat or dairy? So it will just be rice, black beans, lettuce, and pico de gallo. And can I get fire roasted vegetables added to that, too?”

Basically, it’s going to be a bowl of beans and rice, with salsa and lettuce in it. This is pretty good with a side of chips in my opinion.

Maybe it’d be cheaper to just make beans and rice at home—but if you’re eating with family or friends at Taco John’s, this is an option you have!

There is a side salad option at Taco John’s, too. It usually comes with cheese, but you can order it without cheese, and then it’s fully vegan.

Here are some vegan sides at Taco John’s:

You can get Pepsi products at Taco John’s, along with Lipton tea and Boyer’s Coffee. All of these can be vegan.

Mostly all Pepsi products and Lipton teas are vegan. Weirdly, Diet Pepsi may not be fully vegan, however. Of course, be mindful of dairy when ordering your Boyer’s coffee.

For dessert, you pretty much only have the Giant Goldfish Grahams from the kids menu. The Churro Bites and Mexican Donut Bites both contain dairy.

PETA listed Taco John’s in a round-up blog post a while back with 25+ restaurants where you can order vegan bean burritos.

Here was PETA’s tip for what to get at Taco John’s:

Makes sense. But I would recommend adding the potato olés, too!

Some vegans care about this issue, others don’t. But do the vegan options at Taco John’s share the same griddles and fryers as the meat?

Taco John’s told me that their taco shells and tortilla chips are typically fried in the same fryer as animal products, including their crunchy chicken.

Personally, this doesn’t bother me that much, but I understand that it does bother many vegans. It’s a little gross to think about, but I don’t feel bad about supporting the vegan options on the menu.

If you want to look through the Taco John’s menu with your own allergen criteria, access their nutritional and allergen information here on their website.