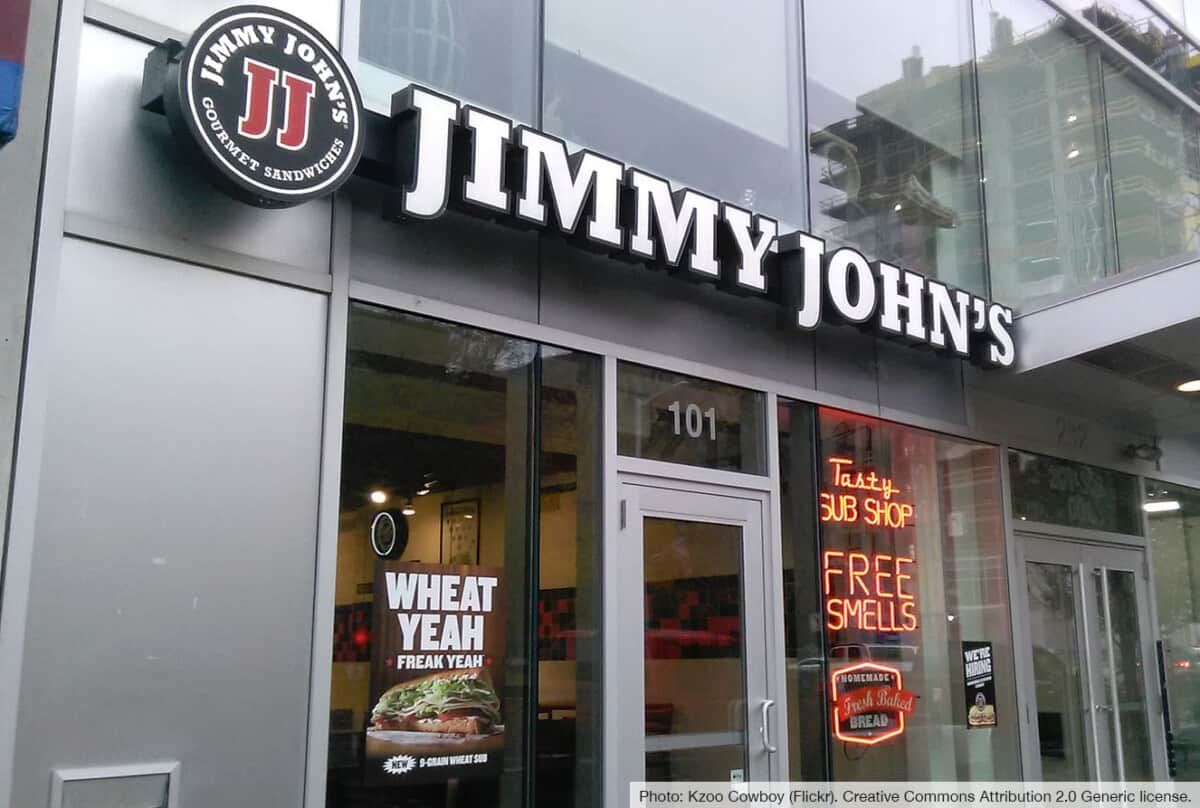 More details on all these below. I’ll share my friend’s 3 top tips for how to customize your Veggie Sub to make it even more filling and delicious. I’ll also address some controversy over whether Jimmy John’s bread is vegan, and the reason why some vegans boycott Jimmy John’s entirely!

I’ll end with a guide to eating whole-food plant-based at Jimmy John’s—in case you’re trying to avoid all processed ingredients, too!

I consulted three sources to make the following vegan menu. First, I spoke to my vegan friend who’s worked at Jimmy John’s for years. Second, I spoke directly to a Jimmy John’s rep. Third, I cross-checked those sources with the allergen info on Jimmy John’s website.

So, the following options are solidly vetted as vegan. But it still doesn’t hurt to check with your local Jimmy John’s location about any details you feel unsure of.

Veggie Sub (No Cheese or Mayo)

Jimmy John’s has a vegetarian sub, so that’s a common-sense place to start with your order. You need to get it without cheese and mayo. Then you can potentially add some things, too.

The veggie sub comes with avocado, cucumber, lettuce, tomato, and sprouts. They also have onions and peppers you can add, if desired.

My friend had 3 extra tips for me when it comes to special-ordering the Veggie Sub. Again, these come from his years of working as a vegan Jimmy John’s employee:

1. He recommends getting extra avocado. This might cost extra depending on the location/staff currently working, but it really makes the sub more filling.

3. He recommends asking for “Leave Bread In” (LBI). This makes them give you a bit more bread, instead of ripping out the middle to make more room for toppings.

So that’s the expert inside scoop on how to get the most vegan value at Jimmy John’s!

If you choose to build your own vegan sub, you can choose between these four options for holding your sub together:

What many people don’t know, however, is that you can also just buy Jimmy John’s bread by itself—and it’s really good and cheap. It’s something like $1 for fresh bread, or $0.50 for day-old bread.

That’s another tip I got from my friend who worked at JJ’s for several years. He would often get some extra bread just to have as a sort of baguette at home. He said it smells amazing when it’s fresh.

Confusion on Whether Jimmy John’s Bread Is Vegan

I spoke to a Jimmy John’s rep before writing this guide, and he listed the bread as “not vegan-friendly.” This surprised me because it contradicted what my friend, a veteran vegan JJ’s employee, told me. When I asked the rep why it wasn’t vegan, he simply said it’s because it’s made in a facility that also uses eggs.

As I wrote in my post on “What Does ‘May Contain Milk’ Mean?” most vegans choose not to boycott products based on a facility shared with animal products. So, in fact, the far majority of vegans would consider Jimmy John’s bread to be vegan.

Here are the vegan toppings and spreads they’ll usually have:

Most of Jimmy John’s chips are vegan:

Note: The Salt & Vinegar Jimmy Chips are not vegan, as they contain milk.

Jimmy John Liautaud is the founder of Jimmy John’s, and he also hunts big game… including endangered animals like the Black Rhino. You can find pictures of him posing with dead leopards, dead elephants, dead giraffes, dead bears, and so on.

This is objectionable to a lot of environmentalists, vegetarians and vegans, and just anyone with a conscience when it comes to animals.

So this is one reason you might choose to boycott Jimmy John’s as a vegan, regardless of how good their bread smells or whether you can get their Veggie Sub made vegan pretty easily. It’s up to you and your reasons for being vegan.

For my vegan guides to restaurants, I usually like to map out how you could also eat a strict whole-food plant-based (WFPB) meal there. This might help some especially health-conscious vegans trying to avoid processed and fried foods.

Here are the strict WFPB options at Jimmy John’s:

If you’re a bit more flexible, you could get the 9-Grain Baguette or Thick Sliced Wheat instead of the Unwich. Those breads might be loosely considered “whole grain”—however, they do contain soybean oil, which is an omega-6 rich oil (and not great for you!).

Basically, if you want to be strictly WFPB at Jimmy John’s, you’re eating a bunch of veggies with avocado spread. Could be worse, but it’s not the best option out there.