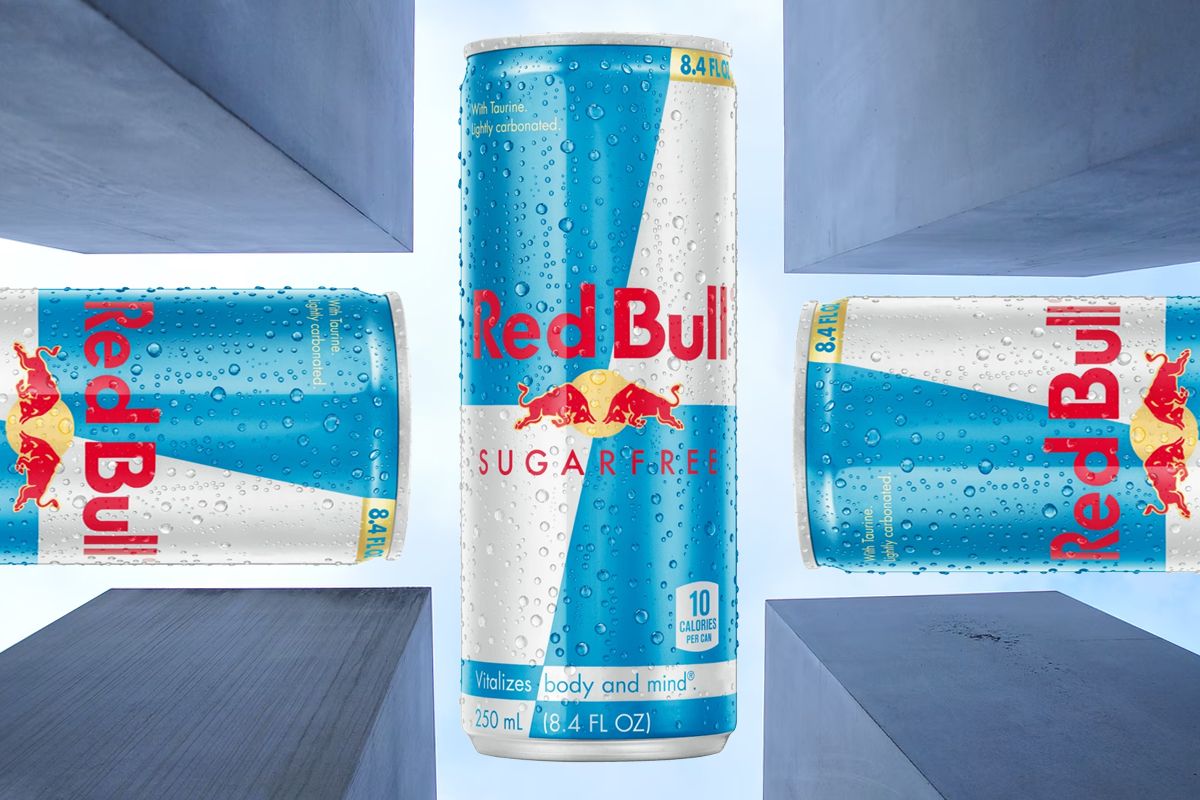 Sugar is bad, right? So making something “Sugar Free” must be an improvement, right? Well, not necessarily. Today, let’s take a look at Red Bull Sugarfree to see if this drink is actually healthy or not.

Below, I’ll dig into all these ingredients in Red Bull Sugarfree and the research on whether they’re healthy. I’ll discuss whether Red Bull Sugarfree is a good choice for weight loss, whether it raises blood-sugar levels, and much more!

Is Sugar-Free Red Bull Bad for You?

Here are the 12 specific questions I’ll be answering about Sugar Free Red Bull nutrition. Click any of them to skip ahead to that section—or just keep scrolling to read them all:

1. What Is Sugar-Free Red Bull Made Of?

Here are my takeaway points on these ingredients:

Consumed in moderation, Red Bull Sugarfree may provide a few helpful ingredients like caffeine, taurine, and B vitamins. But is it worth the negatives of the artificial ingredients?

The biggest concern in Red Bull Sugarfree for most people may be the artificial sweeteners. So let’s take a closer look at those next.

Red Bull Sugarfree contains the artificial sweeteners acesulfame K and aspartame. These are two of the most widely used artificial sweeteners in the world, and both FDA approved. However, studies have suggested possible links to cancer, heart disease, obesity, stroke, Alzheimer’s, depression, and more.

Let’s start by discussing aspartame, since it’s especially controversial. It’d be hard to cover all of its possible health risks here. If you want to go deep on this subject, start with this page from U.S. Right to Know. That said, I’ll try to summarize.

Now, what about acesulfame potassium? This sweetener is often referred to as “acesulfame K” or “Ace-K.” Here are some concerns people have with it:

Overall, remember: The long-term health concerns with artificial sweeteners are just that—concerns. If they were proven to be acutely and definitely unsafe, they would probably not be approved by the FDA and other government bodies around the world.

The important thing is to acknowledge that you’re taking some amount of risk with the artificial sweeteners in Red Bull Sugarfree and other zero-calorie drinks. But you may be just fine, especially in moderation.

Red Bull Sugarfree is indeed sugar-free. It has no cane sugar, high fructose corn syrup, or other sugars. It has the artificial sweeteners aspartame and acesulfame K instead.

Red Bull Sugarfree is not carb-free, however. It has about 3 grams of total carbohydrates and 5 calories in each 8.4 ounce can.

Specifically, aspartame and other artificial non-caloric sweeteners seem to alter your gut bacteria. This can affect your tolerance to carbs on an ongoing basis.

I also found some discussions of artificial sweeteners causing insulin issues through another mechanism. That is, the sweet taste may trigger an insulin response even without real sugar in your bloodstream.

So, proceed with caution. If blood-sugar control is crucial for you, I’d recommend testing whether Red Bull Sugarfree has any affect for you. Also, keep in mind that some effects on your blood sugar may be delayed, via long-term changes in your gut bacteria, which could multiple days or longer.

5. Is Taurine in Red Bull Bad for You?

You’ve likely seen “taurine” as a prominent ingredient in energy drinks, including Red Bull Sugarfree. But what is it, and is it any cause for concern?

Taurine is an amino acid used for many functions in our nervous system. It is sometimes called a “non-essential amino acid,” since we don’t need to consume it in our diet—it is already naturally occurring in our body.

It’s become common for manufacturers to add taurine to energy drinks like Red Bull. Why? There are some studies showing improved athletic performance from taurine.

Unfortunately, some of these often-cited pro-taurine studies are of low quality. And there are plenty of other studies showing no benefit of consuming supplemental taurine. So it’s hard to tell if taurine might be over-hyped or not.

That said, are there any risks or side effects of taurine consumption from Red Bull? Not that we know of. It’s hard to say for sure since long-term taurine supplementation has not been studied in depth, but it’s considered very safe for most people.

It’s likely that the taurine in your Red Bull is just neutral for your health. But there may be some real benefits—not just in sports performance, but in preventing diabetes, cardiovascular disease, and other issues.

Side Note: There is a common misconception that taurine is taken from bull testicles. But this is not accurate. Taurine used in energy drinks today is synthetically produced. Read more in my post about whether energy drinks are vegan.

6. How Much Sodium Is in a Sugar-Free Red Bull?

Red Bull Sugarfree has about 105mg of sodium per 8.4 oz can. That is about the same amount of sodium as in a handful of Planters Cocktail Peanuts. This is only about 5% of the daily recommended limit of 2,300 mg of sodium per day.

Of course, if you drink Red Bull Sugarfree all day, you could end up consuming at least several hundred milligrams of sodium from it. So be mindful if you’re trying to keep your sodium levels in check.

7. Does Sugar-Free Red Bull Have Caffeine?

Sugar Free Red Bull can help keep you awake when needed. But this caffeine can also have drawbacks. As explained by the Mayo Clinic, “Too much caffeine can increase your heart rate and blood pressure, interrupt your sleep, and cause anxiety.”

One of the reasons people choose zero-calorie drinks like Red Bull Sugarfree is to avoid extra calories. But the evidence shows that consuming artificial sweeteners is surprisingly ineffective for weight loss. And they may even lead to weight gain.

You’d expect that switching from sugar to zero-calorie sweeteners would cause significant weight-loss… After all, you’re cutting all those calories that you used to drink from sugar, right? But in most studies, they cause little to no weight loss.

Here’s one explanation: Artificial sweeteners keep you accustomed to sweet drinks and food. So you still get cravings for sweets, and you end up eating more calories from something else.

Other explanations have to do with your microbiome—that is, your gut bacteria. In any case, Red Bull Sugarfree (and other drinks with artificial sweeteners) may not be the best for weight loss.

But remember: The key to weight loss is your overall diet and calorie balance. One food doesn’t make or break your diet. So if your goal is weight loss, consider tracking your calories, or follow some of these 18 tips for weight loss without counting calories.

Whether you drink Red Bull Sugarfree will not make or break your weight-loss journey by itself. But it may be a negative, based on the research connecting aspartame with weight gain.

9. Does Sugar-Free Red Bull Cause Cancer?

There is no evidence directly linking energy drink consumption to cancer risk. That said, there are several ingredients in Red Bull Sugarfree that research suggests may potentially increase cancer risk. These include:

Unfortunately, there is not enough long-term research that’s been done to know the impact of these ingredients for sure.

While there are some lingering questions about the potential impact of each of these ingredients on cancer risk, it would be wildly inaccurate at this point to say that “Red Bull Sugarfree causes cancer.” We don’t know that.

Red Bull Sugarfree is generally not healthier than coffee. Coffee is typically healthier for most people, as it does not include any artificial sweeteners or colors. Furthermore, coffee is a rich source of antioxidants that are health promoting.

I’ll just mention this exception: If you add a lot of sugar or cream to your coffee, then it could potentially become more unhealthy than sugar free Red Bull at some point. I’m not sure exactly what point that would be, though, as it’s like comparing apples to oranges.

11. Is Drinking Sugar-Free Red Bull Everyday Bad for You?

Personally, I would not feel comfortable drinking Red Bull Sugarfree every day. Why? The main reason is aspartame.

The research into aspartame and depression was what initially convinced me to avoid the ingredient. But there are many possible issues, detailed above.

I would personally only have Red Bull Sugarfree as an occasional treat, if that.

It can be quite confusing when drink companies make multiple “diet,” “sugar free,” or “zero sugar” options. Like, what’s the difference between Diet Coke and Coke Zero, for example?

Well, Red Bull has the same situation going on. As of this writing, they make “Red Bull Sugarfree” and “Red Bull Zero.” Both have 0g of sugar per serving as a key part of their marketing. So, what’s the difference?

So, which is healthier—Red Bull Sugarfree or Red Bull Zero?

Well, it’s hard to say for sure. There have been studies showing possible health risks with all these artificial sweeteners in question. But personally, I’d probably choose Red Bull Zero.

I feel like there’s more evidence of health risks with aspartame than any other artificial sweetener. I could be wrong, but that’s the impression I’ve gotten when researching these ingredients. So I try the hardest to avoid that one.