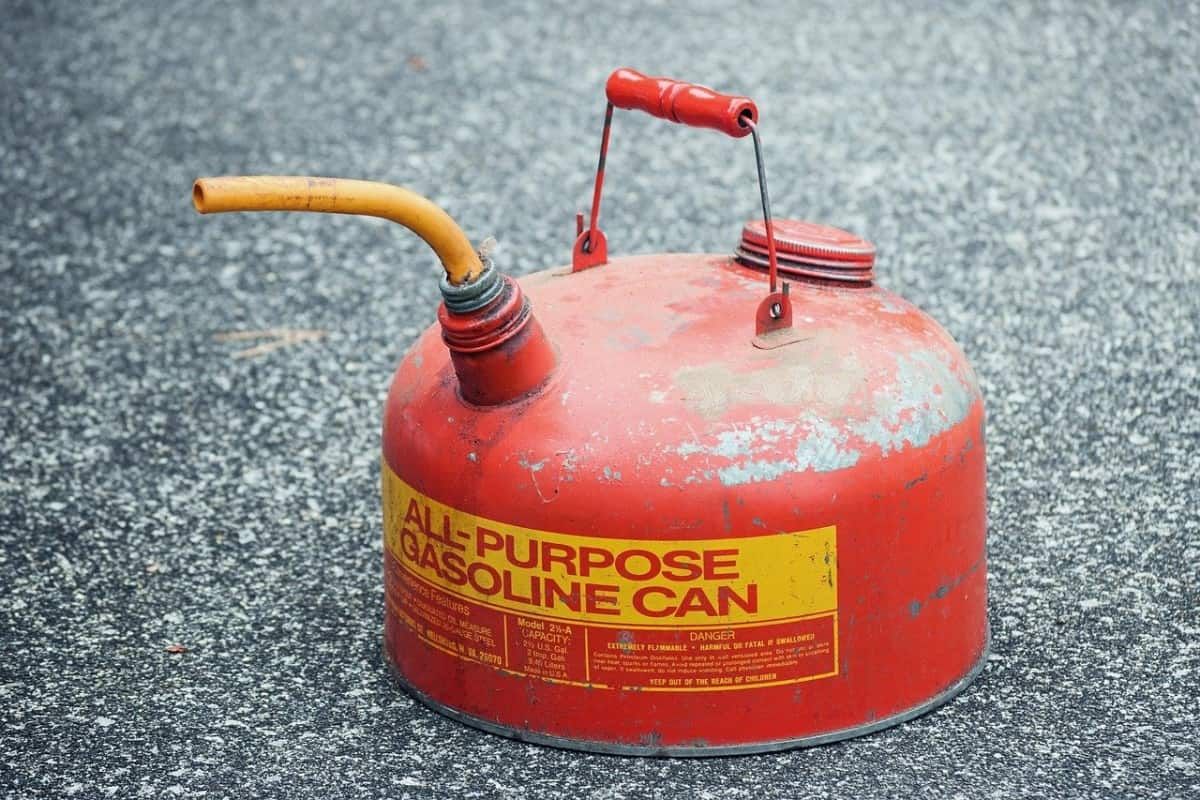 I’ve written on this blog before about whether latex and glue are vegan. But how about gasoline? Is gasoline really made from dinosaurs, and if so, does that make it non-vegan?

Gasoline is generally considered vegan. The “animals” in gasoline have been dead for millions of years, and they were not killed for human use. However, some vegans may avoid fossil fuels like gasoline for environmental reasons. Also, car tires and roads often contain animal ingredients.

Below, I’ll further explore whether gasoline is ethical from a vegan perspective. We’ll also look at related issues around veganism and driving—including the animal fats in biodiesel, and something else that kills 6 million dogs per year.

Can Vegans Use Gasoline?

Below, I’ll discuss the actual composition of gasoline and its origins. But first, let’s answer the practical question of whether vegans can use gasoline and other kinds of fuel.

The practical answer is yes—vegans can use gas (a.k.a. petrol). But why?

Well first, let’s refer to the definition of veganism… While there may be a few definitions of veganism out there, the most common one is from the Vegan Society. I’ve bolded some key words:

“Veganism is a philosophy and way of living which seeks to exclude—as far as is possible and practicable—all forms of exploitation of, and cruelty to, animals for food, clothing or any other purpose…”

– “Definition of veganism” by The Vegan Society

That is a crucial point when it comes to something like gasoline. While it’s true that gasoline is partly derived from dead animal tissue, those animals died millions of years ago. And it wasn’t human exploitation or cruelty that caused their deaths.

It’s not like gasoline was made from factory-farmed dinosaurs or something!

(That said, can you imagine a sequel of Jurassic Park where humans start milking dinosaurs and frying up dinosaur eggs? Dr. Ian Malcolm—played by Jeff Goldblum—would not be happy about it!)

Other Vegan Problems With Petroleum

As I explained above, the animal-derived nature of gasoline is not actually a problem for vegans. But that doesn’t mean that all vegans are super on-board with petroleum and fossil fuels.

The use of petroleum has at least 3 big pitfalls when it comes to the environment:

Think of issues like oil spills and pipeline ruptures. There are hundreds of pipeline incidents each year in the U.S. alone, many of which cause human fatalities, too, not just harm to nonhuman animals.

There are a few funny scenes in the movie I Heart Huckabees where one of the environmentalist characters, played by Mark Wahlberg, rants about the problems with petroleum.

I don’t recall if Wahlberg’s character was vegan, but it would make sense if he was.

Is Gasoline Actually Made of Animals?

You may have heard that gasoline is made of dinosaurs. But does that hold up to scrutiny, or does it just sound cool?

The best sources I can find seem to claim that petroleum was formed primarily from phytoplankton, zooplankton, algae, and bacteria. So, we’re talking much smaller organisms, single-celled in many cases. Not big dinosaurs. (source)

Now, if you look at that list of what primarily makes up petroleum, there’s only one group of animals: Zooplankton.

What exactly is zooplankton? It includes tiny marine animals like krill and sea snails. It also includes some young fish, invertebrates, and jellyfish (source). Zooplankton are fascinating—they participate in the largest migration on Earth on a daily basis.

So, anyway—if you’re wondering whether gasoline is made of animals… well, it is partially made of zooplankton that died millions of years ago.

From what I can tell, normal diesel fuel would be vegan to the same extent as gasoline, as it is another petroleum product. However, there’s an interesting side issue here: Biodiesel.

Biodiesel is made from natural and renewable resources. While these can be plant ingredients like soybean oil, they can also be animal fats like tallow, lard, chicken fat, and fish oil. (source)

So, I’m not going to pretend to be an expert on biodiesel, but do take note that it is often derived from animal fat that comes from the meat industry.

This is different from gasoline that’s just derived from zooplankton from millions of years ago. Biodiesel may actually financially support the meat industry, which actively kills animals today. So there’s a stronger case to argue that biodiesel is not vegan.

What if you take a look beyond gasoline and fuel, and we ask whether cars themselves are vegan? There are actually a few more questions that arise:

So, again, vegans can drive cars… But some ethical vegans may prefer to limit or avoid driving for any of these reasons. LiveKindly actually published a whole vegan guide to buying a car, for vegans who want to drive ethically.

Also, as noted above, many vegans are environmentalists. So many vegans may just prefer electric cars, hybrid cars, bicycles, public transit, car pooling, or other sustainable options.