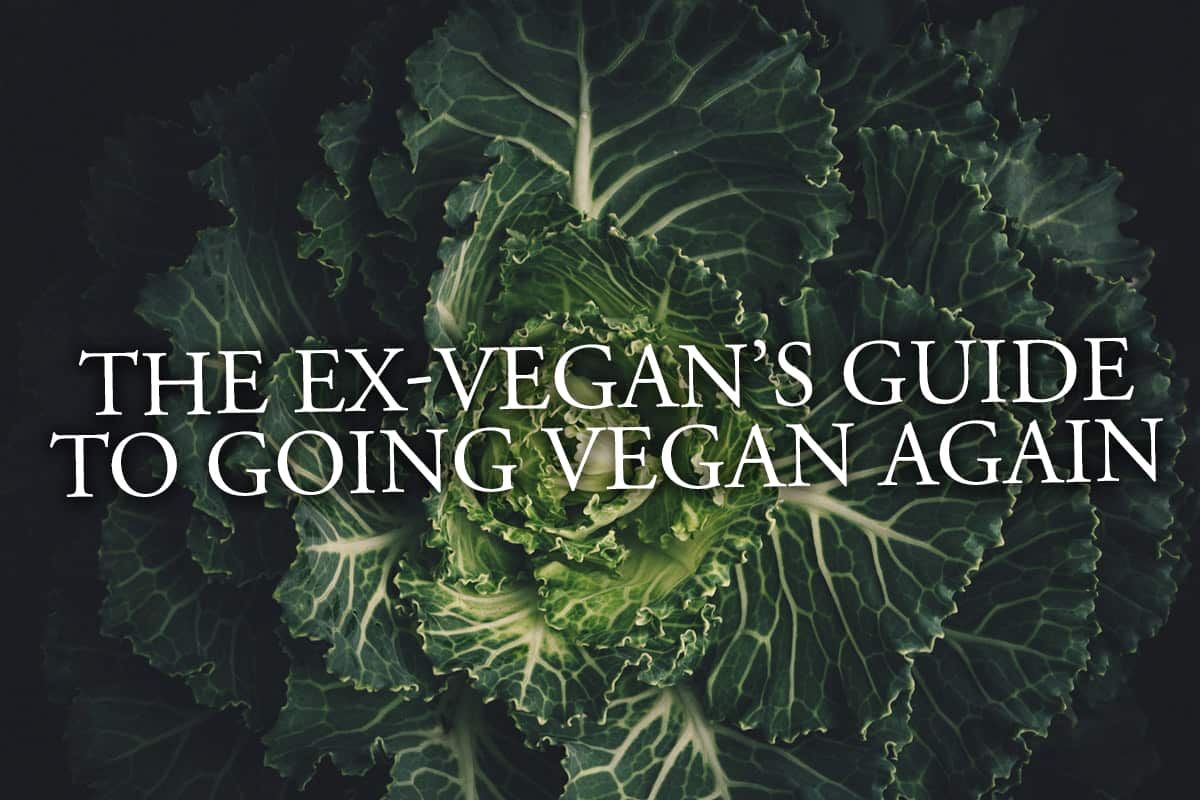 I’ve seen a statistic claiming that over 80% of vegans end up quitting. I don’t know if that statistic is accurate or not, but I know it does happen often. But I also know many ex-vegans eventually decide to try going vegan again. And I wanted to make a post to help those of you ex-vegans out.

So, how should you go about going vegan again? As an ex-vegan, the key to going vegan again is fixing what went wrong last time. The most common reasons vegans quit are social isolation, burnout from doing too much, forgetting why you’re doing it, and nutritional problems. All these can be fixed when going vegan again.

This post will help you formulate a game plan to be successful when going vegan again. I’ll cover four of the most common reasons why people quit being vegan, and I’ll cover how to fix those to make sure you can go vegan for the long-run this time.

Ask Yourself This Question Before Going Vegan Again

The question you need to ask yourself is this: What went wrong with your vegan diet last time?

If you want to be successful with a vegan diet this time, you need to identify what went wrong before and try to prevent that from happening again. See if you can identify any points from the following list, or anything else you experienced that you could fix when going vegan again this time.

1. Lack of vegan community or friends. Maybe it got lonely being the only vegan at the party, the only vegan in your house or your friend group. Did your friends mock you or feel alienated or inconvenienced by your vegan diet?

2. Burnout from trying to do too much at once. You might get overwhelmed if you’re trying to go from being a meat eater to a vegan all at once. Maybe you’re also trying to switch to other healthy or environmentally friendly life choices too. You might feel like you’re failing and you might just give up the whole thing.

3. Forgetting why you’re doing it. A lot of people go vegan after watching a documentary or reading an article about vegan issues, but then after a few weeks, the information becomes a little more distant and easy to forget. So they let it go.

4. Nutritional gaps. Some vegans run into problems with iron, vitamin D, calcium, vitamin B12, or other specific nutrients. Did veganism affect your health negatively the first time, and were you able to identify the specific problem? Did you have vegan farting problems?

Next I’ll list out four corresponding actions you can take to prevent these problems from happening again on your vegan reboot!

If you’re at a university, see if there is an animal rights group, vegetarian group, or vegan group. If so, start by going to a meeting and seeing what they’re up to!

You can also find vegans in your area through Facebook groups or through Meetup.com. Search the name of your city, state, region, etc, and then the word “vegans” and see what comes up!

You can also try to convince your family members and friends to try going vegan with you. Have them watch a vegan documentary with you, and maybe propose the idea of going vegan for 30 days as a challenge. For many people, if the 30 days go well, it will be easy enough to convince them to stay vegan with you.

If none of those options seem to be working, you can at least start posting in vegan forums online, like Reddit, for example. This will give you some connection to other real vegans. You can ask questions from experienced vegans and just share your experiences, relate to each other, etc. it’s good to have friends around any new endeavor you’re embarking on.

Twitter, Instagram, and other social networks also have communities of vegans. Many people on those sites are open to meeting new people—so send comments and messages to fellow vegans and see if you can find some vegan buddies online!

2. Take It Slow. Be Easy on Yourself If You’re Not Perfect.

A lot of people have a sort of perfectionist attitude about going vegan or a mentality that veganism is actually about the purity of removing your support 100% consistently from animal-exploiting industries. This can lead to guilt and maybe even hopelessness when you slip up. Some vegans will just ditch the goal altogether, thinking they already failed at it.

I have a whole separate post about vegan slip-ups that you should definitely check out if this has been an issue for you. Overall, just know that vegan slip-ups are not a big deal. What’s most important is just learning from the experience and getting back on track.

When going vegan again, try to be more forgiving when you slip up. Recognize that you won’t be perfect at it, and keep going anyway.

Some people find it much more doable to gradually transition into a vegan diet, rather than going vegan all at once. If that honestly feels more doable to you, then maybe try it this time!

Go for vegan breakfasts or vegan lunches, and allow any food for the other meals. Or try vegan weekdays but more flexibility on the weekends. Or vegan-at-home but flexible when you’re out and about.

Being mostly vegan for the long-term will have more impact than being perfectly vegan for a week and then burning out and quitting. So take a long perspective. Don’t worry about purity or perfection. Work on moving in the direction you want to be going in the long run.

Vegan documentaries, podcasts, and books can help you remember why you’re going vegan again and stick with it.

If you keep educating yourself and immersing yourself in that information, it’s going to have a major effect on the motivation and inspiration you feel to keep being vegan. These lists are just a small sampling of what is available:

Vegan books to read (links are to Amazon):
• How Not to Die by Dr. Michael Greger
• The China Study by T. Colin Campbell and Thomas Campbell
• Becoming Vegan by Brenda Davis and Vesanto Melina
• Proteinaholic by Garth Davis
• Animal Liberation by Peter Singer
• Eating Animals by Jonathan Safran Foer

Another thing that could help is writing out your own thoughts about why you’re doing this and what the benefits are or have been along the way.

You could start an Instagram account or blog to track your own progress as a new vegan and connect with others. Or just keep a private journal to yourself.

However you do it, writing helps you remember and take ownership of ideas that are bouncing around in your head and otherwise might bounce out over time and be forgotten. So write about why you’re doing this.

4. Cultivate an Interest in Vegan Nutrition.

If it was a health or nutrition issue that stopped you last time, really be sure to address that issue this time, whether with significant diet changes or with supplements.

Here are two quick suggestions that could help you quite a lot:

If you want the best assistance, you can find a registered dietitian in your area who is familiar with vegan diets. Vegan diets are becoming more common, so this shouldn’t be hard to find. If paying for a dietitian’s help is not an option, you can also learn about vegan nutrition on your own.

Reading a book like Becoming Vegan by Brenda Davis can be a practical way to get a good overview of potential deficiencies and what to be looking out for as a vegan. If you prefer online resources, you can watch videos on NutritionFacts.org or browse on veganhealth.org. Or again, the Nutriciously free course and e-books.

How do you turn nutrition into a passion of yours? Here’s one tip: Don’t just focus on correcting the problems in your diet, but instead, focus on all the benefits of a healthy diet. Focus on the better energy or better physique you will have!

For example, read my article about getting 6-pack abs as a vegan. I’ve done it, and you can, too.

What Worked Well From the First Time You Went Vegan?

Even though your first attempt at going vegan (and maybe even subsequent attempts) did not last, that doesn’t mean they were necessarily a complete trainwreck. What went well?

What did you really enjoy, and what helped you stay on track when you used to be vegan?

What from your past attempts do you think is worth integrating into your new plan for going vegan again? This kind of reflection is key to building a vegan plan that works for you going forward.

Take all the notes and ideas you have from asking the questions above, and try to make a more solid plan for going vegan this time.

You still may run into hiccups along the way and have to address them. Don’t be afraid of failures and slip-ups as a second-term vegan. It’s your long-term impact that matters—not getting it perfect immediately or 100% consistently.

Build your game plan as far as what you’ll eat, how you’ll connect with other vegans, how you’ll ensure your nutrition is on point, or how to address other problems you’ve faced before. And then dive back into this positive lifestyle as a new vegan (again)!