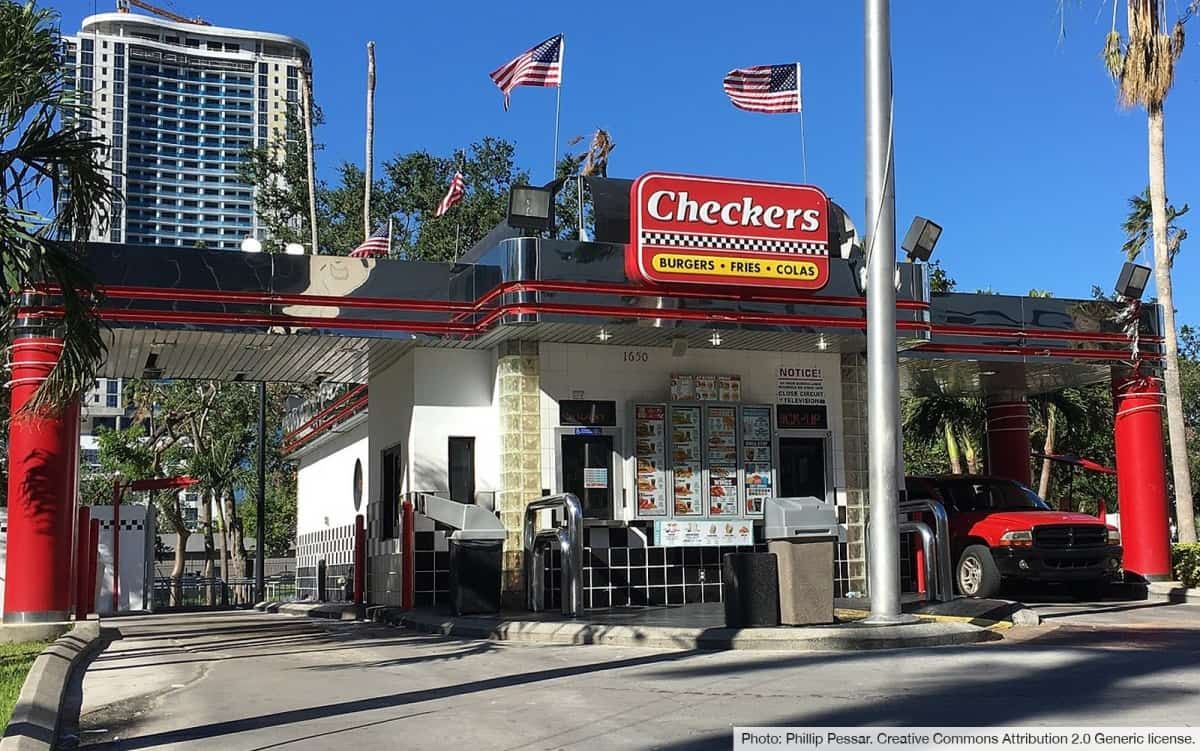 If you’re vegan and you’re planning to go to Checkers or Rally’s, I just want to start by apologizing on the restaurant’s behalf. Checkers/Rally’s is literally the single least vegan-friendly chain restaurant I have ever reviewed, after writing over 75 guides!

Below, I’ll explain why there are so few vegan options at Checkers. I’ll list the specific sauces that appear to be vegan. And I’ll answer some common questions about whether Checkers has a veggie burger, whether their fries or apple pie are vegan, and more!

The following vegan menu was compiled with the help of the normal menu and allergen menu on the Checkers website. I also consulted some other posts by vegan bloggers.

Just to be clear: Rally’s and Checkers are the same restaurant chain since 1999. This means anything in this post should apply to both Checkers and Rally’s locations.

Restaurant menus change and often vary by location. I recommend double checking any important information with staff at your local Checkers or Rally’s!

The Fanta Slushies at Checkers or Rally’s are vegan. There are three flavors typically available:

Note: The “Big Surf Slushies” are not vegan, as they contain milk ingredients. So be sure to get the Fanta Slushies, not the Big Surf ones.

You can also get the typical vegan soft drinks at Checkers. Mainly it’s Coca-Cola products. Here’s a summary based on the information I found on their website:

Lastly, I’ll note a few extras that are vegan. But there’s not really any vegan dish to use these sauces and toppings on… So, they probably won’t sound that appealing on their own!

It’s possible they might have some additional options at your location. I’d expect that some other veggie toppings like lettuce and tomato might be used but just aren’t listed in the allergen menu. Same goes for the hamburger bun or other small extras that aren’t sold directly on the menu.

Remember not to feel awkward or embarrassed to ask about the details of their vegan options. Employees should know this information or be willing to help you find it, as it’s important for lots of customers who have allergies and other dietary requirements.

Let’s answer a few common questions about eating vegan at Rally’s or Checkers.

The Fries at Checkers or Rally’s are not vegan. First of all, they contain milk ingredients, as is clearly indicated in the allergen menu.

In addition, I’ve seen a report back from a previous Checkers employee that all their fried foods are cooked used animal fat (lard). So that would also make Checkers fries non-vegan and, depending on your definition, non-vegetarian, too.

I’ve also seen some old blog posts, including from PETA, that refer to Rally’s fries containing egg. However, that is no longer the case, according to Rally’s allergen menu. Checkers fries appear to be egg-free but not dairy free currently. (source)

Checkers Apple Pie is not vegan, as it contains animal fat. This is visible in the nutritional info document published by Checkers, as it lists the Apple Pie as containing a small amount of cholesterol.

Does Checkers Have a Veggie Burger?

Does Checkers Have Vegan Ice Cream?

Checkers does not have vegan or dairy-free ice cream. If you see ice cream at Checkers/Rally’s, it is real dairy ice cream.