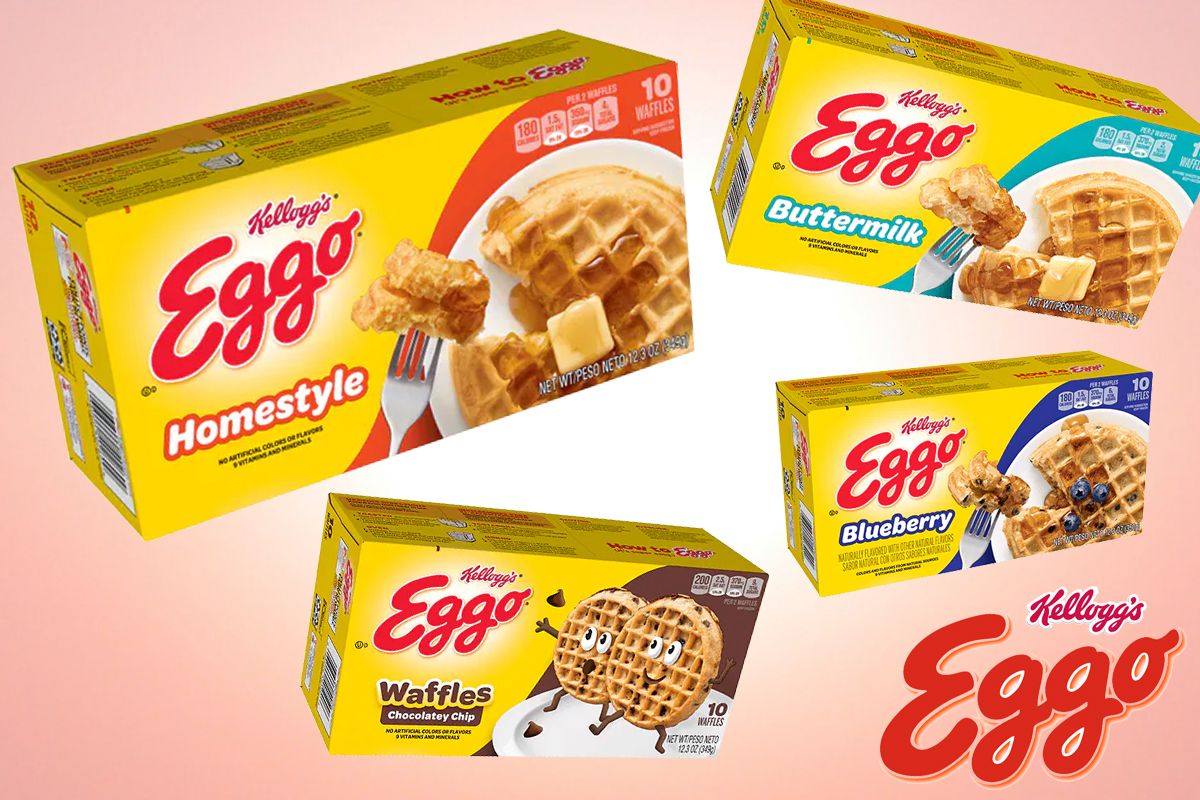 Did you know: Eggo was originally a mayonnaise brand. Really! Only later did the company expand into their now-famous waffles. They’re super convenient—much faster than homemade waffles. But how do they stack up nutritionally? Are Eggo waffles healthy?

Eggo waffles are not very healthy. The main ingredients are processed white flour, vegetable oil, and in many flavors, sugar. They contain a considerable amount of sodium (about 350mg in two waffles) and almost no fiber.

Are Eggo Waffles Good for You?

Here are the eight specific questions I’ll be answering about Eggo waffles nutrition. Click any of them to skip ahead to that section—or just keep scrolling to read them all:

1. What Are Eggo Waffles Made Of?

Let’s start by looking at the actual ingredients found in Eggo waffles. Then we can assess if they are “processed food” or not.

Here are the ingredients for four popular Eggo waffle flavors:

Eggo waffles are processed food. Other than water, the main ingredients in most Eggo waffles flavors are white flour, vegetable oil, and sugar. These ingredients are highly processed, high in calories, and low in fiber.

Keep in mind: The exact balance of these processed ingredients varies by each Eggo flavor. In the Buttermilk flavor, there are actually more buttermilk, eggs, and leavening than sugar. (We’ll compare exact sugar amounts below.)

But in general, Eggo waffles do not contain many whole food ingredients. They contain some animal-derived ingredients like eggs and dairy… but even those are calorie-rich and arguably not the healthiest.

Eggo waffles are probably not the best choice for weight loss. Eggo waffles are mainly processed carbs, without much fiber, so they’re not likely to keep you feeling full and satisfied in a calorie deficit. But like any food, they can be eaten in moderation while dieting.

To check whether a food is “fattening,” the best single thing we can consider is probably calorie density. That is, how many calories does a given weight or volume of the food have? It can be expressed in figures like “calories per 100g.”

But you can also just use some common sense. Processed ingredients like flour, oil, and sugar raise the calorie density for a food. That’s because the fiber is typically removed, and you’re left with only the part containing calories.

Since flour, oil, and sugar are three of the main ingredients in Eggo waffles, we would expect them to have high caloric density. Meaning, you would get a lot of calories before necessarily feeling that full.

Another factor to look at is fiber. Fiber helps with weight loss by filling you up, reducing appetite, and improving your healthy gut bacteria. (source)

We’ll cover fiber in more detail below, but spoiler alert: Eggo waffles don’t have much fiber. And that is typical of processed foods containing white flour—a lot of the natural fiber has been removed in processing.

Of course, if you eat your Eggo waffles in moderation, they can still be part of a weight loss diet. Your total calorie balance is what matters most. But eating processed foods like Eggo waffles could make it harder to feel satisfied while staying in a calorie deficit.

For more weight loss tips, check out these 18 tips for weight loss without counting calories.

4. Are Eggo Waffles High in Carbs and Sugar?

Eggo waffles have around 30 grams of carbs in each two-waffle serving. The amount of sugar varies by flavor, from 2g to 9g in the flavors we checked. The Buttermilk flavor had the lowest sugar, with about 1g of sugar per waffle. Eggo waffles are not low-carb.

Eggo waffles are not made for keto or other low-carb diets. They’re not “protein waffles” or anything like that. They’re basically normal waffles—just made to be frozen and convenient. So they’re pretty high in carbs.

The numbers below are for each two-waffle serving:

5. Are Eggo Waffles High in Cholesterol?

That said, there are still dietary aspects that affect your blood cholesterol. Specifically, it seems that trans fat and saturated fat intake tend to raise LDL (“bad”) cholesterol. (source)

So, it may be more important to consider the saturated fat content of Eggo waffles (and all your meals)—not the dietary cholesterol.

That said, Eggo waffles are not crazy high in saturated fat, either. The flavors I checked had between 1.5g and 2.5g of saturated fat in two waffles. That’s only 8% to 13% of the daily value for saturated fat. So, it’s not a ton.

In summary, Eggo waffles don’t seem to be that bad for cholesterol—but they contain a little dietary cholesterol and a little saturated fat.

6. Are Eggo Waffles High in Fiber?

Eggo waffles are low in fiber, with less than 1 gram of fiber in a typical two-waffle serving. Whole grain waffles often have over four times as much fiber.

It’s no surprise that Eggo waffles are low in fiber. When you look at the ingredients list, it’s mostly processed ingredients (like white flour) that have the fiber removed.

If you choose a whole grain waffle, you could be getting over four times the fiber. Here is a comparison with just one brand I checked:

You can also make homemade whole grain waffles with a recipe like this one.

7. Are Eggo Waffles High in Sodium?

If you get too much sodium in your diet, it can lead to high blood pressure and increased risk of heart disease and other problems. Eggo waffles are not extremely high in sodium—canned soup and TV dinners have more.

But they do have a significant bit of sodium to your diet. So if you’re having multiple servings in a day, it could add up pretty fast:

Eggo waffles are not vegan. They contain both eggs and dairy ingredients.