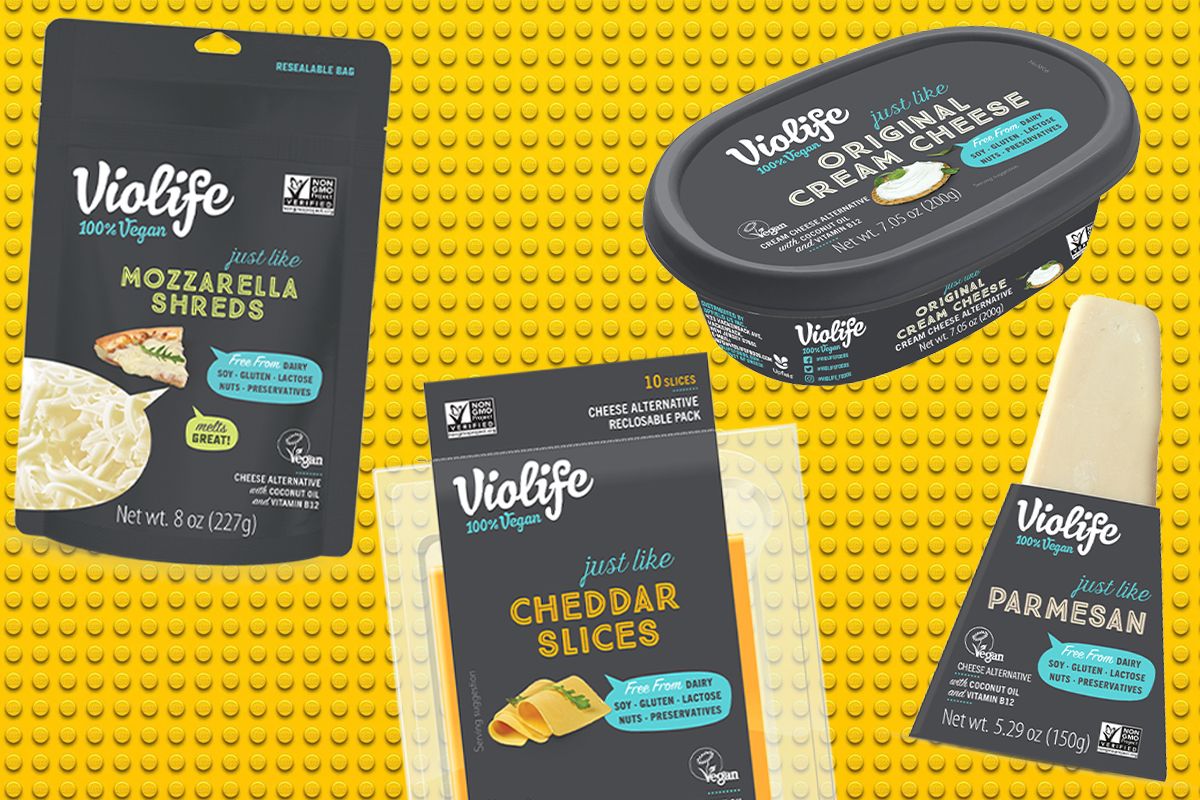 As a vegan of 14 years, I’m always happy to see more “vegan cheese” options arrive in stores. But just because something is vegan doesn’t mean it’s healthy. Today, let’s look in-depth at one vegan cheese brand—Violife—and see how it stacks up nutritionally.

Violife vegan cheese has similar amounts of calories, saturated fat, and sodium as real cheese—but without the calcium of real cheese. It is mostly made of processed oil and starch. It is not the healthiest choice. However, Violife cheese is dairy-free, soy-free, nut-free, gluten-free, and fortified with vitamin B12.

Below, I’ll look closely at the ingredients in Violife to answer whether it counts as a “processed food.” Then I’ll compare Violife side-by-side with Kraft and other leading brands of real dairy cheese. I’ve got some pretty interesting findings to share!

Is Violife Cheese Good for You?

Here are the seven specific questions I’ll be answering about Violife nutrition. Click any of them to skip ahead to that section—or just keep scrolling to read them all:

1. What Is Violife Cheese Made Of?

Let’s start by looking at the exact ingredients in Violife cheese. I’ve chosen four of their most popular products, just to get a broad sampling.

Here are the ingredients, and I’ll share my analysis below:

When it comes to whether a food is “fattening,” the best single thing we can look at is probably calorie density. This is a measure of how many calories are contained in a given mass or volume of the food. It can be expressed in statistics like “calories per 100 grams.”

But when we’re comparing similar products, we can typically just compare calories (as long as the serving sizes are the same). So let’s look at the calories in Violife cheese vs popular brands of real dairy cheese.

As you can see, they have the same amount of calories, so a very similar calorie density.

Again, the Violife cheese has the same calories as real cheese.

But we’ll see something different with the cream cheese:

With the cream cheese, Violife is a bit lower in calories than real cheese. But not by much.

And here again, Violife is a lower-calorie option. This time, the difference is a bit more significant, too.

Overall, Violife has around the same amount of calories as real cheese. However, some of their products—especially the parmesan wedge—are lower in calories.

One of the reasons why cheese is commonly said to be unhealthy is its saturated fat content. In fact, cheese is reported to be the biggest source of saturated fat in the American diet.

You might assume that vegan cheese would be lower in saturated fat. After all, most plant-based fats are unsaturated.

And indeed, when you look at other brands of vegan cheese—like Daiya and Follow Your Heart—they are generally lower in saturated fat than real cheese.

But you actually can’t say the same about Violife. This is because Violife is made from coconut oil, which one of the few sources of plant-based saturated fat.

Keep in mind: Saturated fat from some sources may be healthier than others. I do not mean to necessarily equate coconut oil with dairy fat by making these comparisons.

Anyway, let’s compare the saturated fat content of Violife to real cheese—starting with the mozzarella:

I was surprised to see that Violife has about 70% more saturated fat than Kraft when it comes to mozzarella shreds.

Once again, Violife has significantly more saturated fat than Kraft—this time around 60% more.

Next, we look at the cream cheese:

Here, Violife has about 33% more saturated fat than the leading brand of real dairy cream cheese.

Lastly, let’s look at the parmesan:

And once again, Violife has more saturated fat, although not by much this time.

4. Is Violife Cheese High in Sodium?

Most Violife cheese products have similar sodium content as real dairy cheese. Violife’s Just Like Parmesan Wedge is one of their products highest in sodium, with 390mg of sodium per 1-ounce serving.

Too much sodium can your raise blood pressure and increase the risk of heart disease, stroke, and many other complications. So it’s worth checking the sodium content of the foods you eat, especially processed foods.

Some cheese products are quite high in sodium. So how does vegan cheese like Violife compare? Let’s start by looking at the mozzarella:

As you can see, Violife’s mozzarella has more sodium than Kraft—but it’s only about 27% more.

With the cheddar slices, Violife has 33% less sodium compared to Kraft.

How about when it comes to cream cheese?

Lastly, let’s look at the parmesan:

Overall, there’s no clear pattern of whether Violife cheese has more or less sodium than real cheese. It varies by product. Neither Violife nor their dairy competitors are super low in sodium across the board.

5. Does Violife Cheese Have Calcium?

Violife cheese does not have calcium. This is probably the one area of nutrition where Violife clearly loses to real cheese. Violife has fortified vitamin B12 in their products—but not fortified calcium.

And it’s actually a significant amount of calcium you could be getting from real cheese, as we’ll see below. Here’s the comparison for mozzarella:

Next, here’s the comparison for cheddar slices:

And finally, the parmesan—the most stark comparison yet:

The pattern is clear: Violife cheese doesn’t have calcium. Meanwhile, many kinds of real cheese are significant sources of calcium.

Violife cheese is free from dairy, soy, gluten, lactose, and nuts. The main ingredients are coconut oil and food starch (mostly from potato and corn). Violife is not a nut-based or soy-based cheese.

Violife cheese is confirmed vegan. In fact, their website and packaging include the tagline “100% Vegan.” Their products are dairy free, egg free, and contain no animal ingredients.

If you’re new to the world of vegan cheese, it’s worth noting here that not all “veggie cheese” is vegan. Occasionally, you’ll find a “Lactose Free” cheese that still contains dairy proteins or ingredients like rennet (enzymes that are animal-derived).

But rest assured, Violife is not one of these sneaky non-vegan cheeses. Violife is completely vegan.