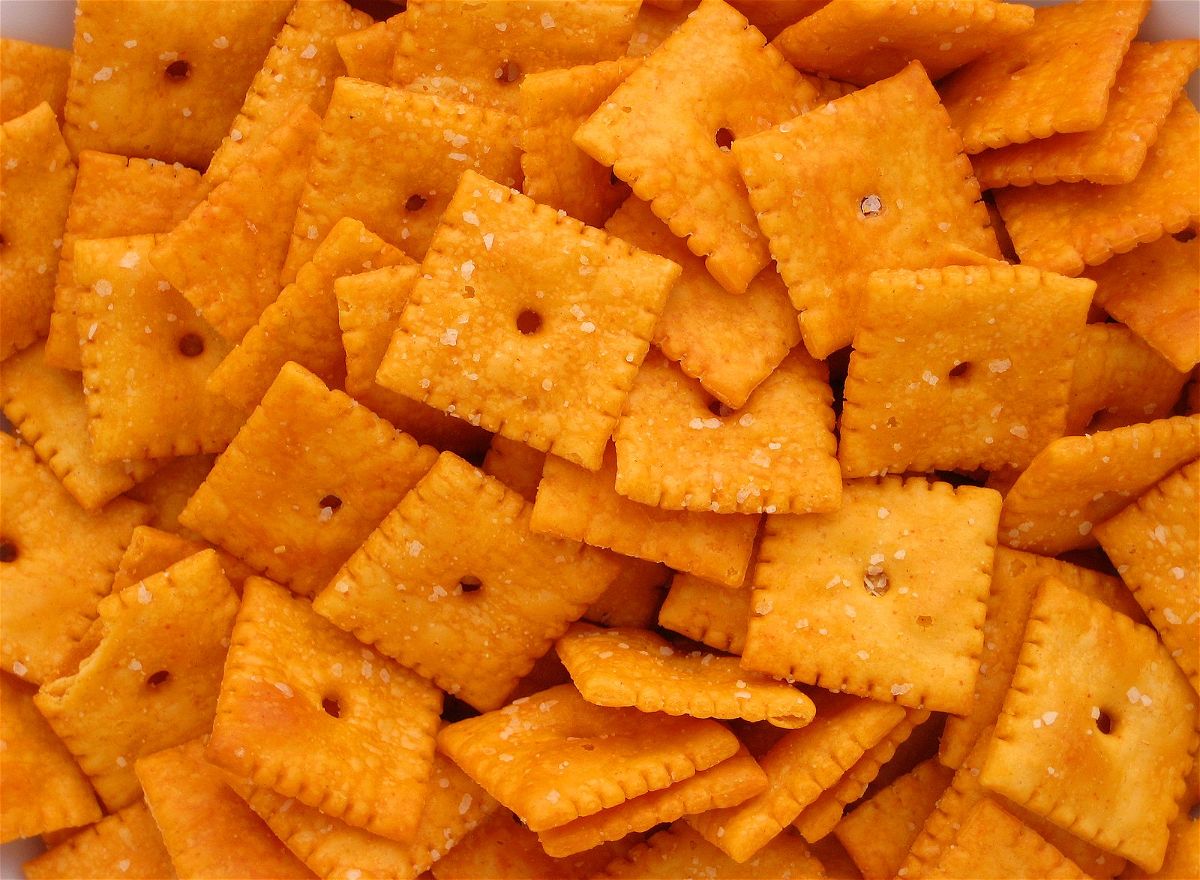 Some people think Cheez-Its are healthy just because they have “real cheese.” But cheesecake has real cheese, too—and nobody thinks cheesecake is healthy. So, today let’s take a closer look: Are Cheez-Its actually healthy?

Cheez-Its are not the healthiest snack. The two main ingredients are processed white flour and vegetable oil, and each serving has less than 1g of fiber. Cheez-Its also have TBHQ, a controversial food preservative linked to tumors and paralysis in some animal studies.

Below, I’ll take a close look at the ingredients and nutrition facts for Cheez-It Crackers. I’ll compare them with other popular snacks (like Goldfish), and we’ll explore whether they’re good for weight loss, too!

Are Cheez-Its Good for You?

Here are the 12 specific questions we’ll answer about Cheez-Its nutrition. Click any of them to skip ahead—or just keep scrolling to read them all:

1. What Are Cheez-Its Made Of?

Let’s start by looking at some actual Cheez-Its ingredients. Do they contain anything you should be avoiding?

So, what are the “bad ingredients” in Cheez-Its? Well, processed flour and oil, mostly. They give you calories without many nutrients. That’s classic “processed food” for you.

That said, it’s not just the list of ingredients that matter. The quantity of each ingredient also matters. So in the next sections, let’s look at the actual amount of carbs, fiber, sodium, and other nutrients in Cheez-Its.

2. Are Cheez-Its High in Carbs?

Here’s a table showing the sugar and carb content for Cheez-Its, compared to Goldfish and other snacks:

Cheez-Its are the lowest in carbs here—but it’s not enough to make a significant difference for most low-carb dieters and others tightly controlling their carb intake. That said, Cheez-Its at least avoid the sugar content that Wheat Thins have.

3. Are Cheez-Its High in Fiber?

Cheez-Its are low in fiber, with less than 1g of fiber per serving. Cheez-Its are not made with whole-grain flour, but with “enriched flour,” which is processed and has most of its fiber removed. This makes Cheez-It crackers generally less healthy.

Some other cracker brands, like Triscuits, actually use whole grain wheat as their main ingredient. So there’s a bit more fiber in those (about 3 grams per serving).

Here is a table showing the fiber content of Cheez-Its, compared to other snack crackers:

In my opinion, this is one of the big failings of Cheez-Its. Most people don’t eat enough fiber, and it’s a big key to improving your nutrition. That said—if you’re on a low-fiber diet for any specific reason, then it could be a plus.

4. Are Cheez-Its High in Sodium?

Cheez-Its have a moderate amount of sodium, with 230mg per serving (of 27 crackers). That’s about the same sodium content as a serving of Goldfish crackers or Wheat Thins. Currently, a low-sodium flavor of Cheez-Its is not available.

Here’s a table showing the sodium content of Cheez-Its, compared to other crackers:

As you can see, all these crackers are pretty similar when it comes to sodium. But Triscuits are a little better—and they are a bit of a healthier cracker overall, with more fiber, too. See my review of Triscuits here.

You might be tempted to check if Reduced Fat Cheez-Its are any lower in sodium… but unfortunately, they’re not. In fact, they have slightly more sodium than Original Cheez-Its, with 250mg per serving.

Glycemic index refers to how dramatically a source of carbs spikes your blood sugar. I was unable to find peer-reviewed research directly on Cheez-Its glycemic index. However, we can make some inferences here.

As reported by Harvard Health, “most crackers” qualify as high-glycemic foods. Some high-fiber crackers may be exceptions from this… But Cheez-Its don’t have any significant fiber content (as covered above).

The carbs in Cheez-Its come primarily from enriched flour, which is a high-glycemic ingredient.

Therefore, we can likely assume that Cheez-Its would test as a high-glycemic food. At the very least, I’d advise to take caution with Cheez-Its, if blood-sugar control is important to you.

6. Are Cheez-Its Fried or Baked?

Cheez-Its are baked, not fried. However, Cheez-Its still contain processed vegetable oil. They are not a low-fat food.

Many people understand that baking is healthier than frying because less oil can be used. But don’t assume too much. Cheez-Its still have 8 grams of total fat per serving, a good portion of which comes from the oil. Almost half of the calories in Cheez-Its come from fat.

If you’d like to go for a lower-fat option, you can get Reduced Fat Cheez-Its. They have about 25% less fat than the Original flavor, with 6g of total fat per serving.

7. Are Cheez-Its Good for Weight Loss?

Cheez-Its are not the best food for weight loss, as they have multiple high-calorie ingredients like enriched flour, vegetable oil, and cheese. These ingredients give Cheez-Its a high calorie density. However, Cheez-Its can still be eaten in moderation on a weight loss diet.

One of the foods with the highest calorie density is vegetable oil. Refined sugars and flours have high calorie density, too. These foods are concentrated sources of calories, as much of the fiber and bulk have been removed in processing.

Animal foods like meat, eggs, and dairy also tend to be high in calories, due to their high fat content.

Cheez-Its have several ingredients with a high calorie density—vegetable oil, flour, and cheese—so there is a risk of overeating them.

Another thing to consider is the relative lack of fiber in Cheez-Its. Other snacks could help fill you up with more fiber and keep you better satisfied on a weight-loss diet.

As covered above, Cheez-Its likely rank high on the glycemic index, meaning their carbs are quick to digest. Foods with more fiber and lower GI scores could help you to stay full longer, without needing to keep eating more throughout the day.

So, can Cheez-Its make you fat? Yes, they could contribute to weight gain. But by itself, a few servings of Cheez-Its will not ruin your weight loss diet, either. Weight loss depends on your overall diet and lifestyle.

If you’re burning more calories than you’re eating each day/week, you should lose weight. Eating Cheez-Its or other “processed foods” on occasion will not automatically ruin your diet, as long as the overall calorie deficit remains in tact.

It’s widely understood today that healthy food tends to be minimally processed. When we eat food in its more natural forms, we get more nutrients and fiber than if it’s been processed into flour, flakes, syrup, or oil.

The term “processed food” is not very precise, though. Technically, even if you just cut a banana in half, you’ve “processed” it. But that’s not what most people mean when they say “processed food.”

Cheez-Its do have real cheese made from skim milk… But they also have processed flour and vegetable oil as the main ingredients. It’s debate-able whether Cheez-Its count as “junk food” or “ultra processed,” but they are clearly processed food, at least.

9. Are Cheez-Its Healthier Than Goldfish?

Here’s a table comparing the Original flavors of Cheez-Its and Goldfish in several key nutrition areas:

As you can see, these crackers are very similar nutritionally, with the exception that Cheez-Its are higher in saturated fat. Most health authorities recommend limiting saturated fat, so this may be a small point for Goldfish.

Cheez-Its and Goldfish have very similar ingredients, too. They’re both mostly made of processed flour and oil. But Cheez-Its may have a bit more milk/cheese content. How do we know that?

So, there may be more dairy in Cheez-Its than Goldfish. But in any case, the nutritional profile is very similar between these two snack crackers. And neither one is very healthy.

Note: There are different flavors of both Cheez-Its and Goldfish. So, please take that into consideration. The comparison could look different if you choose a Whole Grain flavor of Goldfish, for example.

10. Are Cheez-Its Healthier Than Chips?

Here is a table showing some nutrition facts for Cheez-Its compared to various chip brands. You’ll notice that in all these areas, Cheez-Its looks pretty similar to chips:

The biggest difference is just the ingredients. Most chips are made with corn or potatoes, but Cheez-Its are made with wheat. Cheez-Its also have some real cheese—but not enough to dramatically change its nutrition profile.

Overall, Cheez-Its are not much better or worse than chips. Neither are particularly healthy snacks.

Compared to Original Cheez-Its, each serving of Reduced Fat Cheez-Its has about:

Overall, Reduced Fat Cheeze-Its may be slightly healthier than Original Cheez-Its… But the difference is not significant. They are both mostly made of processed flour and oil, with almost no fiber.

Cheez-Its are not vegan, as they contain real cheese, made from skim milk. However, there are some brands that make vegan crackers with a similar taste and appearance as Cheez-Its: