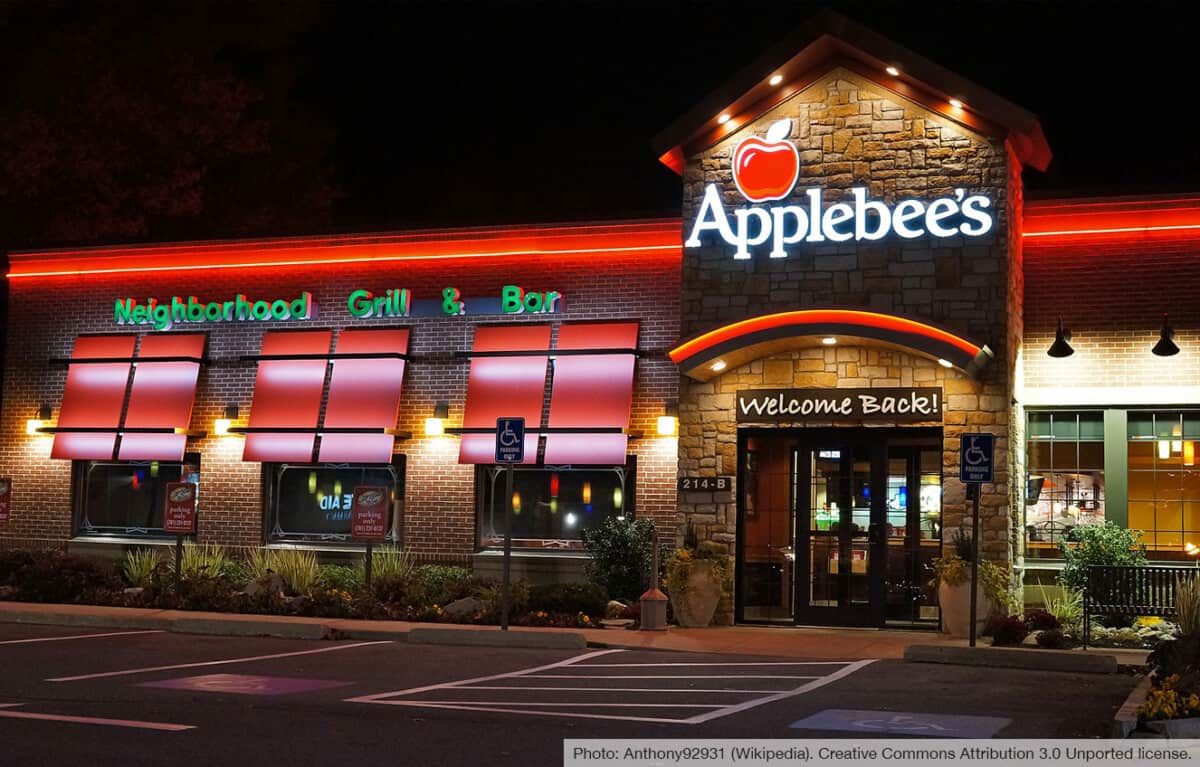 Applebee’s isn’t too bad for us vegans. Unlike some chain restaurants, you can actually get full, and you have a few different options. That said, it requires special ordering and knowing your way around the menu. As someone who’s been vegan for 14 years, I can help you with that.

There are a few other menu items that may be vegan, which I’ll also mention below. I’ll also answer some common questions about Applebee’s pasta and onion rings.

I’ll end the post with a whole-food plant-based guide to Applebee’s, in case you’re trying to avoid processed and fried food, too!

I sent Applebee’s an email to ask about their vegan menu options before making this guide, but I didn’t receive a very helpful reply.

Thankfully, their website has a good allergen menu, so I was able to pull most of the information I needed from there.

Applebee’s has been testing out the Impossible Burger at locations in New York. By the time you read this post, it’s possible they will have expanded that to more locations.

The Impossible Burger is known as one of the most realistic-tasting vegan burgers. That’s because it’s made with genetically engineered heme iron. Heme is what makes meat taste like meat. And Impossible makes heme without needing to kill animals!

Anyway, look for the Impossible Burger hopefully coming to your Applebee’s location soon, if it isn’t there yet.

Note: Often, the chips at restaurants are fried in the same fryer as the chicken or other animal products. If that’s a deal-breaker for you, be sure to ask your server.

Fries are the standard vegan fall-back option for many restaurants. But occasionally, you’ll find restaurants where they are fried in animal fat, like Buffalo Wild Wings.

Note: Often, the french fries at restaurants are fried in the same fryer as the chicken or other animal products. If that’s a deal-breaker for you, be sure to ask your server.

Another potato product—this one’s a little healthier. You’ll have to specifically order the baked potato to be dairy-free, but it shouldn’t be a problem.

You can pair this with some BBQ sauce, ketchup, salsa, or other sauces and toppings (see below). You might also want to pair it with some steamed broccoli (also must be ordered without dairy).

The Applebee’s website says their Crispy Red Potatoes contain no dairy, and I don’t see any other reason they wouldn’t be vegan. This is pretty neat. That said, I’d double-check this one with your server. Make sure they’re not including butter or other animal products.

Broccoli is a vegan side you can find at a lot of chain restaurants because it’s often steamed rather than fried in butter or something.

In this case, the Applebee’s site says there is dairy added into their typical preparation of broccoli, but you should be able to exclude it by request.

There may be multiple salads you can get made vegan at Applebee’s. But a simple option would be to start with the House Salad, remove the cheese and croutons, and pick one of the vegan dressings below.

The fruit smoothies are listed as dairy-free on Applebee’s website. I was surprised and excited to see this. I would definitely double-check with your server about that, though.

This is a fun side, usually part of the kids menu. Makes sense you’d be able to get some apples at Applebee’s!

Plenty of beverage choices for a vegan:

Some of the following items might look vegan at first glance, but after checking the allergen menu, I can tell you they are not vegan:

I’ve also just sent Applebee’s a follow-up email asking about the following dishes, checking whether it’s possible to order them vegan. I’ll update this post if they respond:

Here are some more common questions:

Applebee’s Crunchy Onion Rings are not vegan. They contain dairy.

None of Applebee’s pasta dishes are vegan. The actual wheat pasta they use is likely vegan, but all their pasta dishes contain cheese and/or meat. For vegan pasta at Applebee’s, you’d need to convince them to give you plain pasta, or pasta with a simple marinara sauce (if they have any).

Is Applebee’s Chips and Salsa Vegan?

Applebee’s Chips and Salsa is vegan. However, the chips were likely fried in the same fryer as chicken and other animal products. So if that’s a deal-breaker for you, ask about it.

What if you’re not just eating vegan but trying to also avoid processed and fried foods? Can you eat a whole-food plant-based (WFPB) meal at Applebee’s?

Here’s how I would eat WFPB at Applebee’s:

Probably I’d actually order 2 or 3 of the baked potatoes, and a double order of broccoli, too.

Then I’d potentially add a fruit smoothie, depending on the ingredients. (Sometimes a fruit smoothie is literally just fruit and water, so it’s WFPB. But if there’s corn syrup, sugar, or dairy added, then that’s not going to work.)

The applesauce side from the kids menu is also likely an option, but you’d want to check that it’s unsweetened applesauce.