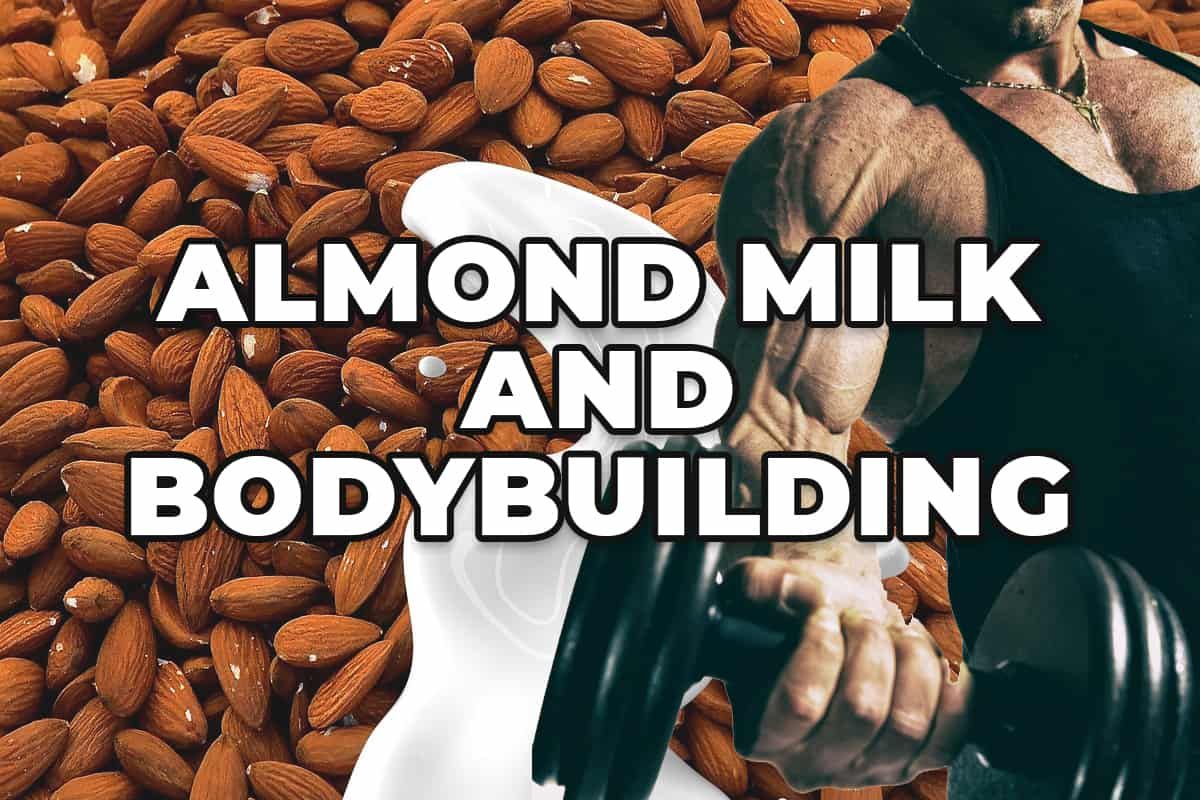 Did you know that a cup of almond milk only contains ~4 almonds? It’s true. Almond milk is mostly just water. That said, how does it stack up against other “milks” from a bodybuilding perspective? Is almond milk good for bodybuilding?

Almond milk is a good choice for bodybuilders while cutting, as the unsweetened version contains only 30 calories per cup. However, almond milk is much lower in protein than soy milk or pea milk. So depending on your goals, it may not be the best vegan milk for bodybuilding overall.

Below, I’ll discuss 5 key factors when looking at almond milk for bodybuilding. We’ll cover protein, calories, hormones, athletic recovery, and more! At the end, I’ll share why I do drink almond milk—even though I don’t recommend it to everyone.

1. Is Almond Milk High In Protein?

Almond milk is not very high in protein. It only contains 1 gram of protein per cup, which is far less than soy milk (7 grams), pea milk (8 grams), or cow’s milk (8 grams).

Which milk alternative has the most protein? Let’s take a look. Here are the protein levels for one cup of various unsweetened plant milks:

As you can see, almond milk is not particularly rich in protein. Really, from the milks I checked, only soy milk and pea milk had similar protein as dairy milk (8g per cup).

Of course, you can remedy this by adding protein powder to your smoothies or anywhere else you add almond milk, really. But if you want more protein from the milk itself, almond milk is not the best choice.

2. Is Almond Milk Good For Cutting?

Almond milk is a great milk alternative for cutting, as it is among the lowest in calories. Unsweetened almond milk has around 30 calories per cup, compared to 80 calories in a cup of unsweetened soy milk, for example.

When you’re cutting, you don’t want to be drinking many calories. Liquid calories won’t really help fill you up. They just use up your total calories allotted for the day. So you want to chose low-calorie or zero-calorie beverages.

This means you’ll probably want an unsweetened milk (if you can handle the bland taste). But when comparing unsweetened options, some plant milks still have two or three times as many calories as others!

So what’s the best vegan milk for cutting? Let’s take a look at the calories in one cup in a bunch of different unsweetened plant milks:

Personally, I always get unsweetened almond milk, especially when cutting. It lets me eat more for fewer calories! That said, sweetened (“Original”) almond milk might be right for you.

My roommate finds unsweetened plant milks way too bland. So he still gets the sweetened ones. If you’re mindful of your overall sugar intake, I don’t think that’s a big problem.

That said, whether you crave sugar in your plant milk may depend on how you use it. If you mainly drink your plant milk in protein shakes, then your protein powder may already be sweetened enough.

For me, I can tolerate bland unsweetened almond milk on my cereal as long as there’s some kind of sweetness in the bowl. If my cereal doesn’t have any sugar, I add fruit to the bowl.

In the end, choose the plant milk that works for you. Try out a few!

Our choice of milk can potentially impact our hormone levels, which can theoretically impact our ability to build muscle. Cow’s milk is known for containing hormones, and many people worry about the effect of soy on estrogen.

Yeral Patel, MD, has said that almond milk is one of the safer options when it comes to milk and hormones. It certainly doesn’t have the skepticism around it that soy milk does!

There are even some people out there who even say almond milk could boost testosterone if you’re low. That’s because it typically contains added vitamin D, along with a bit of zinc. I wouldn’t put too much stock in that, though.

Really, there is no strong reason to suspect that almond milk will significantly affect your hormone levels. It’s mostly just soaked almonds and water. Nothing scary.

There is a sense in which almond milk may not be the best milk choice for recovery… But I would assert that it’s still a decent choice, if you use it intelligently.

Right after a workout, your muscles want protein to repair and build new muscle—along with simple carbs to replenish glycogen levels. For that reason, low-fat milk is actually a decent choice for a post-workout drink: It has protein and sugar!

But almond milk is pretty low in protein, as covered above. And if you’re drinking unsweetened almond milk, then it’s also low in sugar.

Soy milk or pea milk may do more to mimic the benefits of dairy milk for workout recovery. Soy milk and pea milk have protein levels closer to dairy milk. In many ways, almond milk is nutritionally more like water than milk. (source)

That said, you don’t have to just drink almond milk by itself! If you add protein powder to make a shake—or if you pair your almond milk with cereal for simple carbs—then it’ll still do a great job of feeding your muscles after a workout.

So, remember, it’s all about the overall nutritional picture. I like almond milk because it’s low in calories while still being a healthy vehicle for other foods I like (smoothies, shakes, cereal). And I get plenty of protein and carbs from those other foods.

But if you want your plant milk to do real work in your recovery, then consider soy milk or pea milk rather than almond.

Which Vegan Milk Is Best For Bodybuilding?

So, is almond milk good for building muscle? And is there a better choice?

Almond milk is not the most nutritionally dense or nutritionally rich beverage in the world. But it’s healthy and light—kinda like water. And it gets the job done as far as taste and consistency, in my opinion.

With all that said, your personal preference matters, too. So you may just want to choose a plant milk based on taste. They can all get the job done, really.

Many people love the taste of oat milk. Others prefer the taste of coconut milk. I’d suggest trying at least a few before settling on your favorite!