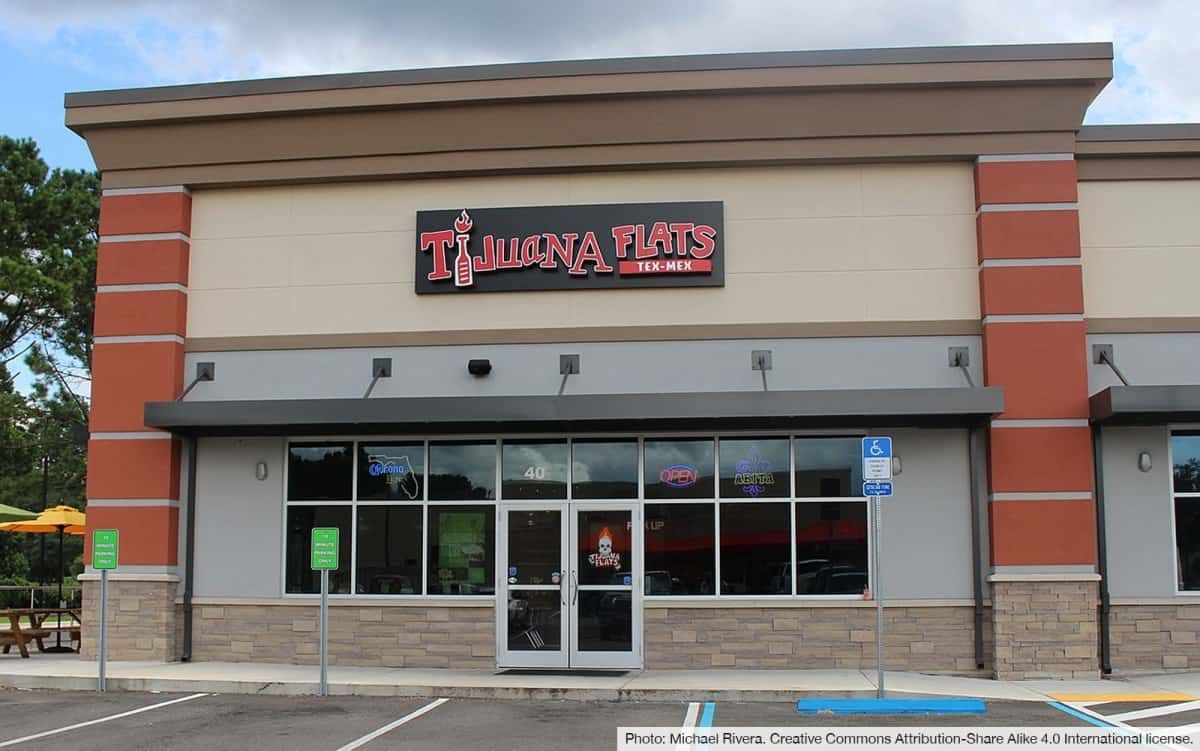 Tijuana Flats doesn’t currently have any vegan meat or vegan cheese. But they actually have a ton of vegan options. This is because they’re very flexible about how you can modify dishes and switch around the vegan ingredients they do have.

Below, I’ll explain how to order each of these items vegan. I’ll also answer some common questions about the refried beans, churros, and more! And I’ll end with a look at how to order a whole-food plant-based (WFPB) meal at Tijuana Flats.

This vegan menu was compiled with the help of the normal menu, allergen menu, and FAQ on the Tijuana Flats website.

Restaurant menus change and often vary by location. I recommend double checking any important information with staff at your local Tijuana Flats!

1. Chips and Salsa (or Guacamole)

However, if you’re getting the “loaded guacamole,” I would just ask to make sure there’s no cheese or sour cream added.

If you want to get fancier yet, look at some of the options down below for “Vegan Nachos.” They don’t have vegan cheese, but you can still put together something pretty cool.

I’m not actually sure whether the standard salad at Tijuana Flats comes in an edible tortilla shell bowl or not. But be aware that the promo picture does show that.

It seems like you can “build your own salad” by selecting from the ingredients below to combine with “Salad Mix”—but I’d ask for No Cheese and No Sour Cream to be sure, as well.

Salad topping/extra options to choose from:

To my knowledge, there is no “veggie burrito” that comes close to being vegan or anything like that. However, you can build your own burrito from scratch with the options below.

Your burrito should also come with a side of chips. You can get the “Chips & Guac” or “Chips & Salsa.” Either one is vegan.

If you’re not familiar with chimichangas, they are basically deep-fried burritos. So you can get pretty much the same options as for the burrito (above) in a chimichanga instead.

Beans and veggies in a tortilla (white or whole wheat), deep-fried—love it!

This is basically two tacos. You’ve got the same filling and topping options as with the burrito (above), but just different shells.

Again, you’ll get a side of chips with either guac or salsa.

Again, this will be pretty similar to the burrito above, but you’re getting the same kind of fillings and toppings in enchilada form.

For the shell, you cna just get the normal “enchilada shell” they have.

And again, you’ll get chips with salsa or guac as a side.

Tijuana Flats doesn’t have vegan cheese. So how do you have a vegan quesadilla without vegan cheese? Well, just smear vegan refried beans in there.

Along with the refried beans, you’ve got the following options.

And again—choose chips and guac or chips and salsa as your side.

You can also get the same fillings and toppings in flautas (a.k.a. taquitos). So you’ll get a rolled up tortilla with filling, which is then deep fried!

And as with the other dishes, you’ll get chips & salsa or chips & guac as a side.

With tostadas, you’re getting your bean and veggie fillings and toppings on a toasted tortilla. For the shell, you can just get the normal “tostada shells” they have. Then add:

And yet again, you’ll get chips with salsa or guac as a side.

If you don’t want any of the tortillas or shells, you can also get the same kinds of fillings and toppings in a Bowl meal, along with Mexican Rice.

Again, there’s no vegan cheese at Tijuana Flats. So how do you get vegan nachos? Well, it’s basically chips with a bunch of bean and veggie toppings.

Ingredients to Choose From:

I would ask for “No Cheese” specifically on this. The Tijuana Flats website doesn’t really acknowledge the presence of cheese in the nutrition facts, but the promo photo has cheese on top of the beans. So I would definitely ask, to know what to expect and to get it vegan.

These are confirmed lard-free. But as with the black beans, I’d ask for “No Cheese” specifically.

The Tijuana Flats website doesn’t acknowledge any cheese in the nutrition facts, but the photo has cheese on top of the beans. So I’d ask, just so you know what to expect and make sure you get it vegan.

Just a side of rice. Can help you fill out any meal that seems to be lacking.

You’re probably going to have to order off of the kids menu to get this, but hey, apple sauce is a nice little sweet potential addition to your meal.

Most of the drinks are vegan, of course:

Tijuana Flats Churros are not vegan, as they contain egg and milk ingredients. Unfortunately, there are no vegan desserts at Tijuana Flats (unless you count apple sauce!).

Tijuana Flats Refried Beans are confirmed vegan. The company’s website explicitly states that both their refried beans and their black beans are lard-free.

I would just be sure to say that you want “No Cheese” when ordering a side of either of these beans (or any dish, really).

Tijuana Flats chips appear to be vegan. They are listed among the vegan options in the menu on the Tijuana Flats website.

After reviewing the vegan options at over 75 chain restaurants, I can also say that tortilla chips are almost always vegan. It’s rare for a restaurant to still cook them in lard or some other kind of animal fat.

What if you’re not just vegan but also trying to avoid processed foods? Can you get a whole-food plant-based (WFPB) meal at Tijuana Flats? Yes, actually!

To eat WFPB at Tijuana Flats, I would start with a “Salad” or a “Bowl.” You’re going to get most of the same ingredients either way, but maybe calling it a “Salad” will result in more greens and potentially a salad dressing added to it.

Here’s the thing: With the “Bowl” option and the “Salad” option, you’ve got choices for “Fillings” and “Toppings” you can include. So, basically you’re going to tell them to give you a bowl of veggies and black beans.

If you choose the “Salad” option, just be careful that they don’t give you an edible tortilla bowl that was deep-fried or anything.

If you prefer, you can also get your beans and veggies in a whole wheat tortilla as a burrito. But I’ve found that if you look into the actual ingredients of “whole wheat tortillas,” they sometimes only contain a bit more whole grain flour than white tortillas, and it’s still quite processed, potentially containing oil, too. So that’s up to you.