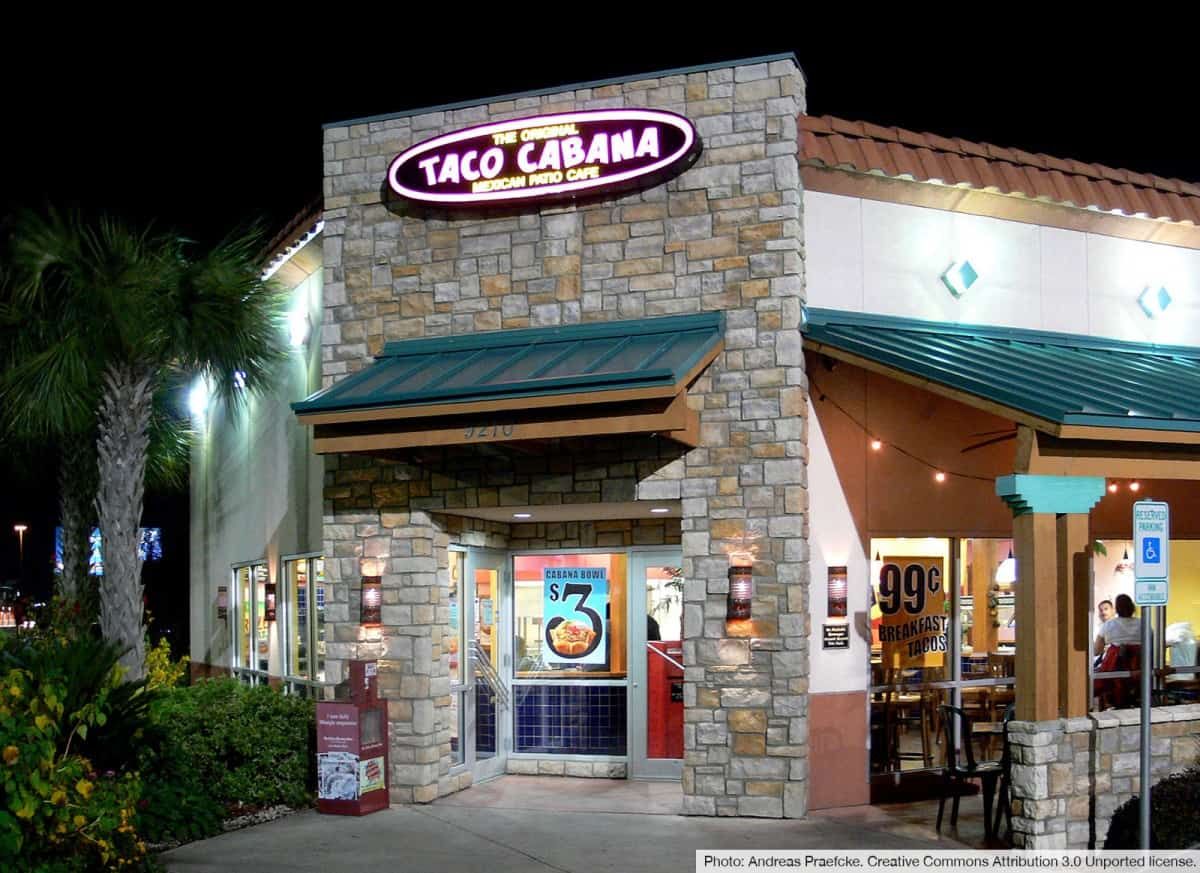 Taco Cabana is pretty great for vegans since they’ve added Beyond Meat. However, there are still some traps to watch out for, including non-vegetarian refried beans. With 14 years of vegan dining experience, I’m happy to be your guide!

Below, I’ll cover the details of how to order these items vegan. I’ll also share some menu items that are surprisingly NOT vegan, and answer your questions about the tortillas, among other things. I’ll end with a look at the whole-food plant-based options at Taco Cabana!

This vegan menu was compiled with the help of the allergen menu on the Taco Cabana website. I also consulted news websites and blogs.

Restaurant menus change and often vary by location. I recommend double checking any important information with staff at your local Taco Cabana.

A “Cabana Bowl” is basically a crispy shell in the shape of a bowl, filled with taco ingredients. The Beyond Meat Cabana Bowl is almost vegan by default. Just ask them to hold the sour cream.

After you exclude the sour cream, it just comes with rice, Beyond Meat, black beans, lettuce, pico de gallo, and guacamole. Filling, delicious, and vegan!

2. Beyond Meat Taco (No Cheese)

If eating a crispy edible bowl doesn’t appeal to you much, then you can also get Beyond Meat in a more traditional taco. Just be sure to request no cheese. You’ve got a few specific options:

Whichever one you get, it’s basically going to be shredded lettuce, diced tomatoes, and Beyond Meat in the taco shell of your choice. You could probably get them to add guacamole to replace the cheese.

Note on the soft-shell tortillas: It’s unclear whether the soft flour tortillas at Taco Cabana are vegan. The allergen menu contained some conflicting information. It may vary by location. The corn tortillas should be safe. But you may want to ask to double-check the wheat flour ones.

If Beyond Meat isn’t your thing, you can also get a black bean taco at Taco Cabana. Just be sure to request no cheese. And again, you might be able to get them to add guacamole to replace the cheese.

Note on soft-shell tortillas: It’s unclear whether the soft flour tortillas at Taco Cabana are vegan. The allergen menu contained some conflicting information. It may vary by location. The corn tortillas should be safe. But you may want to ask to double-check about the wheat flour ones.

Obviously the “Chips and Queso” are not vegan due to the dairy—but the Chips and Guac are good to go! The tortilla chips aren’t cooked in animal fat or anything sketchy like that.

If you prefer salsa rather than guacamole, they should be able to swap that in, as well.

The side of rice is vegan, of course. There’s nothing sketchy going on with broth or lard or butter in the rice. Looks like it comes standard with some poblano peppers, tomatoes, and spices cooked in.

The side of black beans is another vegan option. Combine this with the side of rice above for a simple meal just from the sides. (I actually do that at Chipotle all the time because it comes out so cheap.)

If you happen to stop by Taco Cabana for breakfast, go for the Seasoned Potatoes! It’s a simple side, but yummy and 100% vegan.

Here are some vegan sauces and toppings you can add to your taco or other dish:

Plenty of vegan options for drinks:

You might think the following items would be vegan, too—but unfortunately, they’re not:

Now let’s answer some other common questions about how to eat vegan at Taco Cabana:

Taco Cabana Sopapillas don’t appear to be vegan. They contain dairy according to Taco Cabana’s website. They come with honey and dulce de leche as dipping sauces.

Taco Cabana refried beans are not vegetarian or vegan. However, their black beans are vegan, and they now offer Beyond Meat, as well. (source)

Do Taco Cabana Beans Have Lard?

It is unclear whether Taco Cabana beans actually contain lard. But we know their Refried Beans and Borracho Beans are non-vegetarian, and we know that their black beans are fully vegan. (source)

Are the Tortillas at Taco Cabana Vegan?

What Is Beyond Meat at Taco Cabana?

Beyond Meat is a plant-based protein now offered at Taco Cabana. It is made from canola oil, pea protein, and other plant-based ingredients.

Beyond Meat is 100% vegetarian and vegan-friendly. Many people find it to be one of the most realistic meat substitutes currently available.

What if you’re not just vegan but also trying to avoid processed foods? Can you get a whole-food plant-based (WFPB) meal at Taco Cabana? Let’s take a look.

My best guess at the WFPB options at Taco Cabana:

Beyond Meat is very far from being WFPB, as several of the top ingredients are refined oil.

Most people would not count white rice as WFPB, but if you do, then you could get black beans and white rice with some veggies in it.

Basically, Taco Cabana is not made for WFPB eating. But if you’re a more general vegan, you’ve got quite a few options here, especially since they’ve added Beyond Meat!