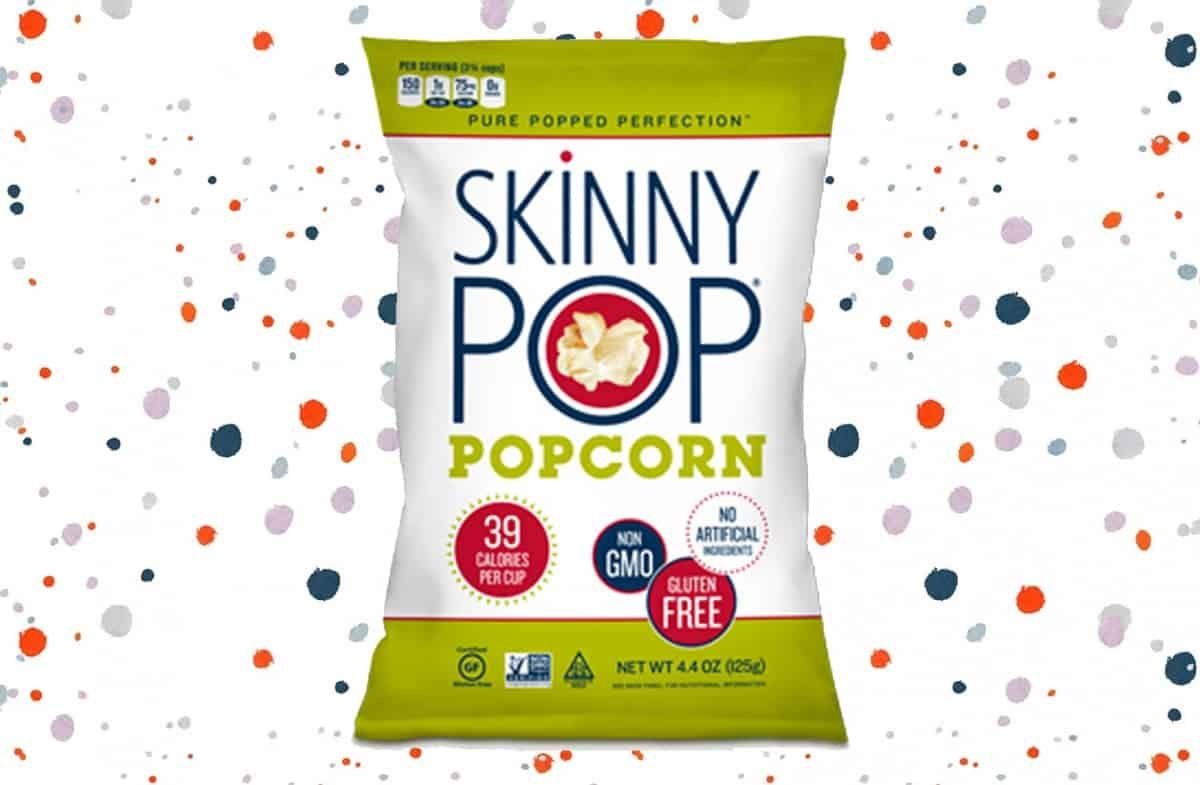 Whenever I’m in airports or gas stations, the one packaged food I can’t resist buying is ready-to-eat popcorn like Skinny Pop. After eating probably 20 to 40 bags of this stuff myself, today I finally decided to do a deep dive into the nutrition. So, is Skinny Pop Healthy?

Skinny Pop is moderately healthy. It is relatively low in calories and sodium, and it contains whole grain with some fiber (3g per serving). That said, Skinny Pop also contains quite a bit sunflower oil, which makes it less healthy than oil-free air-popped popcorn.

Below, I’ll answer 12 more health questions about Skinny Pop: Does it count as “processed”? Is it good for weight loss? Is it healthier than microwave popcorn? And more!

Here are all the questions I answer below:

1. Is Skinny Pop a Processed Food?

Skinny Pop is considered a processed food, as it contains sunflower oil. In fact, more than half of the calories in Skinny Pop come from the processed oil. However, Skinny Pop also contains whole grain, and it’s sugar-free—so it is healthier than many processed foods.

In the real world, foods are not simply “good” or bad”—there’s a whole spectrum of health, and many factors to look at. Skinny Pop is not really on the positive extreme of “clean eating,” but it’s not on the negative extreme of “junk food,” either. It’s in the middle.

Most nutritionists would advise that it is fine to eat foods like Skinny Pop in moderation. However, it is best not to eat the whole bag in one sitting.

As popcorn is medium on the glycemic index, large portions can spike your blood sugar. Also, large portions can contain a lot of calories, sodium, and omega-6 fat from the sunflower oil (which could cause inflammation if not balanced with omega-3s).

But if you eat foods like Skinny Pop in a balanced, healthy diet with plenty of vegetables, fruits, beans, nuts and seeds, it shouldn’t be a problem.

Skinny Pop won’t “make you fat” or “make you lose weight” by itself, though. It all depends on your total calorie balance—your overall diet and lifestyle. If you’re watching your portion sizes and your overall diet, you can eat Skinny Pop on a diet.

But again, the lowest-calorie popcorn is air-popped—using an air popper like this one, or a microwave bowl like this.

When you air-pop your own popcorn without oil, the caloric density goes way down. You can eat a huge bowl of air-popped popcorn, and it still won’t be many calories.

3. Is Skinny Pop a Good Source of Fiber?

Another thing to consider is that popcorn is medium on the glycemic index. That means the carbs in popcorn are broken down into sugars in your body pretty quickly.

So if you’re concerned about sugar, you may want to limit your overall carbs from popcorn and other medium- and high-glycemic carbs, too. I personally found that sugar-free high-glycemic carbs had a similar effect on my acne as sugar. More about that here.

Skinny Pop is not low fat. The original flavor has 10 grams of fat in each serving. This means about 60% of the calories are from fat. Almost all of the fat is from sunflower oil, so it is mostly polyunsaturated fat.

Skinny Pop also has 15 grams of carbohydrates per serving, so it’s not low-carb, either. In terms of macronutrients, it is the lowest in protein, with only 2 grams per serving.

Also, remember: Popcorn is a puffed grain. This is one of the less-healthy kinds of whole grains. That’s because puffed grains are digested more quickly than in-tact grains. They spike blood-sugar levels more for many people.

7. Is Skinny Pop Low in Cholesterol?

Skinny Pop contains 0mg of dietary cholesterol—so it is definitely low in cholesterol. In addition, Skinny Pop is also low in saturated fat (1 gram per serving), which is a type of fat that raises LDL cholesterol levels.

8. Does Skinny Pop Have Refined Carbs?

Skinny Pop does not contain refined carbs. It contains refined oil in the form of sunflower oil, but the carbs come from popcorn, which is a whole grain.

However, there’s more to the story: Popcorn is a puffed grain. This is one of the less-healthy kinds of whole grains, relatively speaking. This is because puffed grains get digested quite a bit more quickly than in-tact grains. This allows them to spike our blood-sugar levels more.

Many people will do fine with puffed grains like popcorn, but they shouldn’t necessarily be considered as healthy as in-tact whole grains. Learn more in “Whole Grain Hierarchy.

Skinny Pop is healthier than most brands of microwave popcorn due to the type of oil used. Skinny Pop contains sunflower oil, while most microwave popcorn has palm oil. Palm oil is high in saturated fat, which may raise LDL cholesterol and heart disease risk.

Skinny Pop is also healthier than microwave popcorn in a couple of other ways. Typically, it has less salt, and it doesn’t contain any butter. Butter is yet another source of saturated fat, which again is not very heart-healthy.

That said, Skinny Pop is still a bit salty. So if you eat a whole big bag of Skinny Pop, the sodium content will still add up to hundreds of milligrams (depending on the size of the bag). Exercise awareness and portion control.

While original Skinny Pop is pretty healthy aside from the sunflower oil, Skinny Pop Kettle Corn has multiple strikes on it: The sunflower oil is still there, but now it’s paired with processed sugar, and extra salt, too.

I’ve written a few other helpful guides to popcorn-related topics that you may want to read: