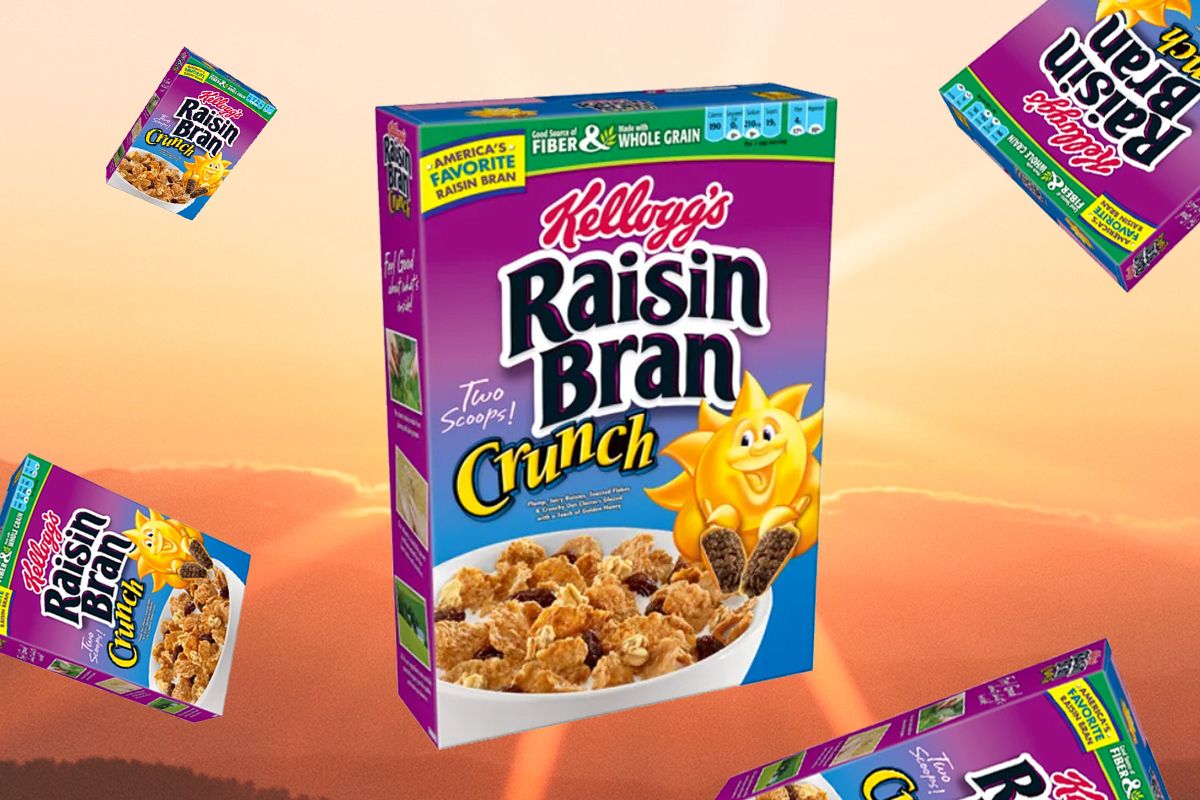 “Raisin Bran” sounds like it would be healthy. I mean, raisins are fruit. And bran is high in fiber, right? Well, today let’s look a bit deeper. Let’s specifically check out Raisin Bran Crunch. Is this healthy-looking cereal actually good for you?

Raisin Bran Crunch is not very healthy overall because has 13g of added sugar per serving, making it one of the highest-sugar cereals sold today. That said, it is made with whole grains and has moderate fiber content, so it is not the worst cereal for you, either.

Below, I’ll explore Raisin Bran Crunch’s nutrition in detail, comparing it to other cereals. I’ll discuss whether it’s good for weight loss, whether it can cause acne, and more. I’ll also share what I think is actually the healthiest raisin bran you can buy.

Is Raisin Bran Crunch Good for You?

Here are the 8 specific questions I’ll be answering about Raisin Bran Crunch nutrition. Click any of them to skip ahead to that section—or just keep scrolling to read them all:

1. What Is Raisin Bran Crunch Made Of?

Let’s start by looking at the actual ingredients for Raisin Bran Crunch:

Raisin Bran Crunch’s ingredients are a mix of good and bad. The key to whether it’s really “healthy” may come down to questions like, How much sugar is there? How much fiber? And so on.

So, let’s take a look at those kinds of questions next.

So, for me personally, any amount of “added sugar” is a negative. Unfortunately, most popular foods today come with a bunch of sugar. And Raisin Bran Crunch is no exception.

Here is a table comparing the sugar content of Raisin Bran Crunch to other popular cereal brands:

Raisin Bran Crunch has the most added sugar per serving of any cereal I checked. However, it’s worth noting the serving sizes, too.

To be fair, one serving of Raisin Bran Crunch has 55g of cereal—that’s a bit more than you get in one serving of Frosted Flakes, in terms of weight. So it may not be fair to just compare the sugar content per serving exactly.

So if you have blood-sugar issues, you may want to avoid Raisin Bran Crunch or strictly limit your portion sizes.

Raisin Bran Crunch has a moderate amount of fiber, with 4g of fiber per serving or about 7g per 100g of cereal. That’s about three times as much fiber as Corn Flakes, but still less fiber than Cheerios, Weetabix, or Shredded Wheat.

Here is a table showing exactly how Raisin Bran Crunch compares to several other popular cereals for fiber content:

As you can see, Raisin Bran Crunch is by no means the highest-fiber cereal… But it’s not the lowest either, thanks to being made with whole grains and wheat bran.

Raisin Bran Crunch is not a great source of iron. It supplies only 1mg of iron per serving, which is about 6% of the daily value for iron, based on the needs of an adult with a 2,000 calorie diet.

If you’re looking for a fiber-rich cereal that is a better source of iron, you may want to look at Cheerios or Weetabix. They are both fortified with iron, so they give you a lot more.

And if you need to improve your iron levels, I have another tip for you: Eat vitamin C at the same meal as your iron-rich foods. Vitamin C is shown to improve absorption of non-heme iron when eaten together.

So, if iron is what you’re focused on, you may want to ditch the Raisin Bran Crunch, and switch to Cheerios with vitamin-C rich fruits.

Raisin Bran Crunch is not the best choice for a weight-loss diet. There are other cereals that could help fill you up with more fiber, less sugar, and perhaps keep you better satisfied while in a calorie deficit.

Raisin Bran Crunch is honestly pretty high in calories, as it has quite a bit of processed sugar. Any processed ingredients (including sugar) tend to have a relatively high caloric density, as the bulk and fiber are removed. But if you want to lose weight, it helps to focus on low calorie-density foods.

By itself, a few servings of Raisin Bran Crunch will not make or break your weight loss diet, though. Weight loss depends on your overall diet and lifestyle.

If you’re burning more calories than you’re eating overall, you should lose weight. Eating some Raisin Bran Crunch or other “processed foods” on occasion will not ruin your diet as long as that overall pattern is in tact.

6. Can Raisin Bran Crunch Cause Acne?

The relationship between diet and acne is still evolving. But there is growing evidence that diet does play a major role in acne. And there are a few specific types of foods that are widely acknowledged as problematic.

The first big problem food for acne is dairy: Milk, cheese, ice cream, and so on. So if you’re eating your Raisin Bran Crunch with cow’s milk, that could already be aggravating your acne.

But the second kind of acne problem food is even more closely associated with Raisin Bran Crunch. It’s sugar. As covered above, Raisin Bran Crunch has a lot of sugar in each serving (19 grams of total sugars)—plus it has more carbs from the grain-based flour.

Interestingly, this means that for many acne sufferers, reducing acne is about stabilizing your blood-sugar levels. And often, that means cutting out high-GI carbs like those found in Raisin Bran Crunch—or at least minimizing them.

Even the more “natural” sugars in Raisin Bran Crunch (raisins and honey) could contribute to blood-sugar spikes for many people, leading to potentially worse acne.

Personally, I found that cereal was one of the worst foods for my acne. Even if I chose cereals with “0g of sugar,” the high-GI processed flakes still often seemed to cause problems for me.

7. Which Raisin Bran Is Healthiest?

If you were limited to choosing between only the Kellogg’s Raisin Bran flavors, then the healthiest Raisin Bran would be the original one. All the other flavors, including Raisin Bran Crunch, have even more added sugar.

But thankfully, there are some actually healthier raisin bran brands out there, too.

The healthiest raisin bran is probably Uncle Sam Skinner’s Raisin Bran. It has 0g of added sugar. The only sugar is from the raisins. It also has more fiber than most other raisin bran cereals, with 8g of fiber per serving.

Another somewhat healthy option would be Nature’s Path Flax Plus Raisin Bran. It’s another high-fiber option, and it has flaxseeds for added health benefits. But unfortunately, it still has moderate sugar content, with 6g of added sugar per serving.

Most vegans avoid honey, as it is an animal ingredient. That said, many vegans let it slide because it’s not actually clear to what extent bees experience consciousness, suffering, or any kind of sentience.

Another potential vegan complaint against Raisin Bran Crunch would be that the sugar could be processed with animal bone char. But most vegans are not so picky as to boycott foods over that detail.