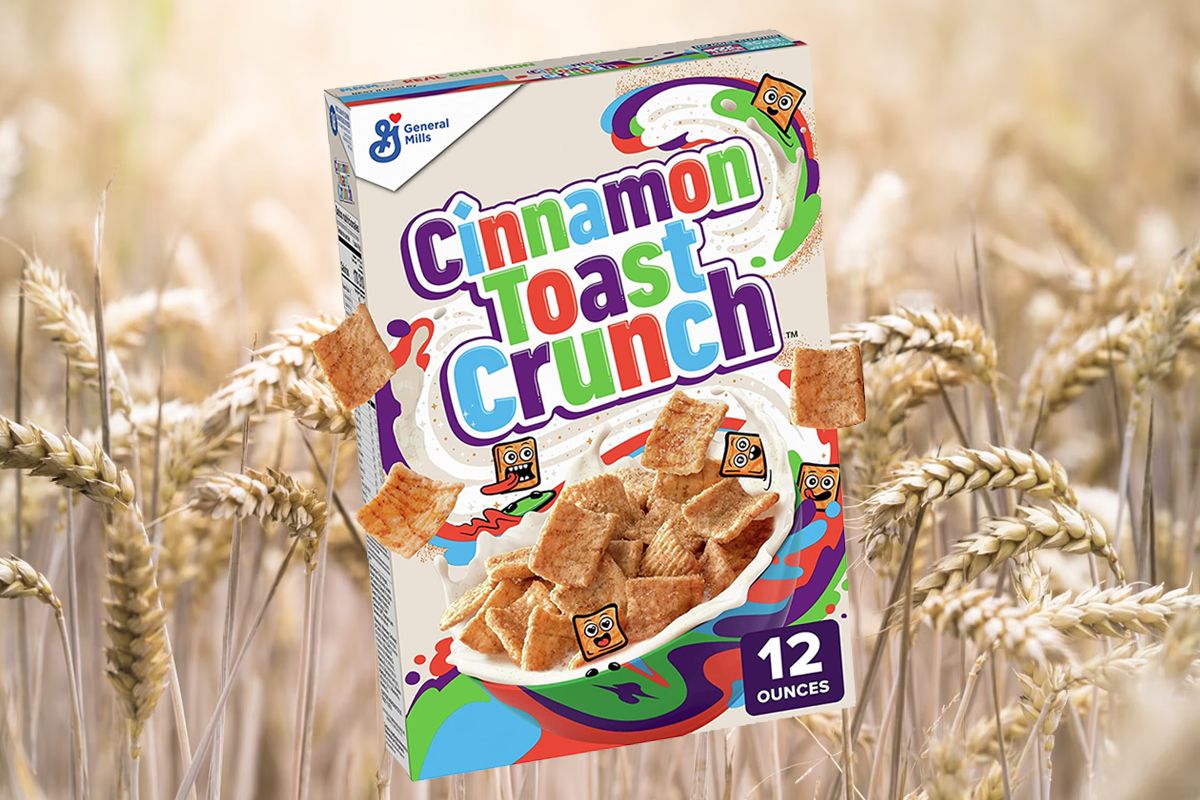 Is Cinnamon Toast Crunch Bad for You?

Here are the 11 questions I’ll be answering about Cinnamon Toast Crunch nutrition. Click any of them to skip ahead to that section—or just keep scrolling to read them all:

1. What Is Cinnamon Toast Crunch Made Of?

Let’s start by looking at the actual ingredients for Cinnamon Toast Crunch:

Like most foods, Cinnamon Toast Crunch has a mix of good and bad ingredients. But in my opinion, the biggest concern is just all that sugar.

So let’s take a closer look at the sugar content next.

2. Does Cinnamon Toast Crunch Have a Lot of Sugar?

Cinnamon Toast Crunch has 12 grams of sugar per serving (1 cup or 41g). This is six times the sugar found in Cheerios, and three times the sugar of Corn Flakes or Rice Krispies. It’s about the same amount of sugar as in Frosted Flakes or Froot Loops.

So, for me personally, any amount of “added sugar” is a negative. Unfortunately, most popular foods today come with a bunch of sugar.

Here is a table comparing the sugar content of Cinnamon Toast Crunch to other popular cereal brands:

As you can see, Cinnamon Toast Crunch is among the highest-sugar cereals in this list. And it’s worth noting: Aside from sugar, it also has some rice flour and other simple carbs that will turn into sugar in your body, too.

So if you have blood-sugar issues, you may want to avoid Cinnamon Toast Crunch or limit your portion sizes.

3. Does Cinnamon Toast Crunch Have Fiber?

Cinnamon Toast Crunch has a low to moderate amount of fiber. There are 2g of fiber per serving, or almost 5g of fiber per 100g of cereal. That’s about twice as much fiber as Corn Flakes, but much less fiber than Cheerios, Weetabix, or Shredded Wheat.

Fiber can help a bit to slow down the digestion of sugar and carbs. Fiber also comes with many other health benefits. And Cinnamon Toast Crunch has a little fiber due to the whole grain wheat.

Here is a table showing how Cinnamon Toast Crunch cereal compares to several other popular cereals for fiber content:

As you can see, Cinnamon Toast Crunch is nowhere near being the highest-fiber cereal… But it’s not the lowest either, thanks to being made with whole wheat.

4. Does Cinnamon Toast Crunch Have Iron?

Cinnamon Toast Crunch has about 3.6mg of iron per serving. That’s about 20% of the Daily Value (DV) for iron per serving, based on the needs of an adult with a 2,000 calorie diet.

If you need to improve your iron intake, I have a special tip for you, too: Eat vitamin C at the same meal as your Cinnamon Toast Crunch. Vitamin C is shown to improve absorption of non-heme iron when eaten together.

So have some fruit with your Cinnamon Toast Crunch! Here’s a list of high vitamin-C fruits to especially focus on.

5. Does Cinnamon Toast Crunch Have Protein?

None of the ingredients in Cinnamon Toast Crunch are particularly high in protein, but there’s still a little protein from the grains and other ingredients.

Obviously, your selection of milk can impact how much protein is in your bowl of cereal, too. If you’re choosing a plant-based milk, then soy milk or pea milk will likely have the most. Almond milk and rice milk are usually low in protein.

As someone who does a bit of bodybuilding and who loves cereal, I have a bonus cereal protein tip. Here it is: Mix protein powder into your milk before you pour it on your cereal. This simple change can turn cereal into a decently high-protein meal—while keeping it easy, quick, and delicious.

6. Can I Eat Cinnamon Toast Crunch and Still Lose Weight?

Cinnamon Toast Crunch would not be the best choice for a weight-loss diet. Other cereals could help fill you up with more fiber and less sugar, and perhaps keep you more satisfied in a calorie deficit. But certainly, you can still lose weight while eating this cereal.

Cinnamon Toast Crunch is not a low-calorie food since it has processed sugar and oil. Processed ingredients tend to have a relatively high caloric density, as the bulk and fiber are removed. To lose weight, it helps to focus on whole foods.

By itself, a few servings of Cinnamon Toast Crunch will not make or break your weight loss diet, though. Weight loss depends on your overall diet and lifestyle.

If you’re burning more calories than you’re eating each week overall, you should lose weight. Eating some Cinnamon Toast Crunch or other “processed foods” on occasion will not ruin your diet, as long as that overall pattern is in tact.

7. Can Cinnamon Toast Crunch Cause Acne?

The relationship between diet and acne is still evolving. But increasingly, there is significant evidence that diet does play a major role in acne. And there are a few specific types of foods that are widely acknowledged as problematic.

The first big problem food for acne is dairy: Milk, cheese, ice cream, and so on. So if you’re eating your Cinnamon Toast Crunch with cow’s milk, that could already be aggravating your acne.

But the second kind of acne problem food is even more closely associated with Cinnamon Toast Crunch. It’s sugar. As covered above, this cereal has a fair amount of sugar in each serving (12 grams)—plus it has more carbs from the grain-based flour.

Interestingly, this means that for many people with acne, reducing acne is about stabilizing your blood-sugar levels. And often, that means cutting out high-GI carbs like those found in Cinnamon Toast Crunch—or at least minimizing them.

Personally, I found that cereal was one of the worst foods for my acne. Even if I chose whole-grain cereals with “no added sugar,” the high-GI processed flakes still often caused problems for me.

8. What Happens if You Eat Cinnamon Toast Crunch Every Day?

However, if you eat large portions and excess calories—and if your overall diet and lifestyle is unhealthy—that could cause more bad consequences long-term. What kind of specific issues? Well…

Eating Cinnamon Toast Crunch may spike your blood sugar. Blood sugar spikes can have many negative short- and long-term effects. These can potentially include:

Also, Cinnamon Toast Crunch may lead you to eat excess calories. Since it’s a processed food with a high calorie-density, it’s easy to overeat. And if you overeat calories too often, you could have weight gain and associated health issues.

Cinnamon Toast Crunch would generally not be considered healthier than Frosted Flakes. In fact, Frosted Flakes may be slightly healthier, as it has 30% fewer calories and 20% less sodium per serving (1 cup). Neither cereal is considered very healthy.

Here is a table comparing these two cereals:

Overall, neither cereal is very healthy, but Cinnamon Toast Crunch may be slightly worse.

What if you’re trying to gain weight and build muscle? Is Cinnamon Toast Crunch a good choice? Well, it depends a bit on your priorities. It can get the job done, but it may not be the best option.

Most people still want to eat somewhat healthy while bulking. If you eat too much junk food, you may end up gaining a lot of unnecessary fat during your bulk. And honestly, Cinnamon Toast Crunch is a bit of a junk food.

The best cereal for a bulk might be something like shredded wheat or oats. Those are healthy sources of carbs, without much dietary fat. (Or you can choose Mini-Wheats, if you want to model Alex Hormozi’s crazy 6-week bulk where he gained 35 pounds.)

To make sure you get enough protein, you may want to choose a high-protein milk, or add protein powder into your milk. If you eat a lot of Cinnamon Toast Crunch with rice milk or almond milk, you won’t be getting a lot of protein.

Cinnamon Toast Crunch is generally considered vegan. However, it does have sugar, which is a gray-area ingredient some vegans avoid. The reason is that non-organic cane sugar is often filtered with animal bone char in the production process.

The only vegan complaint I could see against Cinnamon Toast Crunch is that the sugar could be processed with bone char. But most vegans are not so picky to boycott foods over that detail.

Most vegans would argue that Cinnamon Toast Crunch is vegan—just don’t eat it with real cow’s milk.