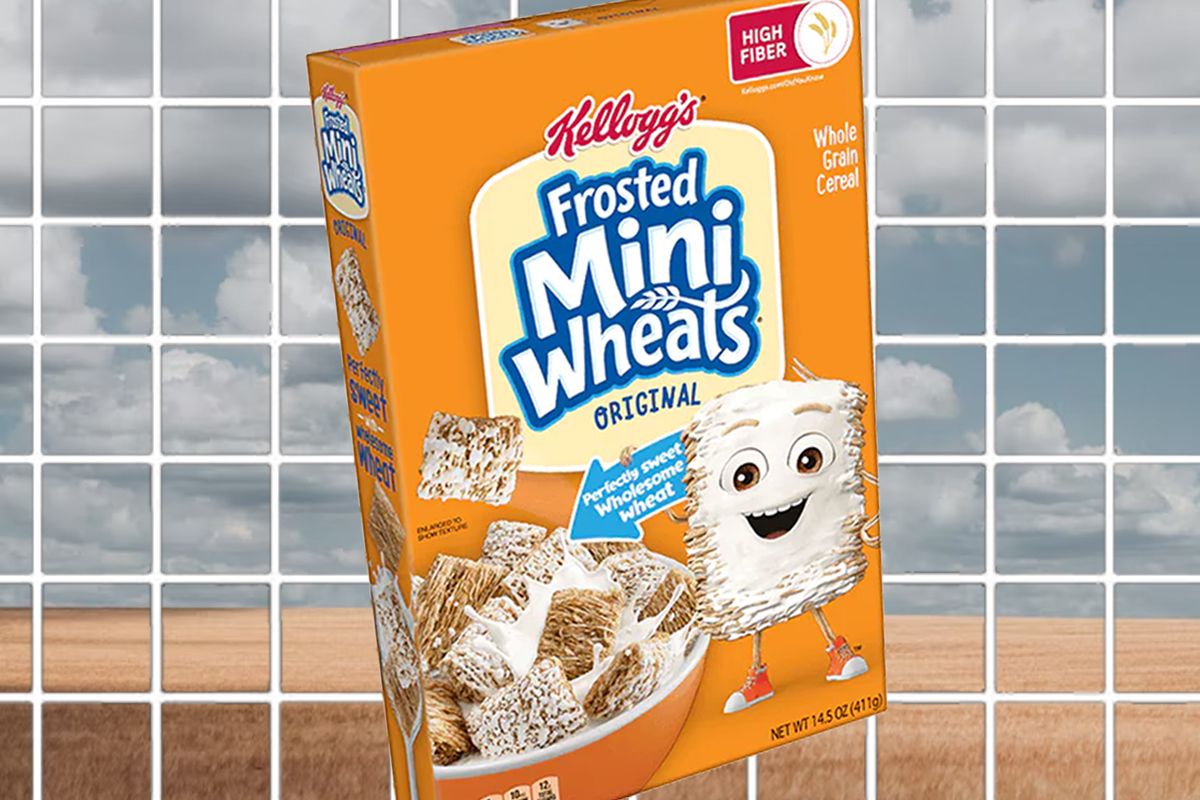 What happens if you take a healthy, whole-grain cereal, and then you add a bunch of sugar to it? Well, of course—you get Frosted Mini-Wheats! This cereal is basically a frosted version of shredded wheat, and today, we’re going to answer: Is it healthy?

Below, I’ll compare the sugar and fiber content of Frosted Mini-Wheats to other popular cereals, and I’ll answer whether it’s a good choice for weight loss. Then I’ll do extended comparisons with Cheerios and Raisin Bran, to show which is healthiest!

Are Frosted Mini-Wheats Good for You?

Here are the 8 questions I’ll be answering about Frosted Mini-Wheats nutrition. Click any of them to skip ahead to that section—or just keep scrolling to read them all:

1. What Are the Ingredients in Frosted Mini-Wheats?

Let’s start by discussing what Frosted Mini-Wheats are actually made of. I’ll share my analysis below:

Overall, it’s great that Frosted Mini-Wheats have real whole wheat. But all the added sugar is a bit concerning to me. In the next section, let’s take a closer look at the sugar content of this cereal.

2. Do Frosted Mini-Wheats Have Added Sugar?

Frosted Mini-Wheats have quite a lot of added sugar, with 12 grams per serving (25 biscuits or 60g). That is the same amount of sugar in a serving of Frosted Flakes or Froot Loops. It’s about six times the sugar found in a serving of Cheerios.

The frosting on these Mini-Wheats is certainly delicious—but it comes at a cost. The American Heart Association recommends a limit of 25g of sugar per day for women and 36g per day for men.

But keep in mind: No added sugar is needed for human health. Really, the healthiest diet would likely just have natural sugar from fruit and whole foods. So for me personally, any amount of “added sugar” is a negative.

Here’s a table comparing the sugar content of many popular cereals, including Frosted Mini-Wheats (bolded):

As you can see, Frosted Mini-Wheats are not quite the highest-sugar cereal here. Froot Loops, Frosted Flakes, and Raisin Bran all have more total sugar by mass.

But you can also see, there are cereals with much lower sugar, if that’s a priority of yours. (Meanwhile, if you’d like a “lower sugar” version of Mini-Wheats, you could always mix your Frosted Mini-Wheats in with some plain Shredded Wheat!)

3. Are Frosted Mini-Wheats a Good Source of Fiber?

Here is a table showing exactly how Frosted Mini-Wheats compare to several other popular cereals for fiber content:

As you can see, Frosted Mini-Wheats are by no means the highest-fiber cereal… But it’s a relatively high-fiber choice, thanks to being made with whole grain wheat.

4. Do Frosted Mini-Wheats Have Protein?

None of the ingredients in Mini-Wheats are super high in protein, but there’s still a bit of protein from the wheat. About 10% of Frosted Mini-Wheats’ calories come from protein.

Obviously, your selection of milk can impact how much protein is in your cereal, too. If you’re choosing a plant-based milk, then soy milk or pea milk will likely have the most. Almond milk and rice milk are usually low in protein.

As someone who does a bit of bodybuilding and who loves cereal, I have a bonus cereal protein tip. Here it is: Mix protein powder into your milk before you pour it on your cereal. This simple change can turn cereal into a decently high-protein meal—while keeping it easy, quick, and delicious.

Frosted Mini-Wheats are one of the many food products today that contain both healthy and unhealthy ingredients. Despite the healthy aspects that come from the whole wheat, it is still a processed food that contains refined sugar.

Frosted Mini-Wheats are an okay food to include in a weight-loss diet, but they’re not completely ideal. Compared to other cereals, they have a lot of fiber to help fill you up—but they also have empty calories, with 12g of added sugar per serving.

By itself, a few servings of Frosted Mini-Wheats will not make or break your weight loss diet. Weight loss depends on your overall diet and lifestyle.

For that reason, an even better weight-loss cereal is plain shredded wheat—without frosting. Eating that cereal, you’d likely feel fuller for longer, on fewer calories. If it’s too bland, you can add some fruit or other sources of healthy sweetness (like fruit).

You can also aid your weight loss journey with your choice of milk. Did you know that unsweetened almond milk is only about 30 calories per cup? That’s only ~25% of the calories of 2% cow’s milk!

In the end, as long as you’re burning more calories than you’re eating each day/week overall, you should be able to lose weight—whether those calories include Frosted Mini-Wheats or not. But sure, this cereal could fit into a smart weight-loss plan.

7. Are Frosted Mini-Wheats Healthier Than Cheerios?

Due to the different serving sizes, it can be a little tricky to compare Mini-Wheats and Cheerios side by side. But let’s do our best to assess which is the healthier cereal:

Both cereals have relatively simple ingredients. If you’re vegan or gluten-free, then Mini-Wheats are a no-go, and Cheerios is the default winner for you. But otherwise, the ingredients are basically fine for either of these cereals.

Again, the most important difference is probably the sugar content, making Cheerios healthier. But if you’re on a very low-sodium diet, you may want to consider the higher sodium content of Cheerios.

Now let’s compare Mini-Wheats with Raisin Bran. This comparison is a little trickier:

Again, both cereals have relatively simple ingredients—both are made with whole wheat. Raisin Bran is a vegan option, but neither cereal is gluten-free.

It’s really hard to say which of these cereals is healthier. If you have blood-sugar issues, you should probably avoid both—but especially, I could see Raisin Bran giving you trouble. The “total sugar” is quite high at 17g per serving.