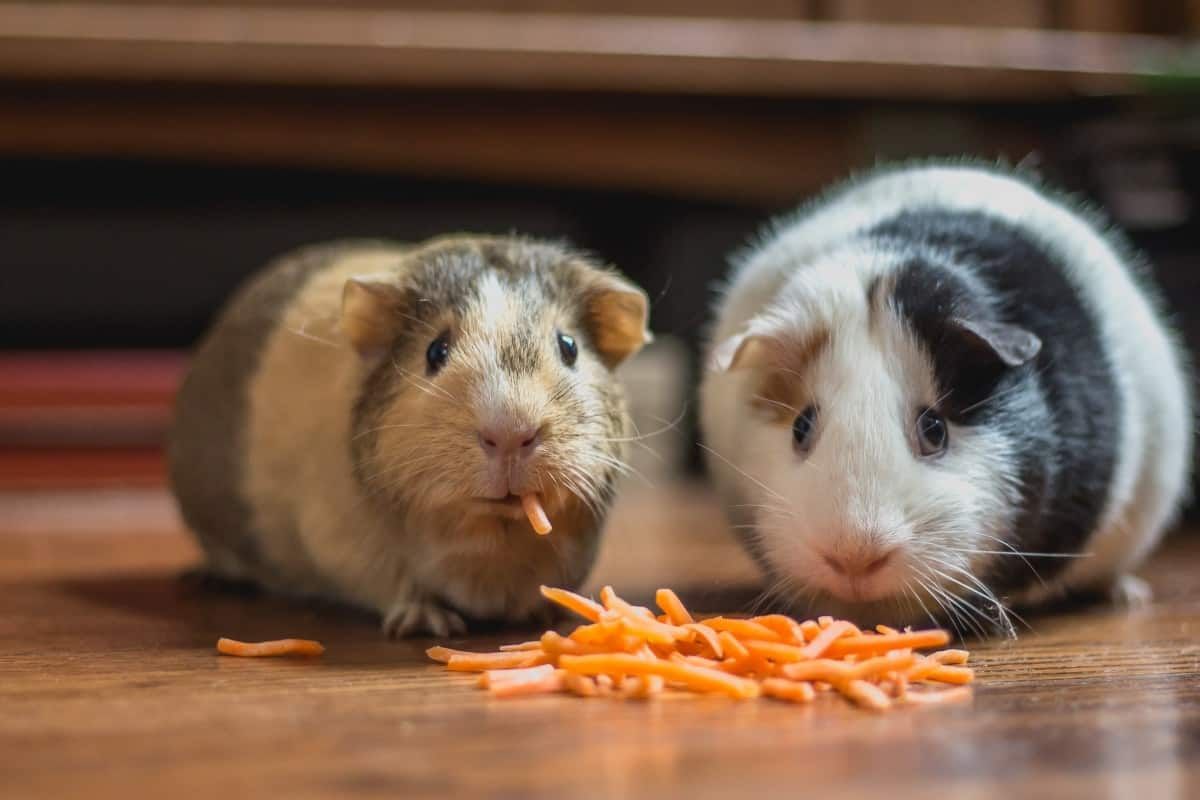 There are a few points of controversy when it comes to vegans with pets. The first is the question of whether “pet ownership” is vegan at all. Some vegans believe “owning” another animal is fundamentally counter to the idea of animal liberation.

In practice, most vegans are okay with owning pets… But there’s another question that becomes a bigger hang up: “Can I feed my pet a vegan diet? Or is it wrong to ‘force’ my pet to be vegan with me?”

In this post, I want to provide a list of herbivorous pets that will be totally happy just eating plants with you!

Which Pets Can Be Vegan?

First, a disclaimer: The following pets are not all strictly categorized as “herbivores.” Some of them are technically omnivores (like humans). However, these animals all thrive on a well-planned, plant-based, vegan diet.

They all have diets that are very heavily plant-based in nature, and they all have many anecdotes of successfully being kept vegan. (I’ve tried to mention any controversies about this fact where they exist.)

Obviously, you should do further research before choosing to get any of these pets. There are many factors in choosing the right pet for you!

For example, some of the vegetarian reptiles on this list require very specific living conditions and are quite high maintenance compared to a much simpler pet like the silver dollar fish.

Rabbits are 100% herbivorous, so there’s no conflict at all with feeding them a vegan diet!

About 80 to 90 percent of a rabbit’s diet should be fresh hay. This can be oat hay, orchard grass, timothy, or others. Rabbits will also typically eat some pellets (also made of hay), vegetables, and a small amount of fruit. (source)

But just because bunnies are vegan doesn’t mean you can feed them any vegan food you want. There are specific veggies that you should not feed rabbits. And legumes, nuts, and seeds also should not be fed to rabbits.

Guinea pigs are true herbivores. So you don’t have to worry about distorting their natural diet whatsoever by making them vegan.

A proper guinea pig diet will include a mix of hay, pellets, vegetables, and less than 10% of the diet from fruits and treats. (source)

Like rabbits, guinea pigs also eat a bit of their own poop. Don’t worry—this is natural and healthy. The “poop” they eat is actually a special kind, called “cecotropes.” It allows them to get extra nutrition from it. (source)

Technically, tortoises are herbivores, while turtles are omnivores. So go with a tortoise.

About 80% of a tortoise’s diet should be fresh vegetables. The rest of the diet will be made up of a mix of fruit, hay, or commercial tortoise food. (source)

You’ll also have to make sure your tortoise gets some calcium and multivitamin supplementation, but there’s no reason these need to use animal ingredients, either.

4. Silver Dollars (And Many Other Fish)

There are a whole bunch of herbivorous pet fish. And there are plenty of omnivorous fish that can thrive on a vegan diet, as well.

I’ll just describe the diet of silver dollars as an example of a vegan fish diet.

You’ll mainly feed your silver dollar fish pellets or flakes that are formulated for herbivorous fish, whether it’s kelp-based, spirulina-based, or something else. You can also feed them cooked veggies like carrots and squash, or give them algae wafers. (source)

Pet gerbils often eat seed mixes as their main diet, or else plant-based pellets or lab blocks. The pellets and lab blocks come pre-balanced with all the nutrients gerbils need, so that’s an advantage of going that route. (source)

Just don’t assume that every brand of pellets will be 100% vegan. I quickly glanced at a few, and I saw “fish meal” and “yogurt” in some. So be discerning. But you should be able to find vegan options without much hassle.

You can also supplement your gerbil’s diet with fruits and veggies, whole grain bread, whole grain cereal, and things like that. Lots of vegan feeding options!

Hamsters also eat plant-based diets, though it may be a bit controversial to keep them 100% vegan. (source)

6. Parakeets (And Some Other Birds)

Most birds naturally eat worms, insects, and the like. But there are birds that do thrive on plant-based diets. These include various kinds of parrots, including parakeets.

Parakeets eat a mix of plant-based foods, such as: Pellets, vegetables, fruits, nuts, occasional grains, and even legumes (beans).

You also may want to give them vitamin supplements. Typically, seeds or pellets will be the main food source for parakeets, followed by vegetables. (source)

Feeding dogs a vegan diet is viewed as controversial by some, as dogs are omnivores. However, it’s pretty well established that dogs can thrive on a well-planned vegan diet.

Actually, some dogs get prescribed vegan diets because of allergies. Many dogs are allergic to chicken, beef, or other meats. So a vegan diet can sometimes help to improve a dog’s health.

There are a growing number of brands of vegan dog food and vegan dog treats on the market today. I covered some of these in my big blog post on whether cats and dogs can be vegan.

Overall, if you’re trying to feed a dog a vegan diet, you need to do your research and be careful—but there are plenty of resources and plenty of success stories you can find from other vegan dog owners.

Chuckwallas are one of the few reptiles that can be vegan. They are technically omnivores, but they are typically kept as herbivores. They can only occasionally be given non-vegan treats.

A typical diet for a chuckwalla will consist mainly of daily salads/veggies, flowers, roughage, and seeds. There are lists of veggies to avoid feeding your chuckwalla, too—so do your research. (source)

Chuckwallas have more specific needs than a lot of the pets listed in this post. Before getting one, make sure you’re able to provide the right living enclosure, heat, UV light, and so on.

Personally, I feel like chinchillas are probably the cutest animal on this whole list! Thank goodness they’re vegan! I don’t have one currently, but it may happen eventually…

Chinchillas mainly eat hay, with the addition of hay-based pellets. This makes their diet quite similar to rabbits. They can also have small amounts of root vegetables and dried fruit, plantain, and dried herbs. (source)

Iguanas are crazy. Many kinds of iguanas actually grow to be huge—up to five or six feet long. And of course, they look awesome. The fact that they’re herbivores is quite a fun treat for potential vegan pet owners.

The vast majority of your iguana’s diet should be dark green leafy vegetables (80 to 90% of the diet). Only the last 20% or less should be fruit or other treats. (source)

It’s generally advised not to feed your iguana any animal protein—or to keep it less than 5% of the diet. So, really, iguanas and vegans are a match made in heaven.

Uromastyx lizards eat a predominantly herbivorous diet in the wild, with insects making up only 4% or less of their natural diet. It is unnecessary to include any insects in your uromastyx lizard’s diet.

Green leafy vegetables should make up the majority of the Uromastyx diet. Other veggies, dry beans and seeds, flowers, weeds, and a small amount of fruits are usually included, as well. (source)

As with chuckwallas above, take note that Uromastyx lizards have specific needs as far as temperature, lighting, etc. Make sure you can provide the right environment and care before committing to this pet.

Rats are omnivores, but they are not obligate omnivores. They are opportunistic scavengers, and although it is a bit controversial, they can thrive on a well-planned vegan diet.

The bulk of a proper rat diet will be grain (50 to 60%). Fruit and vegetables will come in second and third place in the diet. Lastly, they do need “protein,” but this can be met with plant foods.

There are some sources that say rats need animal protein, but several leading brands of rat food are vegetarian, and there are many anecdotes you can find of happy, healthy vegan rats.

The Solomon Island Skink is also known as the Monkey-Tailed Skink. They are another one of the rare kinds of herbivore reptile pets.

Their diet is mainly comprised of vegetables like kale, cooked sweet potato, and green beans. Fruit is also a welcome addition. (source)

Getting a Solomon Island Skink is a big commitment. They have sharp claws, can have brutal bites, and can be a bit unpredictable. Since they’re an exotic reptile, you may want to ensure there is a good reptile vet nearby. They also live for up to 25 to 30 years! (source)

Well—that’s the end of my list of 13 herbivore pets… What did you think? Got any ideas for who your new best friend will be?